WHAT I DO WITH MY TIME BEING AN OLD FOLK 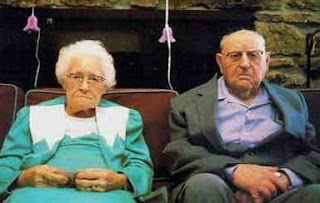 Working people frequently ask retired people what they do to make their days interesting. Well, for example, the other day my wife and I went into town and went into a shop. We were only in there for about 5 minutes.

When we came out, there was a cop writing out a parking ticket. We went up to him and said, 'Come on man, how about giving a senior citizen a break?'

He ignored us and continued writing the ticket.

I called him a Nazi turd.

He glared at me and started writing another ticket for having worn tyres+. So my wife called him a shit-head.

He finished the second ticket and put it on the windshield with the first.

Then he started writing a third ticket.

This went on for about 20 minutes.

The more we abused him, the more tickets he wrote.

Personally, we didn't care. We came into town by bus.

We try to have a little fun each day now that we're retired. It's important at our age.
Posted by Unknown at 7:00 AM No comments: 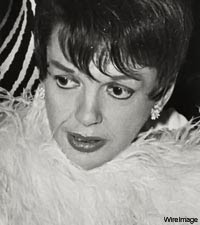 Judy, Judy, Judy: The divine Miss Garland lived out of hotels after admitting she owed more than $4 million in arrears. When the taxman came knocking in 1967, the financially troubled songbird might have hummed a few bars of 'I Can't Give You Anything but Love
Posted by Unknown at 6:57 AM No comments:

MEET YOUR ANCESTOR OF 4.4 MILLION YEARS AGO 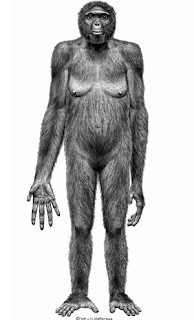 A treasure trove of 4.4-million-year-old fossils from the Ethiopian desert is dramatically overturning widely held ideas about the early evolution of humans and how they came to walk upright, even as it paints a remarkably detailed picture of early life in Africa, researchers reported today.

The centerpiece of the diverse collection of primate, animal and plant fossils is the near-complete skeleton of a human ancestor that demonstrates our earliest forebears looked nothing like a chimpanzee or other large primate, as is now commonly believed. Instead, the findings suggest that the last common ancestor of humans and primates, which existed nearly 2 million years earlier, was a primitive creature that shared few traits with modern-day members of either group.

The findings, analyzed in a large group of studies published today in the journal Science, also indicate that our ancestors began walking upright in woodlands, not on grassy savannas as prior generations of researchers had speculated.

The discovery of the specimen called Ardipithecus ramidus "is one of the most important discoveries for the study of human evolution," said paleoanthropologist David Pilbeam of Harvard University, who was not involved in the research. "The find itself is extraordinary, as were the enormous labors that went into the reconstruction of a skeleton shattered almost beyond repair," he said in an e-mailed statement.

"It is so rare to get a more or less complete skeleton," said paleoanthropologist Andrew Hill of Yale University. "In the entire course of human evolution, at least until you get to Neanderthals, there are only three to four available. We can always tell so much more from a skeleton" than from the jawbones and skulls that are more commonly found.

The fossils described in the new studies were found 15 years ago in the Afar Triangle of Ethiopia by a team led by paleoanthropologist Tim White of UC Berkeley. But White and his team have been relatively closemouthed about the fossils, and other researchers -- some of whom have accused him of hoarding the fossils for his own use -- have been eagerly awaiting more information.

Today, they are getting a surfeit: Eleven papers by 47 authors, and a similar number of short summaries prepared by each paper's authors.

The fossils were found in a layer of sediment sandwiched between two layers of volcanic ash, each dating from 4.4 million years ago -- indicating that the fossils are also of that age.

In addition to the nearly complete fossil specimen of the female primate, which investigators have dubbed Ardi, the team found more than 100 fossils from 36 other members of the same species.

"These fossils are much more important than Lucy," the 3.2-million-year-old specimen of Australopithecus afarensis that was found in the Afar desert in the 1970s, said paleoanthropologist Alan Walker of Pennsylvania State University, who was not involved in the research. "The reason is that when Lucy was found, we already knew the major features of Australopithecus from fossils found in the 1940s. . . . These fossils are of a completely unknown creature, and are much stranger and more primitive than Australopithecus."

The White team also found fossils of 29 species of birds, primarily small ones like doves, lovebirds, mousebirds, passerines and swifts, as well as several that were previously unknown. Animal fossils included 20 new species of small mammals, including shrews, bats, rodents, hares and small carnivores, as well as larger animals, including baboons, colobus monkeys and spiral-horned antelopes.

Fossilized wood, seed and other plant remains indicate the presence of hackberry, fig and palm trees. Collectively, these finds indicate that the environment was more humid and cooler than it is today, and contained grassy woodland with forest patches.

Today, the Afar is a desert. But go back in a time machine and "4.4 million years ago, this was really a different world," White said. "We look up in the trees and we see that they are full of monkeys. We look around on the ground and we see that there are a lot of kudus. And we see an occasional hyena. And we see elephants and we see lots of small mammals. And we know what all of these . . . are because we have found evidence of them."

This whole collection of data "gives us information we have never had before about human evolution," said paleoanthropologist C. Owen Lovejoy of Kent State University, one of the primary authors of the papers. "The whole savanna theory goes out the window in terms of it being the explanation for upright walking. . . . And the idea that we evolved from something like a chimpanzee also goes out the window."

Ardi stood about 47 inches tall and probably weighed 110 pounds. Many researchers had previously believed that such an early ancestor would, like modern chimps, be a knuckle-walker, using the knuckles for support while moving on all fours. Instead, Ardi appears to have climbed on all fours on branches, but walked upright on the ground. Her feet, like those of monkeys but not chimps, were designed more for propulsion than for grasping.

Her face had a projecting muzzle, giving her an ape-like appearance, but many features of her skull, such as the ridge above the eye socket, are quite different than those of chimpanzees. Her brain is about the same size as Lucy's.

Her hands lacked many of the specializations that allow modern-day African apes to swing, hang and easily move through trees. Those specializations apparently evolved in large primates after they separated from the last common ancestor with humans more than 6 million years ago. (Few fossils of such primates are available because they lived primarily in forests, which are not conducive to preservation of bone.)

The finds "are turning evolution on its head," Lovejoy said.

The most controversial aspects of the papers involve the authors' -- particularly Lovejoy's -- interpretations of what the fossils say about behavior. Of particular importance, he said, is that the sizes of males and females were about the same, and that the specimens do not have large, sharp canine teeth. Both findings suggest that the fierce, often violent competition among males for females in heat that characterizes gorillas and chimpanzees was absent in Ardipithecus.

That implies, Lovejoy concluded, that the males were beginning to enter into monogamous relationships with females and devoted a greater proportion of their time to caring for their young than did earlier ancestors.

"This is a restatement of Owen Lovejoy's ideas going back almost three decades, which I found unpersuasive then and still do," Pilbeam said. Hill was more blunt, calling Lovejoy's speculation "patent nonsense."
Posted by Unknown at 9:28 AM No comments: