Regardless of the debate over the origins of climate change, there's no disputing that the Earth has warmed considerably in recent years. And with this warming trend, the world's polar ice is melting rapidly, displacing the creatures that have long made these regions their habitat. 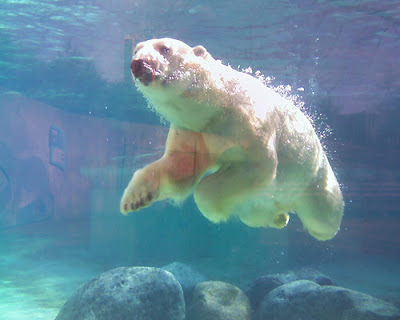 Take, for example, the polar bear. As the Los Angeles Times' Kim Murphy reports, the warming conditions in Alaska sent one polar bear on an epic quest for an ice floe -- in a tale that is by turns tragic and inspiring. According to the paper, the female bear -- whom scientists at at the U.S. Geological Survey, U.S. Fish and Wildlife Service and the University of Wyoming were monitoring via a collar equipped with a GPS tracking device -- spent nine days swimming across the Beaufort Sea in the Alaska region in a desperate hunt for a ice to settle on. At the outset, she was accompanied her cub, which sadly didn't survive the 426-mile trek through the freezing waters; she also lost more than 100 pounds during the search.

"Our activity data suggests that she swam constantly for nine days, without any rest. Which is pretty incredible," George M. Durner, a zoologist heading up a study of polar-bear migration, told Murphy. "We have observed other long-distance swimming events. I don't believe any of them have been as long in time and distance as what we observed with her ... How often does this happen? We're trying to get a handle on that."

A recent study found that arctic waters are the warmest they've been in centuries and environmental groups contend that officials in Alaska aren't adequately protecting the state's polar bears as their habitat rapidly disappears. Murphy notes that current Alaska Gov. Sean Parnell is seeking to suspend Endangered Species Act protections for polar bears in order to expedite oil and gas exploration in designated protected zones for the species. The Obama administration has designated 187,000 square miles in Alaska polar-bear protected zones, but Parnell and backers of expanded drilling in the region argue that rolling back the designation could bring in hundreds of millions of dollars of revenues for the state. 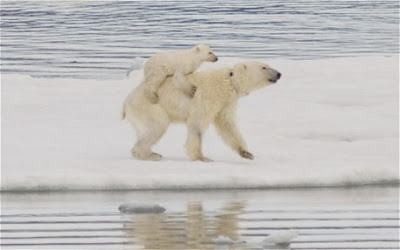 In a 2006 60 Minutes report, correspondent Scott Pelley said that scientists believe polar bears will be extinct by the end of the century if the current climate trends continue. Scientist Bob Corell told Pelley that he'd noted a steep decline recently in polar bear populations as polar ice has vanished, with today's surviving bears much skinnier than their predecessors of previous generations.
Posted by Unknown at 9:20 PM