SHARK ATTACKS SO FAR IN 2011 ON WEST COAST/WIZARDOFBAUM CHANNEL 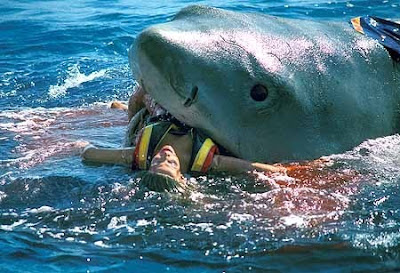 There were 7 authenticated unprovoked shark attacks reported from the Pacific Coast of North America during 2010. There were 5 attacks (1 fatal) from California and 2 from Oregon. The attacks were distributed in the following months; July (2), August (2), September (1) and October (2). From 2000 to the present, of 56 total reported shark attacks, 28 (50%), occurred during the months August (10), September (8), or October (10). If we use the Southern Santa Barbara County line as a division between Southern and Central California, 1 of the reported attacks occurred in Southern California with the remaining 4 north of the division line. Both Oregon shark attack locations were about midway between the California and Washington borders at Winchester Bay and the Siuslaw River. Activities of the victims were; 3 Surfing, 2 Kayaking, 1 Paddle-Boarder, and 1 Boogie Boarder (fatal). The Great White Shark, Carcharodon carcharias, was positively identified or highly suspect in all 7 of the attacks.

The publication “Shark Attacks of the Twentieth Century” authenticated 108 unprovoked shark attacks from the Pacific Coast between 1900 and 1999. The Great White Shark was implicated in 94 (87%) of the 108 confirmed attacks with an annual average of slightly more than one shark attack per year. The 7 cases reported for 2010 brings the total number of unprovoked shark attacks occurring along the West Coast during the first decade of the 21 st Century to 56. This is ‘more than five times' the Twentieth Century annual average and represents 52% of the total number of attacks reported for the entire Twentieth Century. The Great White Shark has been implicated in 48 (86%) of the 56 attacks reported during this Century. There have been 164 authenticated unprovoked shark attacks reported from the Pacific Coast of North America since 1900. The Great White Shark was positively identified or highly suspect in 142 (87%) of the 164 reported cases.

Victim activity for the 56 unprovoked shark attacks reported from the Pacific Coast since 2000 are distributed in the following groups; surfers 38 (68%) of the documented attacks with 5 swimmers (9%), 5 kayakers (9%), 3 divers (5%), 3 paddle boarders (5%), and 1 boogie boarder (2%). The number of adult, sub-adult, and juvenile Great White Sharks observed in Southern California during 2010 seems to support the contention that there is a possible change in their population dynamics and seasonal site preferences. The number of stranded marine mammal carcasses reported, specifically their location and time of year, would seem to support this observation. The Shark Research Committee will continue to closely monitor this activity. Please report any shark sighting, encounter, or attack to the Shark Research Committee.

Manhattan Beach — On February 7, 2011 Jason Lee was surfing 100 yards from shore in front of 34th Street in Manhattan Beach. It was 3:30 PM and he had been on the water about one hour. The sky was clear with the air temperature estimated at 80 degrees Fahrenheit. There were ‘consistent barrels coming in.' No marine mammals were observed in the area. Lee reported; “I was out surfing, waiting in a zone right before the wave crests and breaks. While I was waiting, I looked down and noticed something move. I wasn't sure it was a shark until I noticed the two side fins sticking out from the body and saw its body move in side-to-side motion while swimming. The shark swam below, past my board, and continued on its way. I paddled immediately back to shore, left the beach. The shark was 4 – 5 feet long, skinny build, dark color, possibly brown, but it may have been due to the water clarity. The nose was pointy but not sharp.” Please report any shark sighting, encounter, or attack to the Shark Research Committee.

Cardiff — On January 30, 2011 Casey Anderson and two unidentified friends were surfing near the San Elijo Campground, at Cardiff-by-the-Sea , usually referred to as Cardiff , located between Encinitas and Solana Beach in San Diego County. It was 10:30 AM and they had been on the water about 15 minutes. It was partly cloudy with a steady breeze from the South, and slightly offshore, with an estimated air temperature of 65 degrees Fahrenheit. There was a slight texture to the sea surface, with a light swell from Southwest and wave face heights waist to shoulder high. The water was 8 – 9 feet deep over a sandy ocean bottom with scattered areas of rocks and kelp grass and an estimated temperature of 58 degrees Fahrenheit. A single sea lion was observed following a fishing boat that was retrieving crab pots 130 yards out from their location. Anderson reported; “I caught a wave and rode it South toward shore into waist deep water. I pulled out of the wave and got back on my board and paddled back out. I lay prone on my surfboard about 30 feet farther out than my two friends. I was facing West, looking for the next wave set. A small roller came through, too small to try to catch. In the trough in front of the wave, about 20 feet out from my position, I saw a triangular fin rise from the water. I noted that it did not surface in a curving motion like I see when dolphins surface. I would estimate the height of the fin that I saw to be 16 inches with a charcoal color leading edge fading to steel grey on the trailing edge of the dorsal fin. It came straight through the water swimming South to North and angled toward shore. The fin submerged when the small roller wave overtook it. I immediately raised my feet from the water and paddled with deliberate calm toward shore and toward my two friends who were about 10 yards behind me. They had not seen the fin. I told them what I saw and we decided to continue surfing accepting that whether we knew it or not we'd likely surfed with sharks near before. After another 40 minutes of surfing and not seeing the fin again, we exited the water and climbed stairs to the top of the bluffs backing the beach. The wife of one of my friends had been watching us surf from the bluff top and she immediately asked us if we'd seen a fin come up near us. She'd seen it surface from where she'd stood approximately 100 yards behind and 40 feet above us.” Please report any shark sighting, encounter, or attack to the Shark Research Committee.

Huntington Beach — On January 22, 2011 Kevin White and Scott Cross were surfing at Huntington Beach near Tower 10 on the North side of the pier. It was 4:30 PM and they had been on the water 2 hours. The sky was clear with an estimated air temperature in the upper 60s Fahrenheit. The ocean was choppy with a 6 foot swell and an estimated water temperature in the upper 50s Fahrenheit and 3 feet of water visibility. No marine mammals were observed in the area. White reported;“We were sitting in the lineup with two other surfers, no one else was in the water. It was low tide and the waves where breaking about 300 yards out. About 60 yards in front of us we saw a ‘grayish colored' 2 1/2 foot high, maybe bigger, triangular shaped dorsal fin. The tail was also visible and 5 – 6 feet behind the dorsal fin. It was cursing South toward Newport real slow. It stayed there for about 40 seconds then we saw the tail push it forward and it disappeared. Scott and I exited the water after the next waves we caught and did not see it after that. I would say it was about 15 feet in length, maybe bigger. It was hard to tell with the sun in my eyes but that dorsal fin was huge.” Please report any shark sighting, encounter, or attack to the Shark Research Committee.

San Onofre State Beach — On January 17, 2011 Miguel Perez, and his son Kyle, were surfing at Trail 1, San Onofre State Beach. It was 12:00 PM and they had been on the water about 30 minutes. The sky was clear with no noticeable wind and an air temperature of 75 – 80 degrees Fahrenheit. There were 2 – 3 foot waves and a green water condition with an estimated temperature in the upper 50s Fahrenheit. There were no marine mammals observed in the area. Miguel reported;“My son and I paddle out and sat on our boards waiting for waves. My son was 10 – 15 feet further out than my location when the fin surfaced about 15 feet further than my son. The shark was heading in our direction when my son said ‘is that a shark?' I said, ‘yes', then a small wave, that we would not have be able to catch because we were too far out, rolled by causing the shark to turn and then submerged. The shark was black in color, about 7 feet in length. The dorsal fin was raised 4 – 6 inches above the surface of the water. The rest of the shark was visible below the surface. We surfed for another two hours and did not see the shark again.” Please report any shark sighting, encounter, or attack to the Shark Research Committee.

Pismo Beach — On January 7, 2011 a juvenile Salmon Shark, Lamna ditropis, washed ashore at the North end of Pismo Beach. There were no signs of trauma on the animal and the cause of death is unknown. A California Department of Fish and Game biologist identified the animal as a salmon shark, so named because it likes to eat salmon, as well as other kinds of fish. (Photo by Joe Johnston)

Washington, DC — On January 4, 2011, H. R. 81 – THE SHARK CONSERVATION ACT OF 2009 – was signed into law by the President. Madeleine Bordallo, the Chair of the Insular Affairs Oceans and Wildlife subcommittee, and one of the original sponsors of the bill, worked tirelessly for passage of this legislation. The bill was introduced on January 6, 2009. It passed by voice vote the House of Representatives on March 2, 2009 and was then given to the Senate on March 3, 2009. The following Action Report shows activity by the Congress during the 356 days between introduction and passage. The effectiveness of this legislation will be tested over the next decade. Strict enforcement might reduce some of the pressure on dozens of shark species that are currently on the Endangered and Threatened Species lists of numerous organizations. Only time will tell. Please do your part to help – ‘Save the Sharks – Save the Oceans.'


http://www.youtube.com/user/wizardofbaum#p/u/1/aOln_2UWjpk
Posted by Unknown at 2:17 PM

Did any sharks get bit?

Omg I am scared of going in the water I love the ocean but that means doughnut of your eggs and the lic of my private plants are floating in the sky wow that was akward!!