IBMs WATSON ENDS IN A TIE ON JEOPARDY IN ROUND ONE..WATSON ROUTS HUMANS IN ROUND TWO 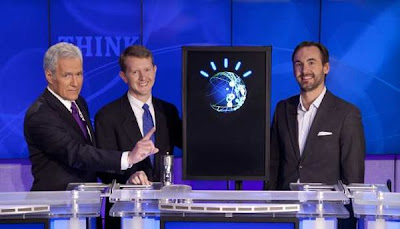 IBM's Watson on Jeopardy: Round 1 ends in a tie


IBM's Watson landed a tie in the first round of Jeopardy's man-vs.-machine challenge Monday night.

Watson, IBM's supercomputer, and Brad Rutter each ended Day 1 with $5,000 in winnings, while Ken Jennings, the other human competitor, came out with $2,000.

Jennings -- who had previously won 74 consecutive Jeopardy matches -- defeated Watson in the practice match between the three players leading up to the three-round faceoff.

Round 2 is Tuesday night, and the final round airs Wednesday.

While Watson proved competitive, there were some missteps.

At one point during on Monday's episode, Watson gave a wrong answer, saying "What is 1920s,” after Jennings had just given the same incorrect response.

Host Alex Trebek responded with "No, Ken already said that."

Watson, named after IBM founder Thomas J. Watson, started off Monday's episode in dominating fashion with $5,200 on the board by the first commercial break, while Rutter accumulated $1,000 and Jennings rung up $200.

The first night was a huge learning experience for the engineers who've spent years working on building Watson for this very match, said Steve Canepa, IBM's general manager of global Media and the entertainment industry.

"I've seen a lot of the the videos we've put together about the making of Watson and things like that, but I hadn't actually seen it in action until tonight," Canepa said Monday after the first night of competition.

"When Watson repeated that answer, to the general public it was probably pretty funny. But Watson only takes his input from the question board so the fact that somebody else gave the same answer already doesn't factor to into Watson says. He can't hear what the other players are saying, but maybe that's a feature we can add in the future."

Offering the same response as Jennings also shows just how smart Watson is, he said.

"There is obviously some form of logic that was very similar to that of the human player tackling that problem, and that is fascinating to me," Canepa said. "The ability to sort through what is a couple hundred million pages of information in a very short amount of time, all the data that we create in blogs and tweets and articles and all of that unstructured text on the Internet -- to be able to find the relationship between words so quickly is what the point of all this is."

All the data stored in Watson is acquired from the Internet, as well as books and journals, though for competition, Watson is disconnected from the Web, he said.

IBM is looking to change the way computers, and people, search and learn using computers, Canepa said, and Watson is searching information as humans create it, not just by data put into rows and columns as has been done before.

"We'll see what happens over the next two nights, but I'm not overly focused on the win or loss myself," he said. "In Chess, as finite as it is, there's a finite number of moves. But in this there are an infinite number of questions that can be asked and with all the puns and ways there are to ask a question.


Watson opened night two absolutely crushing his human competition, opening the scoring and not looking back for several straight minutes. Watson wagered some $6,000 and change in the first Daily Double—he got it!

The first few minutes were simply outstanding for those of us cheering for Watson. And how weird it was to see humans in the audience cheering on the A.I.

Our only hope is that Watson doesn’t rebel against his masters and cause a bit of havoc à la Shodan (not that I’m altogether opposed to a robot takeover, mind you).

WATSON TRIUMPHS,,,NEW CHAMPION
Jeopardy!" has a new champion, and its name is Watson. During the Wednesday finale of the three-day "Jeopardy!" challenge that pitted all-stars Ken Jennings and Brad Rutter against an IBM-engineered supercomputer, the machine ultimately beat the men. Watson finished with $77,147, with Jennings coming in second with $24,000 and Brad Rutter last with $21,600.


The win is a publicity coup for IBM, which created Watson as part of its Great Mind Challenge series. The company hopes to sell Watson’s question-answering technology for use in hospitals and call center help desks. The last time IBM created a man-versus-machine challenge of this scale, it built Deep Blue, the chess-playing supercomputer that beat champ Garry Kasparov.

Watson had a huge advantage going into the final match, with a lead of more than $20,000 over Rutter, then in second place. Though it missed a Daily Double answer regarding "The Elements of Style," it showed its versatility later, buzzing in correctly on everything from "The Simpsons" to halter tops.

Watson also won Wednesday night’s Final Jeopardy round, offering the correct answer to a clue asking which author's most famous novel was inspired by William Wilkinson's "An Account of the Principalities of Wallachia and Moldavia." Watson, Jennings and Rutter all knew the answer was Bram Stoker.

Ken Jennings, ever a good sport, bowed to the new "Jeopardy!" champ. “I for one welcome our new computer overlords,” he wrote on his video screen, quoting an episode of “The Simpsons."
Posted by Unknown at 5:36 AM