Frank Buckles, one of more than 4 million Americans to serve in World War I, drove ambulances in France and was later a civilian prisoner of war during Japan's invasion of the Philippines in WWII.

Frank Buckles is honored by members of Congress and veterans in June 2008 on Capitol Hill. (Karen Bleier, AFP/Getty Images) 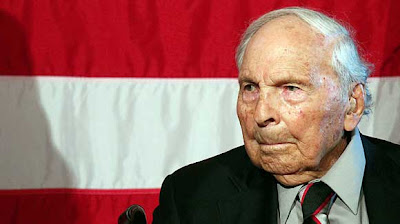 Frank Woodruff Buckles, a onetime Missouri farm boy who was the last known living American veteran of World War I, has died. He was 110.

Buckles, who later spent more than three years in a Japanese POW camp as a civilian in the Philippines during World War II, died Sunday of natural causes at his home in Charles Town, W.Va., family spokesman David DeJonge said.

"I always knew I'd be one of the last because I was one of the youngest when I joined," Buckles, then 107, told the New York Daily News. "But I never thought I'd be the last one."

Earning that distinction resulted in numerous honors for Buckles in 2008.

In March 2008, he met with President George W. Bush at the White House, then attended the unveiling of an exhibit at the Pentagon of recent photographic portraits of nine World War I veterans, including himself, who had lived to age 100 or older.

In April, then-West Virginia Gov. Joe Manchin formally dedicated a section of the new four-lane state Route 9 in honor of Buckles, who lived with his daughter, Susannah Flanagan, and her husband on a cattle farm near Charles Town, a small community in West Virginia's eastern panhandle.

And on Nov. 11 — the 90th anniversary of the signing of the armistice — Buckles was recognized by the secretary of the Department of Veterans Affairs as "our last living link" to World War I.

He was born Feb. 1, 1901, on a farm near Bethany, Mo., and moved with his family to a farm in Oklahoma's Dewey County as a teenager.

When the United States entered the war in April 1917, Buckles was eager to enlist — even though he was only 16.

After being rejected by Marine and Navy recruiters, Buckles tried the Army. When the recruiter asked to see his birth certificate, Buckles said Missouri didn't keep birth records when he was born and the only record was what was written in the family Bible.

His word was good enough for the Army.

"I was a snappy soldier," he told USA Today in 2007 while looking at a sepia-toned photo of himself in his uniform. "All gung-ho."

In his Daily News interview, Buckles recalled that an old sergeant told him, "If you want to get to France in a hurry, then join the ambulance service."

He shipped off to England in December 1917 on the RMS Carpathia, the ocean liner that had rescued survivors of the Titanic in 1912.

Initially stationed in England, where he drove dignitaries around, he successfully hounded his officers for an assignment in France. He never got close to the action. But, as he told columnist George F. Will in 2008, "I saw the results."

When the war ended, Buckles remained in Europe to help escort prisoners of war back to Germany.


After returning home a corporal, he attended a business school in Oklahoma City for several months and, among other jobs, worked for a bank. But he grew bored.


Satisfying a desire for adventure, he got a job with the White Star Line shipping company and traveled the world. He was in Manila when the Japanese attacked the Philippines on Dec. 8, 1941, and was among the Western civilians later taken prisoner.

Buckles spent about 3 1/2 years at the Santo Tomas and Los Banos internment camps. At Los Banos, he said in a 2009 interview with the Philadelphia Inquirer, he once saw three prisoners nearly beaten to death.

"There was no mercy as far as the Japanese were concerned," he said.

Buckles, who led daily fitness classes in the camp, said food became scarce as Japan began losing the war. He had gone in weighing 140 pounds and had lost more than 50 pounds by the time the camp was liberated in February 1945.

After returning home, Buckles married Audrey Mayo, whom he had met in California before the war. In 1954, they moved to the 330-acre West Virginia cattle farm.

"I had been bouncing around from one place to another for years at sea," Buckles told the Charleston Daily Mail in 2007. "It was time to settle down in one place."

He continued to live on his farm and reportedly drove a car and a farm tractor until he was 102.

Just before his 108th birthday in 2009, Buckles told the Philadelphia Inquirer that he always knew he'd live a long life: His father died at 97, a sister at 104. And other relatives on his mother's side of the family hit the century mark.

As for living long enough to be the last U.S. military veteran of World War I, he grinned and said, "If it has to be somebody, it might as well be me."

He is survived by his daughter, Susannah Buckles Flanagan.
Posted by Unknown at 12:21 PM