MILA KUNIS TO BE WICKED WITCH IN WIZARD OF OZ PREQUEL 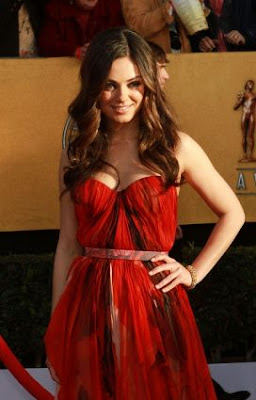 Actress Mila Kunis has been cast in the Wizard of Oz Prequel! Rumored to be playing the Wicked Witch, it looks like its official now that the Black Swan star has been in talks with Director Sam Raimi. Get the details here and see videos and photos of Mila Kunis below the fold.

Worstpreviews.Com is reporting that Mila Kunis of that 70’s Show fame will be playing the green faced Wicked Witch in the upcoming Wizard of Oz Prequel being directed by Sam Raimi. You know – the one that mostly likely gave you nightmares when you were a kid!

The Disney production, that could be filming in Michigan with a $105 million dollar budget, has nabbed Kunis to play the role of Theodorah (who becomes the wicked witch) in the prequel, which has the working title of ‘Oz, The Great And Powerful.’ Director Raimi’s Oz remake also includes actor James Franco in the role of an illusionist, who finds himself in the land of the lollipop kids, replacing the previously cast Robert Downey Jr..

Previously the twenty-eight year old performer was rumored to be part of the live action remake of Akira from director Albert Hughes but has since turned down a spot in the film. The actress has really stepped up her A game since becoming a big screen performer. First beginning her career in TV land, Kunis has moved on from her break out role as Jackie to appear in Date Night, Black Swan, and The Book of Eli. She is also on board the movie Ted and Friends With Benefits in the role of Jamie.

Mila Kunis will begin shooting on the set of the Wizard of Oz Prequel this coming July. Tell us what you think about Mila joining the Raimi production as the Wicked Witch below!
Posted by Unknown at 7:38 AM

can't wait to see her in the film with james franco. They'd make a great looking couple. The movie is suppose to be smart and sophisticated. Hope that's the case. She's stunning. Hope they allow her to look that way.