The men filed in slowly, one wearing a vintage green uniform emblazoned with a Purple Heart. Another rolled in on a chair, his head held high with a Veterans of Foreign Wars hat laden with medals. Some had lost frozen fingers, others toes. All had left behind friends 66 years ago in one of the biggest and bloodiest battles of World War II. 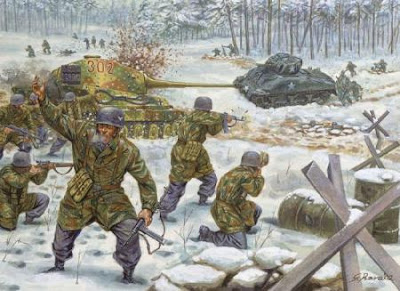 These men are the last of a kind, the surviving veterans of the Battle of the Bulge.

"Soldiers who fought in the Battle of the Bulge led the free world to victory," said Geert Criel, Belgium's consul general in Los Angeles, who hosted 50 members of the Veterans of the Battle of the Bulge on Saturday. "On behalf of my country, I would like to thank every veteran who made a contribution to this historic achievement. For us you are more than soldiers. You are heroes."

The Battle of the Bulge, Criel said, is emblazoned on memorials, in the names of city streets and in his country's collective memory. It was a turning point in the war that crushed Hitler's last-ditch effort to retake Belgium from the advancing U.S. and British armies in the Ardennes region. "We shudder to think: What if Hitler had succeeded," he said. "It would have prolonged the war and meant misery and death for a lot of people."

THE BATTLE OF THE BULGE VIDEO,,,


"Many of us made sacrifices," said Gordon Hearne, president of the Southern California chapter of the veterans group. "Nineteen thousand of us didn't return." His voice cracked; his eyes drifted to a distant memory. He paused, held a fist up to his mouth before continuing. "We should remember them."

It was a poignant moment during an otherwise light-hearted event — a place to swap war stories, compare medals and share a common bond of an epic five-week battle involving frigid temperatures and 840,000 GIs. Most exercised the self-deprecating humor of a bygone era. To hear them tell it, they were all accidental heroes.

"I'm surprised they gave me a Purple Heart, given all of the trouble I gave them," said Dave Lester, 92, of Costa Mesa. "The Germans threw a lot of hand grenades at us; we couldn't throw them all back."

Prodded by friends, Howenstein recounted how Gen. George S. Patton pinned him with a Purple Heart after an artillery shell left him with shrapnel in his neck. "Get well and get back to the front," Howenstein recalled the general saying.

Howenstein said the medals and the uniform have brought an unanticipated bonus when he has returned to France for commemorative events. "I put on this uniform and the girls come up to me and hug me and kiss me," he said.

Only half the members could make it to the lunch, because of troubles getting around. Murray Shapiro, 87, of Chatsworth had helped organize the event and was disappointed he had to skip it because of upcoming knee replacement surgery. 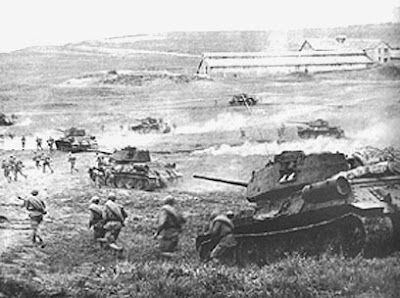 
Battle of the Bulge

The Battle of the Bulge (also known as the Ardennes Offensive and the Von Rundstedt Offensive) (16 December 1944 – 25 January 1945) was a major German offensive (die Ardennenoffensive), launched toward the end of World War II through the densely forested Ardennes Mountains region of Wallonia in Belgium, hence its French name (Bataille des Ardennes), and France and Luxembourg on the Western Front. The Wehrmacht's code name for the offensive was Unternehmen Wacht am Rhein ("Operation Watch on the Rhine"), after the German patriotic hymn Die Wacht am Rhein. This German offensive was officially named the Ardennes-Alsace campaign[3] by the U.S. Army,[16] but it is known to the English-speaking general public simply as the Battle of the Bulge, the "bulge" being the initial incursion the Germans put into the Allies' line of advance, as seen in maps presented in contemporary newspapers.

The German offensive was supported by several subordinate operations known as Unternehmen Bodenplatte, Greif, and Währung. Germany's goal for these operations was to split the British and American Allied line in half, capturing Antwerp, Belgium, and then proceed to encircle and destroy four Allied armies, forcing the Western Allies to negotiate a peace treaty in the Axis Powers' favor.[17] Once accomplished, Hitler could return his attention and the bulk of his forces to the Soviet armies in the east.

The offensive was planned with the utmost secrecy, minimizing radio traffic and moving troops and equipment under cover of darkness. Although ULTRA suggested a possible attack and the Third U.S. Army's intelligence staff predicted a major German offensive, the Allies were still caught by surprise. This was achieved by a combination of Allied overconfidence, preoccupation with their own offensive plans, and poor aerial reconnaissance.

Near-complete surprise against a weakly defended section of the Allied line was achieved during heavy overcast weather, which grounded the Allies' overwhelmingly superior air forces. Fierce resistance, particularly around the key town of Bastogne, and terrain favoring the defenders threw the German timetable behind schedule. Allied reinforcements, including General George Patton's Third Army, and improving weather conditions, which permitted air attacks on German forces and supply lines, sealed the failure of the offensive.

In the wake of the defeat, many experienced German units were left severely depleted of men and equipment as survivors retreated to the defenses of the Siegfried Line. For the Americans, with about 500,000 to 840,000 men[1] committed and some 70,000 to 89,000 casualties, including 19,000 killed,[7][10] the Battle of the Bulge was the largest and bloodiest battle that they fought in World War II
Posted by Unknown at 1:45 PM

Moving post, thank you for taking the time to compile these memories - it's critical we never forget.