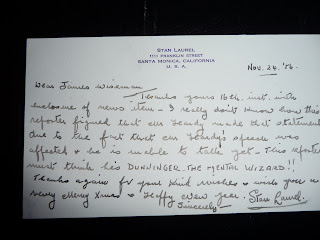 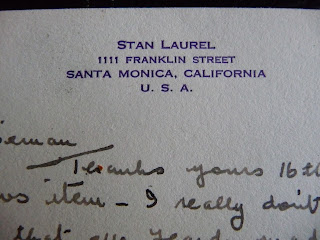 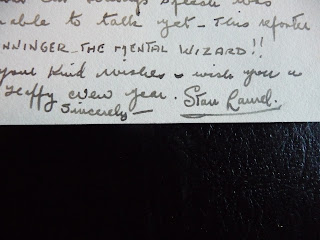 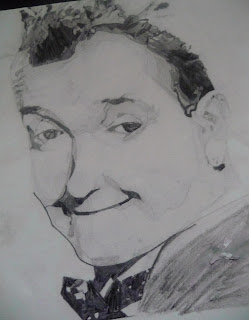 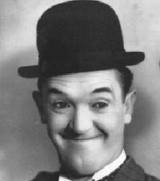 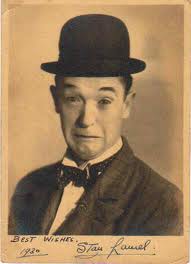 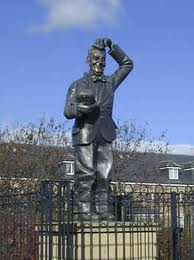 Arthur Stanley Jefferson (16 June 1890 – 23 February 1965), better known as Stan Laurel, was an English comic actor, writer and film director, famous as the first half of the comedy double-act Laurel and Hardy.[1] His career stretched from the silent films of the early 20th century until after World War II. 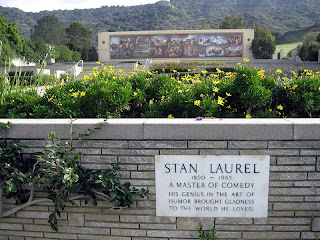 6 Life after Laurel and Hardy

Stan Laurel was born in his grandparents' house on 16 June 1890 at 3 Argyle Street, Ulverston[2] in the Furness region of Lancashire, England (now part of the ceremonial county of Cumbria).

His parents, Arthur and Madge (Margaret) Jefferson, were both active in the theatre and always very busy. But Stan's home life in Bishop Auckland, County Durham was still a happy one. In his early years, he spent much time living with his grandmother Sarah Metcalfe. He attended school at the King James I Grammar School, Bishop Auckland[3] and The King's School, Tynemouth, for a while he attended Rutherglen Academy.[4] His father managed a number of different theatres – one of which being the long demolished Eden Theatre in Bishop Auckland. Stan had a natural affinity for the theatre, with his first professional performance on stage being at the Britannia Panopticon in Glasgow, Scotland, at the age of 16.[5]

In 1910, he joined Fred Karno's troupe of actors, which also included a young Charlie Chaplin. For some time, Stan acted as Chaplin's understudy. The Karno troupe toured America, and brought both Chaplin and Laurel to the United States for the first time. From 1916 to 1918, he teamed up with Alice and Baldwin Cooke, who became lifelong friends. Amongst other performers, Laurel worked briefly alongside Oliver Hardy in a silent film short The Lucky Dog. This was before the two became a team.[2]

Short clip of Mud and Sand parodyIt was around this time that Stan met Mae Dahlberg, who was to have a great effect on his life. Also about this time, Stan adopted the stage name of Laurel, at Dahlberg's suggestion. The pair were performing together when Laurel was offered $75.00 per week to star in two-reel comedies. After the making of his first film, Nuts in May, Universal offered him a contract. The contract was soon cancelled, however, during a reorganisation at the studio. Among the films Dahlberg and Laurel appeared in together was the 1922 parody, Mud and Sand, of which a short clip can be seen at the left.

By 1924, Laurel had forsaken the stage for full-time film work, now under contract with Joe Rock for twelve two-reel comedies. The contract also had one unusual stipulation, that Dahlberg was not to appear in any of the films. It was felt that her temperament was hindering his career. In 1925, when she started interfering with Laurel's work, Rock offered her a cash settlement and a one-way ticket back to her native Australia, which she accepted. In 1926, Stan married his first wife, Lois Nielson. He would go on to marry three more times, but one of his wives he would marry twice (Clara).[6] In May 1930, his second child Stanley Robert Laurel died at age of nine days.[7]

He was also good friends with Jimmy Finlayson before the team of Laurel and Hardy appeared.

Laurel went on to join the Hal Roach studio, and began directing films, including a 1926 production called Yes, Yes, Nanette. He intended to work primarily as a writer and director, but fate stepped in. In 1927, Oliver Hardy, another member of the Hal Roach Studios Comedy All Star players, was injured in a kitchen mishap and Laurel was asked to return to acting. Laurel and Hardy began sharing the screen in Slipping Wives, Duck Soup and With Love and Hisses. The two became friends and their comic chemistry soon became obvious. Roach Studios' supervising director Leo McCarey noticed the audience reaction to them and began teaming them, leading to the creation of the Laurel and Hardy series later that year.

Together, the two men began producing a huge body of short films, including The Battle of the Century, Should Married Men Go Home?, Two Tars, Be Big!, Big Business, and many others. Laurel and Hardy successfully made the transition to talking films with the short Unaccustomed As We Are in 1929. They also appeared in their first feature in one of the revue sequences of The Hollywood Revue of 1929 and the following year they appeared as the comic relief in a lavish all-colour (in Technicolor) musical feature, The Rogue Song. In 1931, their own first starring feature, Pardon Us was released, although they continued to make both features and shorts until 1935, including their 1932 three-reeler The Music Box which won an Academy Award for Best Short Subject.

During the 1930s, Laurel was involved in a dispute with Hal Roach and ended up having his contract terminated. After being tried for drunk driving, he counter-sued the Roach studio. Eventually, the case was dropped and Laurel returned to Roach. Meanwhile, Laurel had divorced his first wife and married Virginia Ruth Rogers in 1935, whom he divorced to marry his third wife Vera Ivanova Shuvalova ("Illeana") in 1938. By 1941, he had once again married Virginia Ruth Rogers.

After returning to Roach studios, the first film Laurel and Hardy made was A Chump at Oxford. Subsequently, they made Saps at Sea, which was their last film for Roach. In April 1940, their contract expired. Roach decided to make a film without Stan Laurel, but with Oliver Hardy and Harry Langdon, Zenobia.

During the start of Laurel and Hardy's partnership, Stan had a baby girl with Lois (his first wife), born in 1928, and named the baby after his wife, Lois. Stan and his daughter Lois had a very strong relationship. Stan would take Lois onto the sets and try to see her as much as he could, even when he divorced her mother.

In 1939, Laurel and Hardy signed a contract at 20th Century Fox to make one motion picture and nine more over the following five months. During the war years, their work became more standardised and less successful though The Bullfighters, Great Guns and A-Haunting We Will Go did receive some praise. Laurel discovered he had diabetes, so he encouraged Oliver Hardy to make two films without him. In 1946, he divorced Virginia Ruth Rogers and married Ida Kitaeva Raphael. With Ida, he enjoyed a happy marriage until his death.

In 1950, Laurel and Hardy were invited to France to make a feature film. The film, a French/Italian co-production titled Atoll K, was a disaster. (The film was titled Utopia in the US and Robinson Crusoeland in the UK.) Both stars were noticeably ill during the filming. Upon returning home, they spent most of their time recovering. In 1952, Laurel and Hardy toured Europe successfully, and they toured Europe again in 1953.

During this tour, Laurel fell ill and was unable to perform for several weeks. In May 1954, Oliver Hardy had a heart attack and canceled the tour. In 1955, they were planning to do a television series, Laurel and Hardy's Fabulous Fables, based on children's stories, but the plans were delayed after Laurel suffered a stroke. He recovered, and as he was planning to get back to work, Oliver Hardy had a massive stroke on 15 September 1956. Paralyzed and bedridden for several months, he was unable to speak or move.

On 7 August 1957, Oliver Hardy died. Laurel did not attend his funeral, stating "Babe would understand." Afterwards, Laurel decided he would never act again without his long-time friend, but he did write gags and sketches for fellow comedians. People who knew Laurel said he was absolutely devastated by Hardy's death and never fully recovered, as the two comedians were very close friends.

Life after Laurel and Hardy

Stan Laurel's grave at Forest Lawn. The Birth of Liberty mosaic is visible in the background.In 1961, Laurel was given a Lifetime Achievement Academy Award for his pioneering work in comedy. He had achieved his lifelong dream as a comedian and had been involved in nearly 190 films. He lived his final years in a small apartment in the Oceana Hotel in Santa Monica. Always gracious to fans, he spent much time answering fan mail. His phone number was listed in the telephone directory, and fans were amazed that they could dial the number and speak to Stan Laurel. Jerry Lewis was among the comedians to visit Laurel, who offered suggestions for Lewis' production of The Bellboy (1960). Lewis had even paid tribute to Laurel by naming his main character Stanley in the film, and having Bill Richmond play a version of Laurel as well.

Laurel was a heavy smoker until suddenly giving up when he was about seventy years of age. He died on 23 February 1965, several days after suffering a heart attack.[8] Just minutes away from death, Laurel told his nurse he would not mind going skiing right at that very moment. Somewhat taken aback, the nurse replied that she was not aware that he was a skier. "I'm not," said Laurel, "I'd rather be doing that than have all these needles stuck into me!" A few minutes later the nurse looked in on him again and found that he quietly had died.

Dick Van Dyke, a friend, protege and occasional impressionist of Laurel's during his later years, gave the eulogy at his funeral. Silent screen comedian Buster Keaton was overheard at Laurel's funeral giving his assessment of the comedian's considerable talents: "Chaplin wasn't the funniest, I wasn't the funniest, this man was the funniest."

In 1989, a statue of Laurel was erected in Dockwray Square, North Shields, Northumberland, England where he lived at No. 8 from 1897 to 1902, and where the steps down from the Square to the North Shields Fish Quay were said to have inspired the piano-moving scene in The Music Box. In 2006, BBC Four showed a drama called Stan, based on Laurel meeting Hardy on his deathbed and reminiscing about their career.[9]

Laurel's star on the Hollywood Walk of Fame is situated at 7021 Hollywood Blvd, Los Angeles, California.

In 2008, a statue of Stan Laurel was unveiled in Bishop Auckland, County Durham, on the site of the Eden Theatre.[10]

In April 2009, a bronze statue of Laurel and Hardy was unveiled in Ulverston, Cumbria.[11]

LAUREL AND HARDY DANCING TO TINA TURNER,,ROLLING ON THE RIVER


THIS IS YOUR LIFE
http://www.youtube.com/watch?v=tdgegW5Xmp0

http://www.youtube.com/watch?v=0yoPb-amgbs&feature=related
Posted by Unknown at 10:25 AM