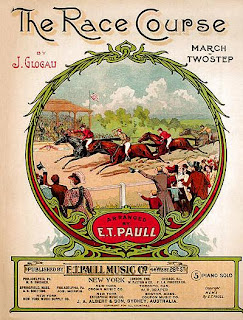 Jack Glogau, arr. by Edward Taylor Paull - 1910: The excitement of a day at the downs is readily captured in this two step. Actually, horse racing was a very respectable society event when this was written. One of the most popular places on New York's Coney Island was showman George Tilyou's Steeplechase Park. The most famous attraction and centerpiece of the large park was a mile long mechanical steeplechase ride utilizing wooden horses on a circular undulating track. This was one way in which the masses could participate in some way in a sport of the elite. Thus the Paull catalog was successfully capitalizing on yet another American fascination
Posted by Unknown at 6:21 AM