DOPAMINE..ONE OF THE BRAINS MOST POWERFUL STIMULANTS 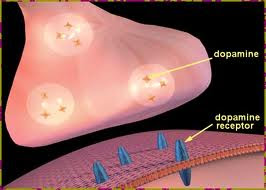 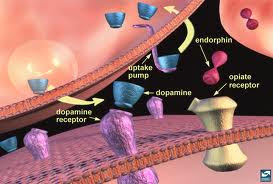 We are coming to some understanding of the drive to love--and what an elegant design it is! This passion emanates from the motor of the mind, the caudate nucleus, and it is fueled by at least one of nature's most powerful stimulants, dopamine. When passion is returned, the brain tacks on positive emotions, such as elation and hope. And all the while, regions of the prefrontal cortex monitor the pursuit--planning tactics, calculating gains and losses, and registering one's progress toward the goal: emotional, physical, even spiritual union with the beloved. Nature has produced a powerful mechanism to focus our precious courtship energy on a special other--an evolutionary miracle designed to produce more humans.

"The brain is wider than the sky," wrote Emily Dickinson. Indeed, this 3-lb. blob can generate a need so intense that all the world has sung of it. And to make our lives even more complex, romantic passion is intricately enmeshed with two other basic mating drives, the sex drive and the urge to build a deep attachment to a romantic partner. Ah, the web of love. How these forces feed the flame of life.


Dopamine has many functions in the brain, including important roles in behavior and cognition, voluntary movement, motivation, punishment and reward, inhibition of prolactin production (involved in lactation and sexual gratification), sleep, mood, attention, working memory, and learning. Dopaminergic neurons (i.e., neurons whose primary neurotransmitter is dopamine) are present chiefly in the ventral tegmental area (VTA) of the midbrain, the substantia nigra pars compacta, and the arcuate nucleus of the hypothalamus.

It has been hypothesized that dopamine transmits reward prediction error, although this has been questioned.[6] According to this hypothesis, the phasic responses of dopamine neurons are observed when an unexpected reward is presented. These responses transfer to the onset of a conditioned stimulus after repeated pairings with the reward. Further, dopamine neurons are depressed when the expected reward is omitted. Thus, dopamine neurons seem to encode the prediction error of rewarding outcomes. In nature, we learn to repeat behaviors that lead to maximizing rewards. Dopamine is therefore believed to provide a teaching signal to parts of the brain responsible for acquiring new behavior. Temporal difference learning provides a computational model describing how the prediction error of dopamine neurons is used as a teaching signal.

The reward system in insects uses octopamine, which is the presumed arthropod homolog of norepinephrine,[7] rather than dopamine. In insects, dopamine acts instead as a punishment signal and is necessary to form aversive memories.[8][9]
Posted by Unknown at 8:47 AM