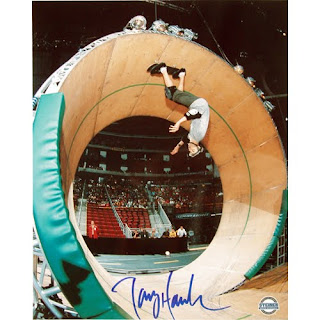 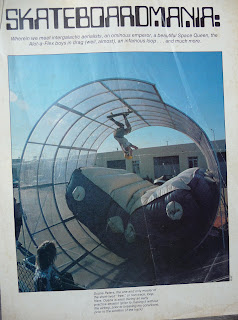 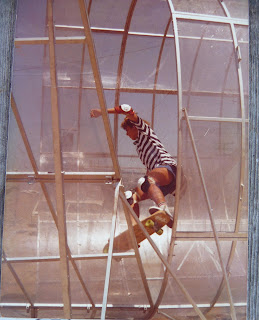 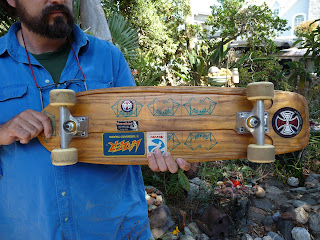 Photographer Mark Kirchner of Newport Beach, California, was an avid skateboarder and part of the first wave of pool riders in the mid 1970s.
During this time period Mark (pictures # 3-4) worked for the Rad Ramp Company that created skateboard ramps using plexi-glass as the riding surface. In 1978 Rad Ramp was commissioned to design and manufacture the worlds first skateboard loop for a Hollywood stage and laser-lights show. The design process included the help of physicist and engineers to create the loop. Mark Kirchner made the detailed mechanical drawings in case a second loop would be needed in the future. The first person to complete the “Death Loop” was Rad Ramp team member Duane Peters. The project was featured in Skateboarder Magazine (picture #2) in 1978, but the Death Loop never made its debut in Hollywood. Many things factored into its demise, including finding riders, funding and the closing of skateboard parks due to liability issues. One reason for sharing this information on the blog is to draw attention to the differences between the original “Death Loop” (picture #2) and Tony Hawk’s “Loop of Death” (picture #1). If you look at the two loops and make a visual comparison you will see the original loop has a larger diameter (14 feet) barrel. It is has a square steel tubing frame holding the plexi-glass panels. This construction created a loop the flexed, and became elliptical when the riders force interacted with the barrel of the loop. Now if you make a comparison with the Hawk loop you will see that it is a smaller diameter, and highly engineered outer frame is the more solid of the two loops.

Tony Hawk on learning to perform the Loop of Death. "I was inspired by Hot Wheels as a kid and then I saw a guy attempt a full loop on a skateboard around the time I started skating. I finally got the chance to build one in 1995 and it took a while to figure it out. I didn't make it successfully until we built a proper one in 1997. In 2003 we incorporated it into our Boom Boom HuckJam tour. We made it every night for 30 shows and have since retired the "Loop of Death."

One final thought on the original “Death Loop”. Both of the loops need courageous and skilled skaters to even attempt the loops. Imagine standing 30 feet up on the clear plexi-glass Rad Ramp take-off ramp looking down at the “Death Loop”. The loop barrel is clear; you are seeing threw it to the ground below. Now imagine it in the context of the stage show with no “house lights”, pitch black with just spotlight and lasers. While Duane Peters and others successfully rode the loop in daylight, the loop in darkness became even more dangerous and probably beyond any riders skill.
Posted by Unknown at 1:35 PM

Can you help me get in touch w/ MArk Kirchner? I am putting together a book on history of skating and need info/details on Rad Ramp/Loop of Death timeframe
thx!
info@addiktskateboards.com

can U put me in touch w/ Mark Kirchner please?
I am putting together a book on 70's skate history and I need Loop of death/Rad ramp details/history/timelines....
thx!
info@addiktskateboards.com