THE WONDERFUL WIZARD OF DIX by WIZARDOFBAUM 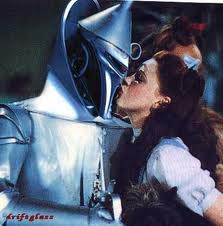 and had so much to say

thought he was so tough

Fluff and Dorothy spent their days in the sun

fetching bones that Dorothy threw and such fun

One day in the woods, Dorothy ran into a tree

suddenly her world became so dark to be

Opening her eyes to a gravel road

and hearing croaks of a toad

With Fluff by her side she walked for many a mile

skipping and always showing her smile

Along the way she met a man made of steel

and he introduced himself as a person so real

and showed her the rust had damaged his bust

The three ventured further along and now met the broom man

when suddenly, they met another man named dope

Who had a tiny brain and wished he was smart

and would trade his heart for a new start

The five stopped for a rest

when attacked by flocks of pest

Mosquitos the size of a car

made sure they didnt travel far

But the broom man swept them away

to save the day

when horrific sounds of wild beasts came from above

The dope shuttered with fear

and all shed a tear

A giant bear appeared with fangs so sharp and long

Wheras the bear ran, for the dope was first to stand,and did no wrong

Daybreak approached for a new day

and they all went on their way

and to their surprise it was driven by a toad

The toad replied that if Dorothy kissed his cheek

he would grant her any wish with that she may seek

So Dorothy puckered her lips and kissed the frog

and boom, the frog turned into a handsome hog

Dorothy now had any wish she wanted you see

and she thought long and hard and had a plea

Mr. Hog, she said, with baited breath so kind

The frog now a hog, thought for a second, and said yes, my dear

So Dorothy smiled and said she wanted to go back home

I want to marry the steel man who wont rust Mr. Hog

and also take , fluff, my dog

also give smarts to dope

which will give him hope

and give the broom man a place to live

for he needs to sweep and give

that was so loud it scared all the birds

back home with fluff and full of charm

In the end, Dorothy Dix married the steel man and dinner she did fix

and through the years of bliss, she gave birth to four steel dix.
Posted by Unknown at 7:30 AM