THE BRAIN IN LOVE BY HELEN FISHER 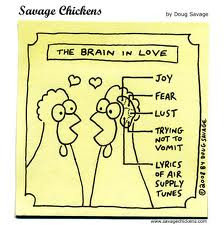 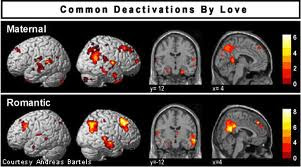 Have you just fallen madly in love? Thus began the announcement I posted on a bulletin board for psychology students on the Stony Brook campus of the State University of New York. I had come to believe that romantic love is a universal human feeling, produced by specific chemicals and networks in the brain. But exactly which ones? Determined to shed some light on this magic, I launched a multipart project in 1996 to collect scientific data on the chemistry and brain circuitry of romantic love.

My working hypothesis was that three related chemicals in the brain--dopamine, norepinephrine and serotonin--play a role in romantic passion. I speculated that the feelings of euphoria, sleeplessness and loss of appetite as well as the lover's intense energy, focused attention and increased passion in the face of adversity might all be caused in part by heightened levels of dopamine or norepinephrine in the brain. Similarly, I believed that the lover's obsessive thinking about the beloved might be due to decreased brain activity of some type of serotonin. I also knew these three compounds were much more prevalent in some brain regions than in others. If I could establish which regions of the brain become active while one is feeling romantic rapture, that might confirm which primary chemicals are involved. Perhaps these data would help explain the evolutionary roots of romantic love, why we choose one person rather than another, even how people can find and sustain this glorious passion.

After a conversation with a neuroscientist at the Albert Einstein College of Medicine, I developed a scheme. I would collect data on brain activity while love-smitten subjects performed two separate tasks: looking at a photograph of his or her beloved and looking at a "neutral" photograph of an acquaintance who generated no positive or negative romantic feelings. Meanwhile, I would use a functional magnetic resonance imaging (fMRI) machine to take pictures of the subject's brain. The fMRI machine records blood flow in the brain. It is based in part on a simple principle: brain cells that are active use more blood than quiescent brain parts in order to collect the oxygen they need to do their job. I had already invited Lucy Brown, a neuroscientist at the Albert Einstein school, to interpret the scanning results. But I had one concern about the design of the experiment. I knew that lovers have a hard time not thinking about their beloved. I was afraid that the lovers' passionate romantic thoughts, generated as they looked at the photo of a sweetheart, would carry over and contaminate their passive thoughts as they looked at the neutral photo. Art Aron, a research psychologist at SUNY Stony Brook, who joined our team, along with graduate students Deb Mashek and Greg Strong, recommended that we use a "distraction task," a standard psychological procedure to wash the brain clean of emotion. We settled on a particular "distraction task" that amuses me to this day. Between looking at the photo of the sweetheart and the photo of a boring acquaintance, subjects were shown a large number (like 8,421) on the screen and asked to mentally count backward in increments of seven. The point: to cleanse the mind of strong feelings.

Now we were ready to gather our subjects, using word of mouth and the HAVE YOU JUST FALLEN MADLY IN LOVE? poster. Just and madly were the operative words. We sought only candidates who were so intensely in love that they could hardly eat or sleep, people whose romantic feelings were fresh, vivid, uncontrollable and passionate.

They were not difficult to find. Students immediately began to call Aron's psychology lab to volunteer. Mashek weeded out those who had metal in their heads (such as lip, tongue or nose jewelry or braces on their teeth) that would affect the magnet in the fMRI machine. She also excluded those who were claustrophobic, those taking medication that could affect brain physiology, and men and women who were left-handed. Brain organization can vary with handedness, and we needed to standardize our sample as much as possible.

At this point, I interviewed each candidate. My first question was always the same: "How long have you been in love?" My second question was the most important: "What percentage of the day and night do you think about your sweetheart?" Because obsessive thinking is a central ingredient of romantic passion, I sought only participants who thought about their beloved almost all their waking hours. I also looked for men and women who laughed and sighed more than usual during the interview.

If a potential subject showed signs of passion, I invited him or her to participate. We acquired two photographs: one of the beloved and one of an emotionally neutral individual. Generally the latter was someone the subject had known casually in high school or college. Then we set a date to put each subject into the brain scanner.

The procedure was simple but not easy. First Mashek and I made the participant as comfortable as possible in the scanner--a large, horizontal, cylindrical, cream-colored plastic tube that is open at both ends and extends from above the head to about the waist. After taking preliminary scans to establish basic brain anatomy, the 12-min. experiment started. First the subject looked at the photograph of the beloved on the screen for 30 sec. as the scanner recorded blood flow in various brain regions. Next the subject was shown a large number and asked to count backward for 40 sec. The participant then looked at the neutral photograph for 30 sec. while the brain was scanned again. Finally the subject was shown another large number and asked to count backward again, this time for 20 sec.

This cycle (or its reverse) was repeated six times--enabling us to collect 144 scans of different brain regions for each participant. After the experiment was over, I interviewed all the subjects again, asking how they felt and what they were thinking about during all parts of the test. To express our gratitude, we gave each participant $50 and a picture of his or her brain.

--THE BRAIN IN LOVE

Before we could understand the results of our scanning, we had to make an in-depth analysis of the brain pictures. The fMRI machine that we were using shows only blood-flow activity in specific brain regions rather than the chemicals involved. But because scientists know which kinds of nerves connect which kinds of brain regions, they can often surmise which brain chemicals are active when specific regions begin to glow

Many brain parts became active in our love-struck subjects when they focused on their beloved. However, two regions appear to be central to the experience of being in love. Perhaps our most important finding concerned activity in the caudate nucleus. This is a large, C-shaped region that sits deep near the center of your brain. It is very primitive--part of what is called the reptilian brain because it evolved long before mammals proliferated, some 65 million years ago. Our brain scans showed that parts of the body and the tail of the caudate became particularly active as a lover gazed at the photo of a sweetheart.

I was astonished. Scientists have long known that this brain region directs bodily movement. Only recently have they come to realize that it is also a key part of the brain's "reward system," the mind's network for general arousal, sensations of pleasure and the motivation to acquire rewards. Not only did our subjects exhibit activity in the caudate, but also the more passionate they were, the more active their caudate was.

We discovered this in a curious way. Before our subjects entered the brain scanner, we asked each to fill out several questionnaires, including a survey designed by psychologist Elaine Hatfield and sociologist Susan Sprecher called the Passionate Love Scale (see box). We wanted to compare the brain activity of each subject to what that subject reported on a questionnaire. We found a positive correlation: those who scored higher on the Passionate Love Scale also showed more activity in a specific region of the caudate.

We also found activity in other regions of the reward system, including areas of the septum and a brain region that becomes active when people eat chocolate. Chocolate can be addictive. I maintain that romantic love is addictive too.

Another striking result from our FMRI experiment concerned activity in the ventral tegmental area (VTA), a central part of the reward circuitry of the brain. This result was what I was looking for. As you know, I had hypothesized that romantic love is associated with elevated levels of dopamine or norepinephrine. The VTA is a mother lode for dopamine-making cells. With their tentacle-like axons, these nerve cells distribute dopamine to many brain regions, including the caudate nucleus. And as this sprinkler system sends dopamine to various parts of the brain, it produces focused attention as well as fierce energy, concentrated motivation to attain a reward, and feelings of elation--even mania--the core feelings of romantic love.

No wonder lovers talk all night or walk till dawn, write extravagant poetry and self-revealing e-mails, cross continents or oceans to hug for just a weekend, change jobs or lifestyles, even die for one another. Drenched in chemicals that bestow focus, stamina and vigor, and driven by the motivating engine of the brain, lovers succumb to a Herculean courting urge.

--THE DRIVE TO LOVE

All these data had a definite effect on me--they changed my understanding of romantic love. For many years I had regarded this wonderful experience as a constellation of related emotions that ranged from elation to despair. But psychologists distinguish between emotions and motivations--brain systems oriented around planning and pursuit of a specific want or need. And our colleague Art Aron was wedded to the idea that romantic love was not an emotion but a motivation system designed to enable suitors to build and maintain an intimate relationship with a preferred mating partner.

Indeed, because of Aron's dedication to this idea, we had begun our brain-scanning project with two hypotheses: my hypothesis that romantic love is associated with dopamine and other closely related neurotransmitters in the brain, and Aron's theory that romantic love is primarily a motivation system rather than an emotion.

As it turns out, our results suggest that both hypotheses are correct. Romantic love does seem to be associated with dopamine. And because this passion emanates from the caudate nucleus, motivation and goal-oriented behaviors are involved.

We are coming to some understanding of the drive to love--and what an elegant design it is! This passion emanates from the motor of the mind, the caudate nucleus, and it is fueled by at least one of nature's most powerful stimulants, dopamine. When passion is returned, the brain tacks on positive emotions, such as elation and hope. And all the while, regions of the prefrontal cortex monitor the pursuit--planning tactics, calculating gains and losses, and registering one's progress toward the goal: emotional, physical, even spiritual union with the beloved. Nature has produced a powerful mechanism to focus our precious courtship energy on a special other--an evolutionary miracle designed to produce more humans.

"The brain is wider than the sky," wrote Emily Dickinson. Indeed, this 3-lb. blob can generate a need so intense that all the world has sung of it. And to make our lives even more complex, romantic passion is intricately enmeshed with two other basic mating drives, the sex drive and the urge to build a deep attachment to a romantic partner. Ah, the web of love. How these forces feed the flame of life.
Posted by Unknown at 8:34 AM