From Wikipedia, the free encyclopedia
Santa Anita Park is a thoroughbred racetrack in Arcadia, California, United States. It offers some of the prominent racing events in the United States during the winter and in spring. With its backdrop of the San Gabriel Mountains, it is considered by many as the world's most beautiful race track.[1] The track is home to numerous prestigious races including both the Santa Anita Derby and the Santa Anita Handicap as well as hosting the Breeders' Cup in 1986, 1993, 2003, 2008, 2009, 2012 and 2013. In 2010, Santa Anita's ownership was moved to MI Developments Inc. (MID). Trevor Denman is the track announcer.

Santa Anita Park was opened on December 25, 1934 and is the oldest racetrack in Southern California. It was designed in the art deco style by architect Gordon B. Kaufman. Originally part of "Rancho Santa Anita", owned originally by former San Gabriel Mission Mayor-Domo, Claudio Lopez, named after a family member "Anita Cota". The ranch was later acquired by rancher, Hugo Reid, a Scotsman. Later, it would be owned by gold prospector Lucky Baldwin. He initially founded a racetrack adjacent to the present site in what is today, Arcadia, outside of the city of Los Angeles in 1904. It closed in 1909 and burned in 1912.
In 1933, California legalized parimutuel wagering and several investor groups worked to open racetracks. In the San Francisco area, a group headed by Dr. Charles H "Doc" Strub was having trouble locating a site. In the Los Angeles area a group headed by movie producer Hal Roach was in need of further funds. These two groups combined and the newly-formed Los Angeles Turf Club reopened the track on Christmas Day in 1934. In February 1935, the first Santa Anita Handicap was run. The race's $100,000 purse, the largest of any race ever in the United States until that time, produced its nickname the Big 'Cap.

Art deco entrance to Santa Anita's grandstands.
In its heyday, the track's races attracted such stars Betty Grable, Lana Turner, Edgar Bergen, Jane Russell, Cary Grant, Ester Williams, and other stars. Bing Crosby, Joe E. Brown, Al Jolson, and Harry Warner were all stockholders.[2]
Under the leadership of Doc Strub, Santa Anita initiated many innovations that are now standard in thoroughbred horse racing, such as the use of starting gates and photo finishes for every race. It is interesting to note that the implementation of photo finishes at Santa Anita actually recorded an increase in dead heats. Santa Anita was so successful that in its first year under Doc Strub's leadership, it paid its investors a 100% dividend on their investment.
In 1940, Seabiscuit won the Santa Anita Handicap in his last start. Two years later, in 1942, racing at Santa Anita was suspended due to theSecond World War. From 1942 to 1944, Santa Anita was used as a Japanese American internment center with up to 17,000 people living in horse stables, including then-unknown actor George Takei. After the track reopened in 1945, it went through the postwar years with prosperity. A downhill turf course, which added a distinctly European flair to racing at Santa Anita, was added in 1953.
Due to its proximity to Los Angeles, Santa Anita has traditionally been associated with the film and television industries. The racetrack sequences in the Marx Brothers 1937 classic A Day at the Races were filmed there, and The Story of Seabiscuitwith Shirley Temple was filmed on location in 1949.[3] Several stars, including Bing Crosby, Spencer Tracy, Errol Flynn, Alex Trebek, and MGM mogul, Louis B. Mayer, have owned horses that raced at the park.
The 1958 Santa Anita Derby was attended by 61,123 people, making the attendance that day a record crowd. They had come to watch Silky Sullivan come from 28 lengths off the pace and win—going away.
The 1960s brought about a major renovation of Santa Anita Park, including a much-expanded grandstand as well as major seating additions. In 1968, Del Mar Racetrack relinquished its dates for a fall meeting. A group of horsemen includingClement Hirsch intervened and established the not-for-profit Oak Tree Racing Association. Oak Tree had no facilities of its own and rented Santa Anita Park for its first autumn meeting in 1969. The Oak Tree Association has since become the operator of the autumn meet at Santa Anita Park. This meet usually runs from the end of September until early November. Many key stakes races are held during the Oak Tree Meeting, including many preps to the Breeders' Cup races. Oak Tree has been given the privilege of holding the Breeders' Cup itself on six occasions: 1986, 1993, 2003, 2008, 2009, and 2012. The Oak Tree meet relocated to Hollywood Park for 2010[4] and the track has agreed to host a meet in 2011.[5]
Prosperity continued at Santa Anita throughout the 1970s and the 1980s. In 1984, Santa Anita was the site of equestrianevents at the 1984 Olympics.[6] The following year, the track set an attendance record of 85,527 people on Santa Anita Handicap Day. However, recognizing the potential revenue boon to the State of California, the California Legislature expanded off track betting, bring operating betting parlors within closer driving distance of the race-day tracks. While the Santa Anita meeting could still draw large crowds, attendance had decreased by a third. Only 56,810 people were at the park for Santa Anita Derby Day 2007 to witness a Grade I event. 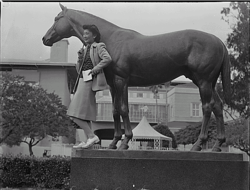 The Seabiscuit statue, created by American sculptor Jame Hughlette ("Tex") Wheeler [7] was hand tooled by Frank Buchler, a German immigrant the owner of Washington Ornamental Iron Company Los Angeles. Washington Ornamental Iron Company built all of Santa Anita's facilities. Lily Okuru, a Japanese American woman held at Santa Anita Park, poses with the statue of Seabiscuit, 1942.
In 1997, Santa Anita Park was acquired by Meditrust when it purchased the Santa Anita Companies for its unique Real Estate Investment Trust paired share corporate structure. Following the elimination of the special tax treatment accorded Pair Share REITs, Meditrust sold the track to Magna Entertainment Corp. Magna still owns Santa Anita Park. In 2006, Gulfstream Park and Santa Anita cohosted the Sunshine Millions,[8] a day of competition with $3.6 million in stakes races between horses bred in theState of Florida and those bred in the State of California.
In 2006, there was a proposal to close Santa Anita Park and use its location as the site of a new retail/entertainment complex. This proposal was soundly defeated when the adjacent Westfield Santa Anita Mall (built in 1974 on the site of the old barns and training track) began its expansion, and due to the continuing popularity of the racetrack. In April 2008, a plan was approved to use large parts of the existing track parking lot to construct another mall. The "Shops at Santa Anita" were planned to open in 2010, no ground has been broken for the project, but it tentively scheduled for 2012[9][10]
At Santa Anita Park's European-style paddock there are statues of jockeysGeorge Woolf, Johnny Longden, Bill Shoemaker and Laffit Pincay, Jr. plus a memorial bust of announcer Joe Hernandez and one of trainer Charlie Whittingham with his dog, Toby. There is also a lifesize bronze of Seabiscuit in the walking ring at Seabiscuit Court; a similar bronze of John Henry was unveiled near the Seabiscuit statue in December 2009. Buried near the paddock isEmperor of Norfolk, the best horse Lucky Baldwin ever owned, along with three other great Baldwin horses: Volante, Silver Cloud, and Rey El Santa Anita, all four of them winners of the prestigious American Derby.
Since 1950, Santa Anita Park has annually presented the George Woolf Memorial Jockey Award to a rider who demonstrates high standards of personal and professional conduct, on and off the racetrack.
South African native Trevor Denman has served as the track announcer at Santa Anita since 1983. Denman is noted for his calls beginning with "And awaaay they go..." and his distinctive gravelly voice. 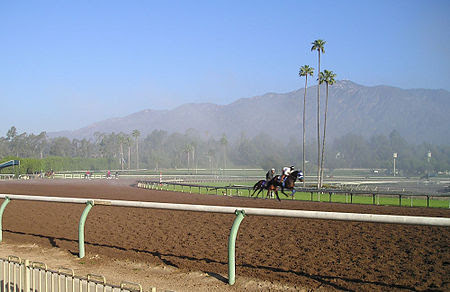 The Santa Anita track is set against the backdrop of the San Gabriel Mountains.
Santa Anita has a one-mile (1,609 m) natural dirt main track which rings a turf course measuring 9/10 of a mile, or 7 furlongs plus 132 feet (1,448 m). In addition, it has an unusual hillside turf course which crosses the dirt and is used mainly to run turf races at a distance of "about" 6½ furlongs (exact distance 64½ feet [19.7 m] less than same, or 1,288 m). This type of track is one of the few of its kind in America.
To comply with a State of California mandate, Santa Anita replaced its dirt racing surface with a new synthetic surface called Cushion Track, a mixture of silica sand, synthetic fibers, elastic fiber, granulated rubber and a wax coating. The new Cushion Track opened for training on Sept 4, 2007 and hosted its first live race on Sept 26, 2007. The track lost 11 racing dates in 2008 due to a drainage problem with the new material, but intensive maintenance and the addition of a liquid binder greatly improved the artificial surface. Santa Anita replaced the artificial surface with a return to an all natural dirt surface in December 2010.[11]
Santa Anita occupies 320 acres (1.3 km2). It has a 1,100-foot (340 m)-long grandstand, which is a historic landmark that seats 26,000 guests. The grandstand facade is rendered in an Art Deco style and is largely the original from the 1930s.[12]The track infield area, which resembles a park with picnic tables and large trees, can accommodate 50,000 or more guests. The Park also contains 61 barns, which house more than 2,000 horses, and an equine hospital.[13]

In 2000, the racetrack was named to America's "Most Endangered Historic Places" list. The Santa Anita Racetrack was listed in the National Register of Historic Places in 2006, but continued to be threatened by developer's plans. A themed entertainment complex proposal was aborted, but there were new plans are in the works for the parking and support areas adjacent to the historic race track and grandstands.[3]
The Arcadia City Council approved a plan In April 2007 to develop an 830,000 square foot commercial, retail, and office complex in the south parking area, where the barracks that housed interned Japanese Americans during WWII are located. The proposal planned to tear down the South Ticket Gate and the 1938 Saddling Barn, and to install a simulcast facility in the center of the historic grandstand.[3] As of May 2011, plans to build another mall next to Santa Anita Park were abandoned.[14] Protests against the project by the Westfield group, owner of a mall adjacent to the racetrack, were named as a major factor in halting the building plans. Magna International, owner of Santa Anita Park, has declared bankruptcy.[14]

Horse Racing TV (HRTV) is a 24-hour television based multimedia network dedicated to horseracing which features racing action from many of the sport's greatest racetracks around the world. HRTV broadcasts live from Santa Anita Park.
Expert American television personality commentators employed by HRTV):