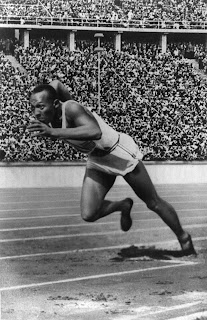 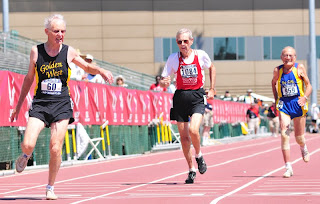 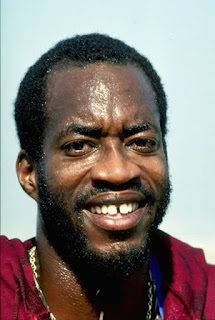 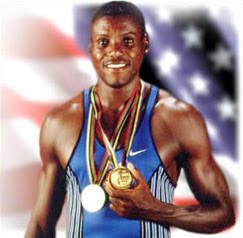 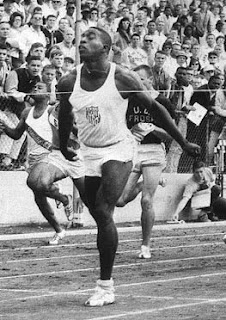 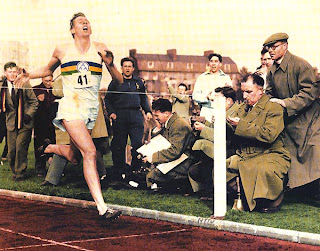 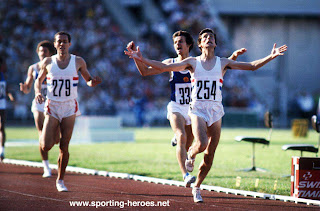 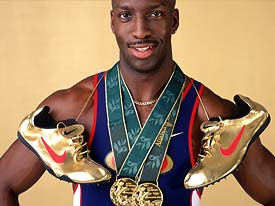 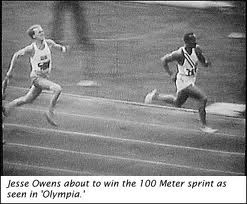 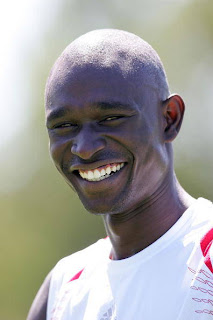 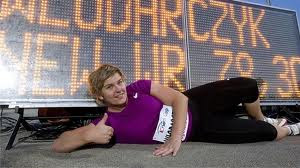 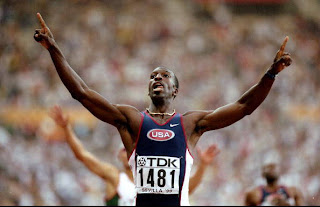 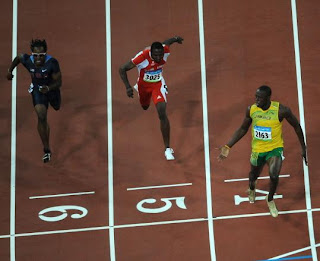 Usain Bolt, Jamaica, 9.58. Bolt, who was once a 200-meter specialist, broke the 100-meter world mark for the third time during a thrilling showdown with Tyson Gay at the World Outdoor Championships in Berlin on Aug. 16, 2009. The Jamaican pulled ahead of Gay early in the race and never let up, finishing in 9.58 seconds. The victory came exactly one year after Bolt broke the record for the second time, winning the 2008 Olympic gold medal in 9.69.


2. 200 Meters
Bolt, Jamaica, 19.19. Bolt broke his own world mark at the 2009 World Outdoor Track & Field Championships, where he finished in 19.19 seconds on Aug. 20. He first broke Michael Johnson's 12-year-old mark during the Olympic final exactly one year ealier, finishing in 19.30 seconds while running into a slight headwind (0.9 kilometers per hour).

3. 400 Meters
Michael Johnson, USA, 43.18. Many expected Johnson to eventually break Butch Reynolds' mark of 43.29 seconds, set in 1988, but 1999 seemed an unlikely year for the record to fall. Johnson suffered from leg injuries that season, missed the U.S. Championships and ran only four 400-meter races before the World Championships (where he gained an automatic entry as the defending champ). By the day of the World final, however, it was apparent that Johnson was in top form and that Reynolds' record was in jeopardy. Johnson pulled away from the pack in mid-race and sprinted into the history books.

4. 800 Meters
David Rudisha, Kenya, 1:41.01. Former record-holder Wilson Kipketer (1:41.11) once told David Rudisha that he could be the one to break Kipketer's mark. Kipketer was right. Rudisha broke the record on Aug. 22, 2010, running 1:41.09 in Berlin. One week later, on Aug. 29, Rudisha lowered the mark to 1:41.01 at the IAAF World Challenge meet in Rieti, Italy. Rudisha followed his pacesetter through quick opening laps in both runs (48.2 seconds in Rieti), then nearly maintained his speed over the final 400 meters. Both marks are currently subject to standard IAAF verification procedures.

Wilson Kipketer, Denmark, 1:41.11. Sebastian Coe's mark of 1:41.73 in the 800 stood for 16 years before Kipketer's amazing six-week attack on the mark in 1997. A native Kenyan running for Denmark, Kipketer tied Coe's record on July 7 of that year, then broke the mark twice in August, running 1:41.24 on Aug. 13, then lowering the record to 1:41.11 on Aug. 24 at the Cologne Grand Prix in Germany. Kipketer, known for excellent form and a strong finishing kick, benefited from the fast pace set by Kenyan David Kiptoo to set the record.

7. One Mile
Hicham El Guerrouj, Morocco, 3:43.13. The mile isn’t run in the Olympics or the world championships. But it still captures people’s attention, even though the record has been unchanged since Morocco's Hicham El Guerrouj won a brilliant battle with Noah Ngeny on July 7, 1999, in Rome’s Olympic Stadium. With Ngeny virtually on his heels down the stretch, El Guerrouj broke the mile record with a time of 3:43.13. Ngeny’s time of 3:43.40 remains the second fastest mile.

10. 5,000 Meters
Kenenisa Bekele, Ethiopia, 12:37.35. Kenenisa Bekele took two seconds off the 5,000-meter record with a time of 12:37.35 set in Hengelo, The Netherlands on May 31, 2004. Kenyan David Kiplak set the pace for about half the race, leaving Bekele to attack the record on his own thereafter. Bekele was more than one second behind the record pace entering the final lap, but finished the lap in 57.85 seconds to earn the prize.
11. 10,000 Meters
Kenenisa Bekele, Ethiopia, 26:17.53. Keninisa Bekele added the 10,000-meter record to his resume on Aug. 26, 2005, running 26:17.53 in Brussels, Belgium. Bekele's pace-setter was his brother Tariku, who helped Bekele stay five seconds ahead of the record pace through 5,000 meters. Bekele remained ahead of the necessary pace and, as he did when breaking the 5,000 record, Bekele finished strong, with a 57-second final lap.

12. 110 Meter Hurdles
Dayron Robles, Cuba, 12.87. In 2006, Dayron Robles witnessed the 110-meter hurdles world record being broken, as he ran fourth in the race in which China's Liu Xiang set the former mark, winning in 12.88 seconds. Robles was fourth in that race, in 13.04. On June 12, 2008 Robles again witnessed a record-breaking performance in the 110 hurdles, but this time he was the one setting the mark as he nudged the record down to 12.87 with a Grand Prix victory in Ostrava, Czech Republic.

13. 400 Meter Hurdles
Kevin Young, USA, 46.78. Young was a respectable high school hurdler but he didn't receive a major college scholarship. So Young walked on at UCLA and blossomed quickly, winning NCAA 400-meter championships in 1987-88. He later employed an unusual strategy to break the world record at the 1992 Olympics. Whereas top-level hurdlers generally take 13 strides between hurdles in the 400, Young decided to use just 12 on the fourth and fifth hurdles. He'd noticed previously that he was using shorter, choppy strides at that portion of the event. By reducing his strides to 12, Young took longer strides and gained speed.

14. 3,000 Meter Steeplechase
Saif Saaeed Shaheen, Qatar, 7:53.63. The Kenyan-born Shaheen set the mark on Sept. 3, 2004 in Brussels, Belgium, on the same track that former world record-holder Brahim Boulami established his record in 2001. Boulami witnessed his record’s demise first-hand, finishing third in the event. Shaheen sat in third for much of the race, taking the lead with three laps remaining and finishing in 7:53.63.

15. 20 Kilometer Race Walk
Vladimir Kanaykin, Russia, 1:17:16. Kanaykin is the official - but controversial - record-holder courtesy of his performance at the IAAF Race Walking Challenge, held in Saransk, Russia on September 29, 2007. Kanaykin finished in 1:17:16, breaking the previous mark held by Ecuador's Jefferson Perez (1:17:21). In 2008, Sergey Morozov (1:16:43) and Kanaykin (1:16:53) both beat the record at the Russian National Championships, but the performances were disqualified from record consideration when both tested positive for performance-enhancing drugs and drew two-year bans.

16. 50 Kilometer Race Walk
Denis Nizhegorodov, Russia, 3:34:14. Nizhegorodov remained strong throughout the race. His fastest lap of the day occurred in the race's 46th kilometer. Nizhegorodov’s record was set during the IAAF World Race Walking Cup in Cheboksary, Russia on May 11, 2008. The previous mark of 3:35:47 was set by Australia’s Nathan Deakes.

17. Marathon
﻿Haile Gebrselassie, Ethiopia, 2:03:59. Gebrselassie broke his own world record (2:04.26) at the Berlin Marathon on Sept. 28, 2008, with a time of 2:03:59. Four pacemakers helped keep Gebrselassie on track through 32 kilometers of the 42.2-kilometer (26 miles, 385 yards) event. But he wasn’t alone for the final 10 kilometers, as Kenyans James Kwambai and Charles Kamathi maintained their challenges, pushing Gebrselassie from behind. The Ethiopian finally pulled away in the final five kilometers.

24. Pole Vault
Sergey Bubka, Ukraine, 6.14 meters (20 feet, 1﻿¾ inches). For 10 years, the only competition Bubka had for the pole vault world records came from - Bubka. The Ukrainian broke and re-broke the indoor and outdoor records 35 times between 1984-94. His outdoor mark of 6.14 meters, set in 1994, and his indoor best of 6.15 meters, set in 1993, still stand as world marks. Bubka possessed sprinter's speed with great strength, allowing him to use a heavier pole than most vaulters his size. Additionally, Bubka held the pole unusually close to the end to gain greater leverage.

27. Shot Put
Randy Barnes, United States, 23.12 meters (75 feet, 10 inches). It’s one of the oldest and most controversial marks in the track and field record book. Barnes was not only ready to take a run at Ulf Timmerman’s world record in the spring of 1990 – Barnes claims to have thrown 79-2 in practice before breaking the mark – but he called his shot. Days before the Jack in the Box Invitational in Los Angeles, Barnes told reporters that Timmerman’s record “should go” at the May 20 meet. Go it did. All of Barnes’ six attempts traveled past 70 feet. He scored the record on his second try, then went on to average 73-10¾ for the day. Less than three months later, however, Barnes tested positive for an anabolic steroid. Barnes’ two-year suspension was upheld on appeal, although the review panel criticized the drug testing procedure on which his suspension was based.