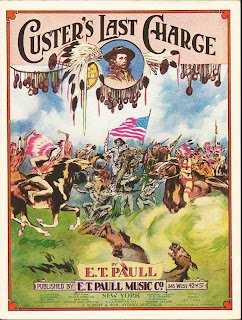 Edward Taylor Paull - 1922: General George Armstrong Custer wrote that he often felt misunderstood by his men and some of his superiors. History has shown him to be an overachiever, largely due to a rivalry with his brother Thomas Custer, who had shown a great deal of leadership and valor during the American Civil War, where he received two Congressional Medals of Honor. George did have a big ego and a propensity for self-absorption. These, more than uninformed decision making, may have led to the death of Custer and 265 men of the Seventh Cavalry Regiment at the hands of well over 2,000 Sioux and Cheyenne Native Americans at Little Bighorn in 1876, better known as "Custer's Last Stand". Rest assured that this well-crafted late Paull work is replete with the expected descriptions of the battle, including a reference of Custer as "White Chief Long Hair," and actual Native American lyrics and melody in the beginning
Posted by Unknown at 6:17 AM