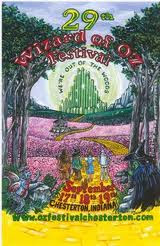 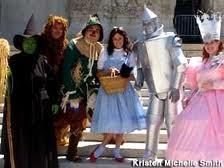 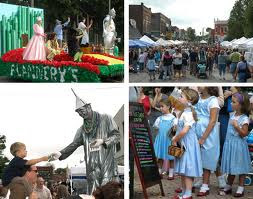 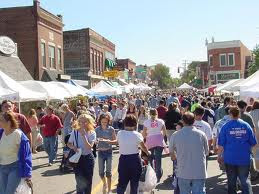 Chesterton Wizard of Oz Festival, rain and all, a big success

The 29th annual Chesterton Wizard of Oz Festival—rain and all—was a smashing success.

Blout, executive director of the festival and of its local sponsor, the Duneland Business Initiative Group, did concede that Saturday afternoon’s rain put something of a damper on attendance. “Attendance was a little bit down,” she said. “But everyone seemed to be happy. And Sunday was just beautiful.”

The parade itself, on the other hand, on Saturday morning, may well have been the best, most spectacular ever, at least according to the Oz celebrities. “The people in the parade told me it was the biggest they’d ever seen,” Blount said. “Last year’s was big but this year’s was just huge. People were standing five and six deep to watch it.”

Had it not been for the rain, Blount added, some of the vendors may have broken the bank on Saturday. “Right after the parade they were swamped. One vendor said that if it had only been nice, she probably would have sold out.”

“Sunday’s finale was the same,” Blount noted. “The celebrities said it was the most people who ever showed up.”

And the 2011 edition of the Oz Fest is definitely on, Blount announced. “It’s the 30th anniversary,” she said. “So yes, we’ll be back next year.”

James C. Wallace, aka MAGICIAN OF OZ and prolific author of oz books in his own realm attended the festival.

Magician of Oz
The Royal Magician of Oz trilogy is a 3 volume tale of magic and wonder that recalls the cherished values of friendship, loyalty and courage. This timeless tale of Oz reminds us of the value of overcoming our deepest fears and conquering the challenges that might otherwise defeat us. Volume One, Magician of Oz and Volume Two, Shadow Demon of Oz are now available for your reading enjoyment. Volume Three, Family of Oz is due to be released in early 2011.