THE WONDERFUL WIZARD OF OZ by ERIC SHANOWER AND SKOTTIE YOUNG,,SIGNED,,FIRST EDITION 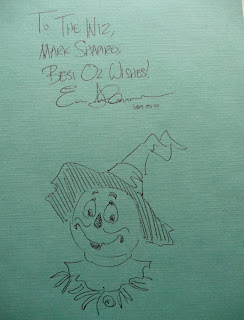 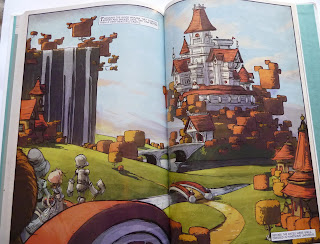 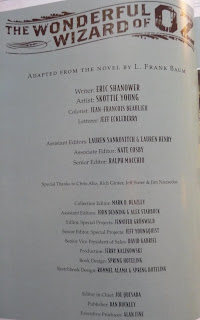 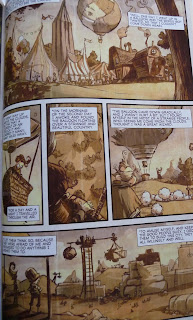 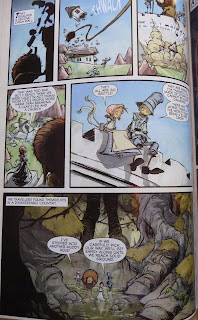 Eric Shanower,extraordinary artist, was kind enough to sign his WONDERFUL WIZARD OF OZ creation as shown to the left.

The first issue of Marvel’s adaptation to the Baum’s The Wonderful Wizard of OZ begins with a whirlwind and ends as two become three. It is the kick-off to an 8-issue series under the Marvel Illustrated line.

For so many of us childhood is an adventure, and one that we don’t break from unless we watch or read another’s adventure. As adults we call it escapism, but as children these escapades are the very definition of interaction; putting us on roads of confrontation and conflict. It would be true to say that “for many people my age” OZ represents among my first destinations. It would however be a statement that doesn’t do justice to the several generations that could claim such of their journey to the Emerald City.

It is this familiarity that is both the selling point and potential pitfall of any adaptation. The line of being faithful yet still presenting something that is of creative interest to both new and old readers alike is ever a fine one. Even when having a creative team that makes sound sense, it still does not insure a successful adaptation. The creative team that Marvel put together to adapt The Wonderful Wizard of OZ happens to make perfect sense– one that once heard make others sound less than optimal afterwards. Eisner award winning creator Eric Shanower is a name that OZ fans in general are no doubt aware of. He’s written and illustrated OZ related novels and comics professionally for more than twenty years. Oddly enough, if any other artist made more sense than the one ultimately chosen, it would probably be Shanower. That speaks volumes about the writer, as the artist Marvel does have on the title took the ‘line’ I spoke of earlier and proceeded to perfect back flips on it while juggling several (yellow) bricks. We know immediately that Skottie Young has been to OZ before, and his work seems a feverish yet innocent remembrance, but one that is not entirely homage, not entirely comfortable. The first pages make us believe; they sell us our journey, but it the last page that sells it’s continuance. No matter how charming, or how quaint, we catch ourselves thinking, “we’ve heard the story; we have seen this story before”, and it is when we catch a glimpse of the road ahead; over the shoulder of a trio of silhouettes, that though unique in rendering– still somehow reveal themselves to be iconic. It’s an image that promises more. One that whispers that the unknown may yet await– even as we think the steps ahead are those we have rehearsed before.

I am not a comic book reader who is generally motivated by art. I love art, and obviously it’s the significant quality of the medium, and I’m a frequent buyer of original comic book. That said, I rarely make reading purchasing decisions based on the artist. I’m much more prone to follow Vaughan, Moore, Gaiman, Parker, and Ellis than I am Bachalo, Ladronn, Keith, Adams, or Golden – artists that produce work that I love -due to my tendency to read entire TPB’s without glancing at one picture the first time around. The Wonderful Wizard of Oz is an exception due to the subject matter. In an interview I conducted with Shanower last month, he spoke on a question of mine regarding the visual aspect of Oz:

The Marvel comic book version of The Wonderful Wizard of Oz isn’t dialogue heavy. That’s certainly one of the things I was conscious of while writing the script. And believe me, it hurts to do balloon placements over Skottie’s art—I don’t like covering any of it. My intention all along has been to remain faithful to L. Frank Baum’s text while adapting it into a valid comic book. In writing the scripts I retained Baum’s dialogue to the extent necessary to convey the story while being conscious all the time of the pacing of comic book panels and pages as well as the information that the art would show.

A writer knows to adds words to give thought substance; one becomes a storyteller when knowing less is often more, and allowing the art and our own imagination to fill in the blanks. Shanower trusts the reader, he trusts Young, but more than anything he trusts Baum and penetration of OZ.

Currently in the (prose) book world we are starting to see several writers promoting themselves for the various awards and honors associated with the Science Fiction and Fantasy field. Most of those awarding bodies recognize the most outstanding art of the year, and Skottie Young’s coming out party to the non-comic world should literally draw consideration. The Wonderful Wizard of OZ is an adaptation of Baum’s stories, not the movies, but Young’s visuals capture the atmosphere and aura that so many of us could not – can not – get off of our minds no matter how many of the books we read, or how long it’s been since we’ve seen the films. Without this, even the most ardent of bibliophiles would reject even unique creative endeavor and accomplishment challenge what are eyes already remember. Walt Disney once said, “Of all the inventions of mass communication, pictures still speak the most universally understood language”, and like so much of the great art that accompanies projects with that quoter’s name, Mr. Young’s art is fluent in any hands, an ansible brush that neither time or borders between readers will mar. There is a series of panels in this issue that depicts Dorothy’s meeting of the Scarecrow that will make you do a double take, causing you to wonder if a Scarecrow just winked at you. At this moment you knew Shanower and Young did more than the cliché “breathe life” into a project. It was at this moment that they made OZ speak to you.