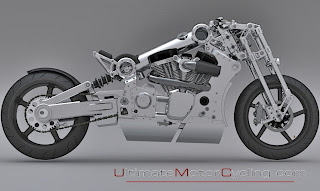 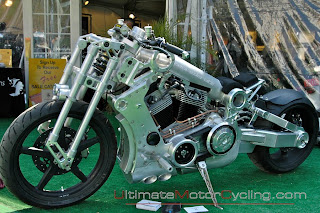 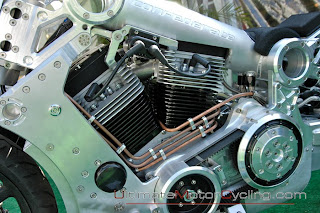 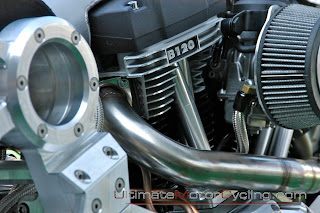 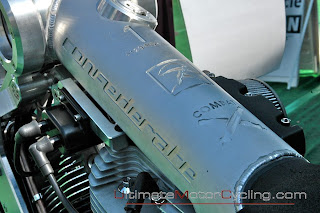 Some bikes are part of a scene. Others, like the P120 Fighter Black Flag, are the scene. Cranking 160 horsepower from its 120-cubic-inch radial twin, Confederate Motor’s latest not only guns it and runs it but also blazes a distinct and stylized path in American motorcycling.

One look at the P120 Fighter, and it’s clear it isn’t a Harley. It has a skeletal, minimalist style that seems to turn the bike inside out, revealing a design philosophy that challenges the look of each component as well as its placement.

It takes 120 hours to assemble the 480 parts on the Fighter, and many of them aren’t found in the usual places. The underslung compact dual exhaust, for example, puffs on to the rider’s gear-shifting foot from the bottom, front left side of the bike. The oil tank is a canister just below the handlebars with windows on either side that show the 20/50 churning.


The electrical system is embedded in the dual-sided swing arm. And the gas tank begins as the Fighter’s tubular backbone but is stored in a separate reservoir at the bike’s base; a pump then channels the fuel into an engine that is so high compression, riders must first push decompression valves on the tops of each massive cylinder before firing up.

I had the Fighter for a day, which prompted an inordinate amount of near "Exorcist"-style head turning and photo taking, and not only because onlookers could hear my unbaffled exhaust long before they could see me thundering toward them and could prep their phone cameras accordingly. By the time my low-riding wheels were in full view, they could witness the double-wishbone front suspension moving up and down like the cantilevered arms of an earth-mover, then take in the strikingly stretched and triangular profile as I sped toward the horizon.

The P120 Fighter has a hot-rod-esque, 63-inch wheelbase and a 240-mm balloon for a back tire, but its rake and trail geometry are optimized, so though it didn’t exactly corner like a Ducati, it didn’t send me into oncoming traffic either. The Race Tech multi-speed adjustable suspension prevented the bike from bottoming out, and the forward pegs were placed so high they had absolutely no chance of scraping in tight turns, even if I had managed to muscle the bike that far over.

There is a level of menace to the P120 Fighter. The transmission drive belt is exposed and could very well have chewed off my boot if the pegs weren’t placed properly. The small, hinged saddle looked more like a bear trap than anything I wanted to straddle.

Confederate’s inspiration for the P120 Fighter was the outlaw motorcycle clubs of the ‘60s. Outlaw motorcycling being born from WWII fighter pilots, it follows that Confederate would look to aircraft for some of the P120 Fighter’s inspiration, such as its riveted, “triple load path” construction. The Fighter’s monocoque backbone, bulkhead and fuselage side plate construction are all made from aircraft-grade aluminum. The squishy rubber buttons and silver toggle switches that operate the turn signals, horn, ignition and high beams are more likely to be found in the cockpit of a Piper Cub than a motorcycle. They’re also unmarked, so it takes some practice to figure out which squishy button does what and avoid inadvertently honking the horn.

Unlike the upcoming C3 Hellcat, which will employ an all-new Confederate/S&S powertrain architecture, the P120 Fighter uses a counterbalanced JIMS motor and transmission co-developed with Confederate. While the clutch is not for the arthritic, the gear shifter was quite soft. There was no crunching with up and down shifts. And it was actually possible to find neutral.

I had a slight problem with the Fighter at the tail end of my day. The bike's whopping 12:1 compression ratio pushed the bike's underpowered starter to the brink, causing it to fail. The starter has since been beefed up and will be replaced on all P120 Fighters, according to Confederate founder Matt Chambers, which is exactly what buyers would demand on a bike that costs as much as this one.

The only modern day machine on display was Confederate Motor's new P120 Fighter, Combat Edition. Borrowing from their enigmatic Wraith, the Fighter's design utilizes the massive backbone and parallelogram girder front fork that launched a thousand opinions, both negative and positive, back in 2003 when the company found both die-hard brand loyalists and pessimistic naysayers in one fell swoop.

On the P120, aluminum is the choice of metals as opposed to the Wraith's carbon fiber, the hefty monocoque backbone constructed of 6061 aircraft grade aluminum and engraved with the bike's moniker. Say what you will about Confederate, but the machines rolling out of their new Birmingham, Alabama digs (on-site at Barber Motorsports Park - the former New Orleans headquarters having been decimated by Hurricane Katrina) are anything but ordinary. Judging by the attention the bike was garnering from gear heads as well as the simply curious, CEO Matt Chambers seems to have done it again; build an iconic motorcycle that borrows very little from the status quo, representing true autonomy (and a bit of rebelliousness) in both design and philosophy.

Copious billet aluminum marries up to beefy aluminum gusseting in beautiful welds. Copper tubing from the oil cooler contrasts the raw aluminum and draws the eye along the exposed workings of the machine, taker the viewer deeper and deeper into the Fighter's nooks and crannies where the mind boggles with design cues and functional, albeit original, ways to conquer the concept of putting a rider onto a two-wheel contraption. Seat and rider support look a little on the light side (read: very little padding) but the whole layout flows into the overall concept quite effectively. Nothing seems out of place or stuck on and there are certainly no last minute fixes.

Weight is being claimed at 460 pounds, but to throw a leg over the P120 is a lesson in deception. The bike feels like a 250cc, partially thanks to all the significant weight being carried low in the chassis. Gauges are modern but with a flare for the minimalistic; basically just speed and RPM. A close-ratio five-speed tranny feeds the power to the rear wheel via chain.

Brembo race-derived 4-piston technology brakes are mated to radial pumps to grab carbon, ceramic, aluminum matrix lightweight discs. Wheels are carbon fiber, with a 19" x 3" on the front, and a massive 18" x 8" rim on the back. However, there's one element on the P120 Fighter that stands as demarcation in the world of motorcycle build and originality; the front fork. A double wishbone design manufactured from 6061 aircraft grade aluminum is linked to aerodynamic dual lightweight tubular wing blades. The intricate yet sanitary design of the front end is wonderful eye candy and provides plenty of speculation on how the whole thing works (evidently quite effectively from the few people who have had the thing on the road).

The Confederate Fighter is powered by a P-120 radial twin. The 1966cc/120 c.i. motor produces a stump pulling 145 ft lbs of torque, with an impressive 160 horsepower at the rear wheel. Only 25 of these machines will be produced, at just two-per month, and then, as the brochure says, "The book will be closed." Thus ensuring exclusivity.
Posted by Unknown at 6:13 AM