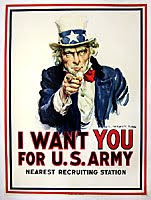 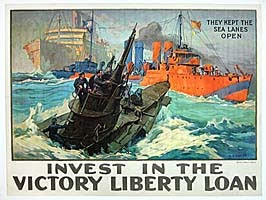 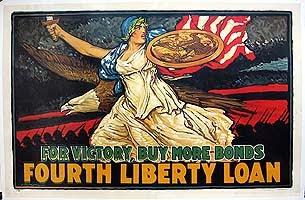 Each of the nations which participated in World War One from 1914-18 used propaganda posters not only as a means of justifying involvement to their own populace, but also as a means of procuring men, money and resources to sustain the military campaign.

In countries such as Britain the use of propaganda posters was readily understandable: in 1914 she only possessed a professional army and did not have in place a policy of national service, as was standard in other major nations such as France and Germany.

Yet while the use of posters proved initially successful in Britain the numbers required for active service at the Front were such as to ultimately require the introduction of conscription. Nevertheless recruitment posters remained in use for the duration of the war - as was indeed the case in most other countries including France, Germany and Italy.

However wartime posters were not solely used to recruit men to the military cause. Posters commonly urged wartime thrift, and were vocal in seeking funds from the general public via subscription to various war bond schemes (usually with great success).

Every government that wages war needs to recruit fighting men and rally public support. During World War I, United States officials waged these public relations battles with tens of thousands of war posters hung in libraries, post offices and schools, both in big cities and along back roads.

Learn more about collecting these powerful antique tools of government propaganda
Eighty years after government printing offices released these war posters, they've become a collector's dream: accessible, inexpensive, powerfully designed, brightly colored, and historically rich. "These posters were so gorgeous artistically, so compelling, and so passionate in their message that people collected them even then," says Nicholas Lowry, director of the poster department at Swann Galleries in New York City. "People see them today and fall in love. I get more calls about World War I posters than any other kind." We asked Nicholas to tell us more about this piece of Americana and also to supply a battle plan for potential collectors. Here's what he told us.

A Wake-up Call
During the American Civil War, Northern and Southern propagandists printed primarily typographical broadsides without artistic embellishments, Nicholas notes. Whereas by World War II, as in later conflicts, the US government got its message out through mass media such as radio and television, rather than through posters. But WW I officials picked posters as their marketing machine gun. "In the era before radio and television, these posters were the only method the US government had to get an important message out to the entire US population," Nicholas says. "The message they sent out was: contribute money, conserve food for the effort, and beware of the enemy."

Poster designers used bright colors and few words to deliver messages that were often less-than-subtle. One of the most crass designs depicted a German soldier as a gorilla marching up American shores with a struggling, bare-breasted American woman clutched in his arms. The poster's message, as delicate as the blood-stained club, was meant to instill a primal fear of the enemy. "It's powerful, rabble-rousing stuff," Nicholas comments. "Some of these posters are extraordinarily un-PC by modern-day standards." In a bit of trivia, Nicholas notes that some movie buffs believe this poster inspired the King Kong series.

A Seductive Appeal
Sometimes the hand that drew WW I posters was a bit less heavy. Illustrator Howard Chandler Christy designed a fleet of WW I posters that almost always featured women. In this Navy recruitment poster, Christy painted a coy-looking woman dressed in a Navy uniform, who laments that she was unable to enlist in the Navy. For a punch line, she commands: "Be a man and do it!" Observes Nicholas: "Who could turn down that kind of invitation from a beautiful woman?"

"It's a very early example of the psycho-sexual gender-bending," Nicholas adds. "She's sort of taunting and challenging men and their masculinity to join the Navy." Nicholas compares this sex-and-marketing cocktail to the successful beer-and-sex ads so common today. "These were instant eye-catchers and brain-catchers."

Small Guns/Big Guns
Most WW I poster lovers are surprised by their affordability. "There is a huge supply right now at between $200 and $500," Nicholas explains. "I tell people that, by and large, these posters are a dime a dozen." The prices are about the same for the lithographs, with their bolder colors, as for the photo offset prints, then in their infancy. Rarer posters, such as the snarling gorilla, would sell in the $6,000 to $9,000 range today, Nicholas estimates.

The classic WWI poster—Uncle Sam pointing out accusingly and saying, "We want you"—was selling for $1,500 as recently as four years ago and now sells for between $3,000 and $4,000. "It's probably the most famous poster of all time," asserts Nicholas. "You know those studies they do of the most recognized faces in the world? They usually name Mickey Mouse and Michael Jordan. My guess is that most people anywhere would recognize the Uncle Sam in this poster too." War posters made for regional markets—say only in New York or Chicago or San Francisco—can today go for a few thousand as well.

World War I collectors also covet an extremely rare WWI poster that depicts a woman clutching her child as both sink into the ocean. The image is a reference to a mother and child who were allegedly found drowned, arm in arm, on the Irish shore after a German U-boat sank the British luxury liner Lusitania in the north Atlantic. The 1915 attack claimed the lives of 1,195 people, of whom 128 were Americans, and contributed to drawing the US into the European war. The poster's caption reads simply, "ENLIST." An original copy of that poster most recently fetched $20,000 at auction. "That's the holy grail for most WW I poster collectors," Nicholas says. Generally speaking, poster prices depend on supply, Nicholas says. "If you do a little research you can see if something is readily available or not."

Reproductions
World War I poster collectors also need not worry about fakes, Nicholas says, as most versions aren't expensive enough to attract forgers. Original posters are so common that few printers have bothered to market reproductions. If you are uncertain, remember that originals are printed on more newspaper-like stock, come in a larger size (30 inches x 20 inches is standard), and usually have a dull finish, unlike the magazine-slick finish of modern poster reproductions.

Originals regularly turn up at estate and garage sales and Nicholas says that "I could call 10 dealers and everyone would have tons in stock." Collectors seem to come in various stripes. Women looking for powerful female images go after Christy's women. Corporations go after depictions of male camaraderie, which usually consist of men working or fighting shoulder to shoulder. Chefs, bakers and others who need to fill kitchen wall space often look for posters that appeal to citizens to forego bread for the war effort. Men and women use Uncle Sam's "I Want You" line as a double entendre for their bedroom walls. Says Nicholas: " Almost anyone can find a reason to collect these posters."
Posted by Unknown at 6:43 AM