HOW GOOD IS THE BOWFLEX WEIGHT MACHINE BY JAMES FELL 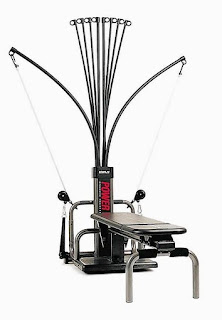 The people in the Bowflex commercials sure are pretty.

If you have any doubt that these models did not get their muscularly sculpted hairless physiques using a Bowflex and its patented Power Something Technology, then Google "Bowflex casting" and you'll find talent agencies looking for ultra-lean gym rats with colored contact lenses to hock this soon-to-be coat rack for three easy payments of way too much money.

Allegedly, this "home gym" is a "total-body solution," as if your body were some kind of math problem in need of solving. Actually, being fat is a math problem, but unfortunately Bowflex's marketing department doesn't understand simple addition and subtraction.

According to the commercials, Bowflex is the ultimate tool for fat loss and muscle building, and you can sculpt an amazing body losing lots of fat in "only 20 minutes, three times a week!" You'll be able to say things like "I'm not on a diet. I'm on a Bowflex." Or, "I gave all my fat clothes to my fat friends." (Speaking of which, we're sure your friends will really appreciate you calling them fat. When you order a Bowflex, does it come with new friends too?)

Using Bowflex's patented "Power Rod® Technology" is like trying to lift weights while having an epileptic seizure and simultaneously shooting meth into your eyeballs. Besides having a history of being unsafe and with its parent corporation (Nautilus Inc.) being fined by the Consumer Product Safety Commission, many bodybuilding discussion boards contain complaints about the machine's limiting and unnatural feeling.

As a guy with 17 years' experience with free weights, I decided to give the Bowflex a try myself and instantly hated it. So I kept trying for another 15 minutes to see if it grew on me, and the only thing that grew was a desire to douse the machine in napalm and hurl it into an active volcano.

In other words, I didn't like it. Free weights provide a much more natural movement for building functional strength.

Beyond the fact that you would hate this machine and it would start gathering dust and errant clothing in short order, the marketers of Bowflex are just really bad at math. While they often use models to flog the products, they do have the odd real person who says he or she owes his or her new physique to the Bowflex.

So let's take the example of one such real-life customer, the sunken-chested bald guy who says he's "living the dream" and states that he lost 26 pounds in 10 weeks using Bowflex.

Using math so simple even a marketing guy with an MBA can do it (I know, because I've got one), let's check those figures:

• Twenty-six pounds of fat over 10 weeks means losing 2.6 pounds per week average. That works out to 9,100 calories.

• The commercial's claim of "only twenty minutes, three times a week" on the Bowflex equals one hour of exercise each week. In one hour of intense weight training, a 220-pound man can expect to burn approximately 600 calories. However, considering that he'd burn 100 just sitting on his couch, the number of extra calories burned is only 500.

• There is no mention of dietary restriction, and in one commercial a model asserts "I'm not on a diet, I'm on a Bowflex."

• Therefore, simply being so cool as to own a Bowflex will miraculously cause you to burn an additional 8,600 calories each week.

Rather than just inform you that the Bowflex is a product of dubious quality and with outlandish claims of efficacy, I'll give you a useful alternative to help you pursue looking sort of close to one of those models.

First off, understand that a fitness model's job is to look that way, so they're highly motivated and spend at least 10 hours each week exercising intensely while following a highly restrictive diet. One hour a week of the most awesome exercise in the world isn't going to change much about the way you look, especially if you don't follow a balanced and calorie-restricted diet at the same time.

So if you want to improve your health and your look, it's going to take some serious effort of both aerobic training — like running, cycling, swimming or anything that gets your heart rate elevated for an extended period of time — to burn off fat, as well as anaerobic muscle-building like weightlifting. The Bowflex is a lame attempt at imitating what you can do with free weights, which are superior in every way, including motivation.

When it comes to getting in shape, nothing is more important than motivation, and some awkward contraption sitting in the corner of your living room can't compete with the TV, phone, fridge, couch and screaming kids. You need to get out of the house and alongside other active people.

Shauna Burke is a researcher in the psychology of health and physical activity at the University of Western Ontario and specializes in how social context affects adherence to an exercise routine. Her research has shown that the highest adherence rates come from exercising away from home in a cohesive group and the lowest is exercising alone at home. In other words, it's not just a Bowflex that won't get used but any type of home exercise equipment.

So if you've got some cash yearning to do its part to improve your health and spur economic recovery, buy some running gear and sign up for a race, or join a gym and hire a qualified personal trainer, or register for some boot camp classes, or go buy a bike and start exploring the neighborhood with your friends.

Fell is a certified strength and conditioning specialist in Calgary, Canada.
Posted by Unknown at 6:26 AM