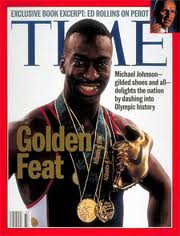 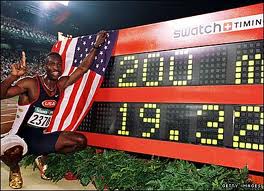 
Michael Johnson at the 2000 Summer Olympics

He is the only male athlete in history to win both the 200 m and 400 m events at the same Olympics, a feat he accomplished at the 1996 Summer Olympics in Atlanta, Georgia. Johnson is also the only man to successfully defend his Olympic title in the 400 m. Aside from his Olympic success Johnson accumulated eight gold medals at World Championships, and is thus tied with Carl Lewis for the most medals won by any athlete in history.[3]

Johnson was noted for his unique running style. His stiff upright stance and very short steps defied the conventional wisdom stating that a high knee lift was essential for maximum speed.

Johnson was born and raised in Dallas, Texas as the youngest of five children, and attended Skyline High School and Baylor University.[4] At Baylor, Johnson was coached by Clyde Hart, and won several NCAA titles in both indoor and outdoor sprints and relays.[2] Among his early collegiate feats, Johnson broke the school record for the 200 m in his very first race with a time of 20.41, and in 4 x 400 m relays he clocked a leg at 43.5. He prepared for the 1988 Summer Olympics in Seoul, but developed a stress fracture of his left fibula before the U.S. Olympic trials began. He did not qualify in the 400 m and he withdrew from the 200 m.[4] In 1989, he placed 2nd in the 400 at the USA Indoor Championship, while at the NCAA Outdoor Championship he led off runner-up Baylor in the 4 x 400 with a time of 43.8 and won the 200 in an American record time of 20.59. Johnson hit his stride in his senior season, winning three of the four major 200 m events on the schedule, taking the 400 m at the USA Indoors Championship, and anchoring several winning relay teams.

Johnson graduated from Baylor in 1990 with a bachelor's degree in business, as the first athlete ever to hold the number one world ranking in both the 200 m and the 400 m.[4] In 1991, he won the world 200 m title in Tokyo by the largest margin of victory (0.33 over Frankie Fredericks) since Jesse Owens won the event in the 1936 Summer Olympics.

Two weeks before the 1992 Summer Olympics began, Johnson and his agent both contracted food poisoning at a restaurant in Spain.[4] Johnson lost both weight and strength. He was the favorite to win the 200 m going into the Olympics, but he could do no better than sixth in his semifinal heat, and failed to reach the 200 m final. Nevertheless, he was able to race as a member of the 4 x 400 m relay team, which won a gold medal and set a new world record time of 2:55.74. Johnson ran the third leg in a time of 44.73.

Johnson celebrating victory in SydneyIn 1996, Johnson ran 19.66 seconds in the 200 m at the U.S. Olympic Trials, breaking Pietro Mennea's record of 19.72 seconds, which had stood for 17 years. With that performance he qualified to run at the 1996 Summer Olympics in Atlanta and prepared to attempt to win both the 200 meters and 400 meters events, a feat never before achieved by a male athlete.[4] (Two women have won Olympic gold medals in both races in the same year: Valerie Brisco-Hooks in the 1984 Summer Olympics in Los Angeles, and Marie-José Pérec, in the same 1996 Olympics in Atlanta.)

Johnson entered the Olympic finals donning a custom-designed pair of golden-colored Nike racing spikes made with Zytel, causing him to be nicknamed "The Man With the Golden Shoes." Sources differ on the exact weight of these shoes; the manufacturer of the spikes claims they weighed 3 ounces (85 g) each,[5] while other sources state each shoe weighed about 94 grams (3.3 oz).[6] The left shoe was a US size 10.5 while the right shoe was a US size 11, to account for Johnson's shorter left foot.[5]

On July 29, Johnson easily captured the 400 m Olympic title with an Olympic Record time of 43.49 seconds, almost one full second ahead of silver medalist Roger Black of Great Britain. At the 200 m final on August 1, Johnson ran the opening 100 meters in 10.12 seconds and finished the race in a world record time of 19.32 seconds, breaking by more than three tenths of a second the previous record he had set in the U.S. Olympic Trials, on the same track one month earlier—the largest improvement ever on a 200 m world record. Some commentators compared the performance to Bob Beamon's record-shattering long jump at the 1968 Summer Olympics in Mexico City.[2]

After the 1996 season ended, Johnson received the James E. Sullivan Award as the top amateur athlete in any sport in the United States,[7] and was named ABC's Wide World of Sports Athlete of the Year. In August, HarperCollins published his biographical/motivational book, Slaying the Dragon: How to Turn Your Small Steps to Great Feats.

Johnson's gold shoesIn 1997 Johnson began appearing in Nike television advertisements in which he was billed as "the world's fastest man" as a result of his 200 m world record.[8] This was despite the fact that the 100 metres world record holder, at the time Donovan Bailey (Canada), was typically given that unofficial title, but Johnson's clocking of 19.32s (10.35 m/s) en route to breaking the 200 metre world record at the 1996 Olympics led many to consider him the fastest man in the world.

In a much hyped competition in June 1997, he raced against Donovan Bailey in a 150-metre (164 yd) race at the Rogers Centre (then SkyDome) in Toronto. The event was unsanctioned, and its unique course consisted of 75 metres of curved track and a 75 metre straight. The race was billed as a competition for the title of "World's Fastest Man." However, Johnson failed to live up to expectations when he pulled up around the 100 metre mark, ostensibly having injured his hamstring.[8] Bailey won the race and the $1.5 million prize that came with the victory, Johnson received $500,000. During the same year, Johnson won his third 400 m world title in Athens. The IAAF invented a new policy of giving a "bye" to the defending champions essentially to allow Johnson to compete in the IAAF World Championships that year, because Johnson was unable to qualify the conventional method (by competing in the USA Outdoor Track and Field Championships) due to his injury from the race.[9]

Johnson was plagued by injury in 1999, and his following season was troubled with two injury scares that limited him to just four 400 m races before the 1999 World Championships in Seville. Were it not for an IAAF policy that allowed automatic entry to defending champions, he could not have raced in Seville since he failed to compete in the U.S. trials due to his injury. He recovered and won his fourth 400 meter world title with a new world record time of 43.18 seconds.

After qualifying for the 2000 Summer Olympics in the 400 m at the U.S. Olympic Trials, Johnson injured himself in the 200 m final while racing in a highly anticipated matchup against the 100 m and 200 m world champion, Maurice Greene. The injury prevented a defense of his 200 m Olympic title.

Johnson ended his career at the 2000 Summer Olympics by winning gold medal in the 400m, which brought his total number of Olympic gold medals to four. By winning the 400m, he earned the distinction of being the oldest gold medalist at any track event shorter than 5000 m in Olympic history. He would have won an additional medal as the anchor of the United States, 4x400 relay team along with Alvin Harrison, Antonio Pettigrew, and Calvin Harrison, which originally won the gold medal. On July 18, 2004, the International Association of Athletics Federations (IAAF) ruled that Jerome Young was ineligible to compete in Sydney and annulled all his past results, including those achieved as part of relay teams. Young had competed for the USA team in the heats and semi-final of this event. Therefore, the United States team was stripped of the gold medal and Nigeria, Jamaica, and the Bahamas were moved up one position each.[12] On July 22, 2005, the Court of Arbitration for Sport (CAS) overturned this decision and restored the original finish order of the race.[13] Then on June 2008, Antonio Pettigrew "admitted in court he cheated to win" by using banned performance-enhancing substances, and agreed to return his gold medal.[14] Johnson announced that he would return his own gold medal, won as part of the relay team with Pettigrew. Johnson stated that he felt "cheated, betrayed and let down" by what Pettigrew had done at the Games.[15] Both of the Harrison twins on the relay team have subsequently received bans for doping offenses.

Since retiring from competitive track, Johnson has worked as a television pundit, often for the BBC in the United Kingdom, where he also writes a column for the Daily Telegraph. His sport performance company, Michael Johnson Performance, located in McKinney, Texas, trains youth athletes ages 10 to 18 and professional athletes in all sports in a state of the art training complex[17]. Michael Johnson Performance is the Official Training Partner of the Dallas Cowboys as well as the official training center of the Dallas Stars and FC Dallas. His sport management company, Ultimate Performance, serves as the agent for track and field athletes including Jeremy Wariner, who won the gold medal in the 400 m at the 2004 Summer Olympics in Athens. Wariner, like Johnson, ran at Baylor University for coach Clyde Hart. In 2007 Johnson opened the Michael Johnson Performance Center in McKinney, Texas where he and his staff train many professional and youth athletes in all sports. He was elected to the United States Track and Field Hall of Fame in 2004, where his 200 m performance at the 1996 Olympics was named the greatest track and field moment of the last 25 years.[2]

In June 2008, Johnson voluntarily returned the 4 x 400 m relay gold medal he earned in the 2000 Olympics after Antonio Pettigrew, who ran the second leg, admitted he took performance enhancing drugs between 1997 and 2001.[18] Pettigrew made his admission while giving testimony in the trial of coach Trevor Graham for his role in the BALCO scandal. On August 2, 2008, the International Olympic Committee stripped the gold medal from the U.S. men's 4x400-meter relay team.[10] Three of the four runners in the event final, including Pettigrew and twins Alvin and Calvin Harrison, and preliminary round runner Jerome Young, all have admitted or tested positive for performance enhancing drugs.[10] Only Johnson and Angelo Taylor, who also ran in preliminary rounds, were not implicated.[10] Johnson had already returned his medal because, as he said, he felt the medal was not won fairly.[10]

Michael Johnson appeared as a contestant on NBC's 9th season of The Celebrity Apprentice (2010), but exited the show due to a personal issue, on the fifth episode of the season first airing on April 11, 2010, thereby placing 10th.

Johnson currently lives in San Rafael, California, with his wife Armine and his son Sebastian (born 2000).[2]

US - Fastest time ever run on United States soil