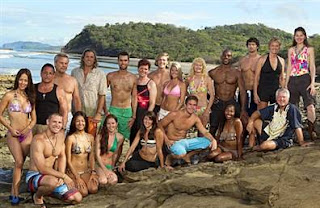 There are many things you can call Fox NFL sports analyst and coaching legend Jimmy Johnson but "wimp" is not one of them.

When two blocked arteries prevented him from competing on his favorite TV show, CBS' "Survivor," three years ago, Johnson underwent heart surgery, lost 30 pounds, cut his cholesterol level in half and applied again. The network couldn't resist and offered him a slot on "Survivor: Nicaragua," which premieres Wednesday at 8 p.m. (Yes, that's a new night for the granddaddy of reality TV shows).

The coach behind back-to-back Super Bowl championships for the Dallas Cowboys is not the first NFL-er to rough it in the "Survivor" jungle — retired quarterback Gary Hogeboom made it to Day 30 in Guatemala five years ago — but Johnson is definitely the game's first bona fide celebrity. His celebrated status only meant that he arrived on a Nicaraguan beach with a huge target on his back, or his famous perfect head of hair.

COMMENTARY
As "Survivor" begins its 21st season and second decade on television, the game heads to Nicaragua. There, it will adopt a conquistador theme and once again subtly reinvent itself by both organizing its tribes by age and introducing a brand-new twist.

After reuniting all-star players last season, "Survivor" will have only regular people — at least until next season, when two of last season's familiar cast members return to battle one another. Again.

"Survivor: Nicaragua" does have several possibly recognizable cast members, who range from a former Miami Dolphins cheerleader (Brenda) to an amputee triathlete (Kelly) to a former NCAA linebacker (Chase).

More Fall TV preview CBS Comedies may not deliver the laughs
We know William Shatner, Will Arnett, Debra Jo Rupp and a host of others starring in the batch of new sitcoms can make us laugh, but the shows?

Heavyweights dominate fall dramas
Reality gets a few twists this fall
What to expect when favorites return
Fall TV premiere schedule
..But it's former Dallas Cowboys coach Jimmy Johnson who's unquestionably the most famous. He's actually a fan of the show, and first unsuccessfully applied years ago. When he reapplied for "Survivor: Gabon," he was almost cast, but didn't pass the medical screening when he learned he had blocked arteries. That "Survivor" medical check "probably saved my life," he told reporters last week. But after being treated and losing weight, he's healthy and ready to compete.

At 67, he's the oldest person on a tribe consisting entirely of people over the age of 40, which will face off against a tribe of younger people, all of whom are 30 or under. "Survivor" has split tribes by age before ("Survivor: Panama"), but they were also split by sex. This division is sharper and should impact the game because challenges can't be entirely about physical strength, which would be an advantage for the younger team

Of course, the football strategist who brought home an NCAA championship for the University of Miami wasted no time in sharing his game plan with the members of his Espada tribe. This is what he told them:

"Listen, no jury's going to award me a million bucks, you know, and my goal is for one of you to win a million bucks. I'm here for the adventure. If I can get an adventure out of this, it accomplishes what I set out to do, then I'm happy."

Did they buy it?

"Now I can't tell you what the results were but I was very happy with the adventure," Johnson said, during a conference call with reporters last week.

Johnson, 67, is the season's oldest competitor, and as such wasn't pleased when host Jeff Probst informed the cast that they would be split into tribes according to age. Those older than 40 lived with Johnson. Those under 30, including a former Miami Dolphins cheerleader, formed the La Flor tribe.

"Initially, I was upset. I wanted those young bucks to carry me," Johnson said, laughing.

Obsessed with the reality show since its 2000 launch, Johnson tried three times to get on "Survivor," which challenges its contestants to "outwit, outplay and outlast" opponents in remote locations, often under austere conditions. The show, explained Johnson, appealed to his sense of adventure and his competitive nature — something that helped him become one of only two head coaches to ever win championships in the NCAA's Division 1-A in college and the NFL.

When he told his Fox Sports colleagues about his "Survivor" plans, Johnson recalled Terry Bradshaw's reaction: "You're going to be eating a bunch of bugs and stuff."

But Fox Sports President David Hill was more encouraging: "Listen, you're 67 years old. I know you want to have a great adventure. Enjoy it, have your great adventure, but don't be stupid."

Hill's counsel turned out to be "the best advice I could ever get because it was grueling, so much more difficult than I ever imagined," Johnson said. "Because of the length of the show, you really can't see every single minute. You can't see the pouring down rain for five straight hours in the middle of the night. And you don't have a watch. You don't know what time it is. You're cold and shivering and it's raining, and you haven't had a minute of sleep the entire night."

"And I thought not having food was one of the more difficult things," he added. "But I actually dealt with that OK. The no sleep was what really got to me. I thought there would be a lot of dead time. But there wasn't any dead time. There was always something to do to build the shelter, to build the fire, to get firewood, to try to catch fish, to try to get any kind of food."

He was also dirtier than he had originally anticipated. As a result, he said he spent a lot of time in his underwear.

What about his famous mane?

"I did have my hair as short as it's been," he said. "I didn't have a mirror, a comb. When you're worried about getting something to eat, and just physically exhausted, the last thought in your mind is how you look."

Although Johnson said he had the time of his life, he would not compete on "Survivor" again because "I pushed it to the limit."

Still, he takes heart in knowing he accomplished something that he says "Mr. Steel Arm" (Bradshaw) could never do. Bradshaw, he said, "wouldn't last one minute" on "Survivor."

"Terry is spoiled," Johnson said. "He's had people cater to him for so long, and Terry's one of my best friends … but you know, Terry would not last. I promise you, he's too accustomed to the good life."
Posted by Unknown at 6:34 AM