ELI, THE WAR DOG IN AFGHANISTAN

When Pfc. Colton Rusk was shot in Afghanistan by a Taliban sniper, a Marine dog named Eli immediately ran to him, guarding the downed Marine against further attack.


Even Marines who rushed to Rusk's side were initially kept at bay by the snarling Labrador, who had been Rusk's inseparable companion through training and then deployment to a dangerous place called the Sangin Valley.

Rusk, 20, a machine gunner and dog handler from the Camp Pendleton-based 3rd Battalion, 5th Marine Regiment, died from his wounds that brutal day in early December.

Out of gratitude for Eli's loyalty to their son, Darrell and Kathy Rusk, with the support of Marine brass, arranged to adopt Eli and take him to their ranch in Orange Grove, Texas, near Corpus Christi.

Such adoptions are unusual, though not unprecedented. Last week, Rusk's family took possession of Eli at Lackland Air Force Base in San Antonio, a major training site for military dogs.

Trainers at Lackland and other sites are busy these days. Dogs are playing an increasing role in the U.S.-led fight in Sangin and neighboring Kandahar province — particularly in ferreting out the buried roadside bombs that are the Taliban's weapon of choice.

"They're Afghanistan's forgotten heroes," said Sgt. ShainNickerson, 24, of Rayland, Ohio, whose German shepherd, Aja, accompanies him on patrol in Sangin. "They're out there every day risking their lives to keep Marines safe."

During a visit with wounded Marines at the military hospital in Bethesda, Md., Marine Commandant Gen. James Amos asked how many had a bomb-sniffing dog with them when they were injured. Half did not.

The Marine Corps is now on a crash program to increase the number of its dogs in Afghanistan. "I'd like a dog with every patrol," Amos said.

The director of the Marine program to provide guard dogs and bomb-sniffing dogs says that despite all the money spent on high-tech methods to find buried roadside bombs — estimated at upwards of $20 billion — well-trained dogs are still the most effective.

"Electronic equipment is great in the laboratory, but out on the battlefield, you can't beat the dogs," said Bill Childress, manager of the Marine Corps working dog program. "The most versatile, mobile piece of equipment we can find is the dog's nose."

That 4-to-1 ratio is considered a sign of success in the grinding fight against improvised explosive devices. Still, 31 Marines have been killed and more than 140 wounded since late September.

In Afghanistan, the Marine Corps has 170 bomb-sniffing dogs, Childress said. The plan is to begin, by late summer, increasing that number to about 280, spread among 20,000 Marines and sailors.

Dogs have deployed with the U.S. military since before the Civil War — a history explained on the website of the nonprofit United States War Dogs Assn. On the site — http://www.uswardogs.org — is a K-9 Wall of Honor listing dogs and handlers who have died during or after combat. Rusk's name has been added to the site.

As in other wars, the bonding between the dogs and their Marine handlers in Afghanistan is the stuff of legend.

When Lance Cpl. William Crouse IV, 22, of Woodruff, S.C., and his dog, Cane, were hit by a roadside bomb just days before Christmas, Crouse's dying words as he was being evacuated by helicopter called for the Navy corpsmen to save his wounded dog.

"Get Cane in the Blackhawk!" Crouse cried out before losing consciousness.

Cane did not survive, becoming the fifth Marine dog to die from roadside bomb blasts in Afghanistan. Four other Marine dogs have died from heat stroke and one from friendly fire.

One of the dogs killed by a roadside blast was a German shepherd named Grief. His handler, Cpl. Al Brenner, 22, of Jackson, N.J., suffered a broken arm, a severed finger and injuries to his legs and groin.

Once he's finished with surgeries and rehabilitation, Brenner wants to reenlist and train dogs for work in Afghanistan. "Without dogs, you're just poking around with a stick, just waiting to get blown up," he said.

For Eli, the ceremony welcoming his return at Lackland Air Force Base was brief but emotional. The 4-year-old Labrador, who did two combat tours in Afghanistan, was declared retired from military service.

On his Facebook page, Colton Rusk wrote of Eli, "Whatever is mine, is his." Rusk's phone calls to his family from Afghanistan were filled with references to the dog. 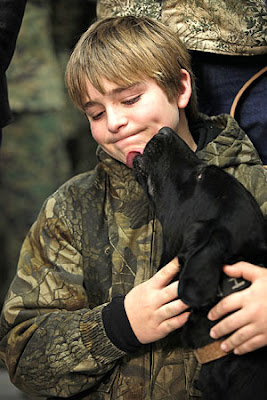 Among the Rusk family's most prized possessions are pictures of Colton and Eli before they deployed to Afghanistan. Kathy Rusk wears a necklace with a picture of the two.

"You're going home," she said with a catch in her voice as she hugged Eli.
Posted by Unknown at 6:03 PM