INDIANAPOLIS (AP)—Rex Ryan is at it again. 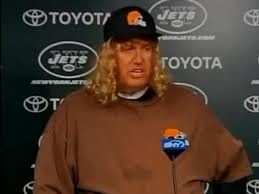 Brimming with confidence after his team reached the AFC championship game the past two seasons, the outspoken New York Jets coach has promised a Super Bowl win next season.

“I guarantee we’ll win it this year.”

The Jets are the only team to play in a conference championship game each of the past two years, something Ryan mentioned more than once while speaking to reporters Thursday at the NFL scouting combine. Ryan said his team made major strides last season, and he believes it is natural to expect the Jets to take the next step.

“I care what our organization believes and what our fans believe,” he said. “If we can improve a little more, then why not us?”

Ryan made headlines when he made the Jets’ divisional playoff game against the Indianapolis Colts a “personal” matchup between himself and Colts quarterback Peyton Manning(notes). The Jets prevailed 17-16. The next week, he pulled out the personal card again, this time calling out New England Patriots coach Bill Belichick, and the Jets won 28-21.

Thursday’s 17-minute session was vintage Ryan. He talked for more than five minutes before taking a question, often drawing laughs from the media.

“Anyone that’s down or feeling bad about themselves, spend a couple hours with him and I promise you’ll laugh a few times,” Tannenbaum said. “He’s a great football coach. There’s a lot been said about his personality, his guarantees, but at the end of the day, we got to judge him by his record. We’re lucky to have him.”

This isn’t the first time Ryan has promised a title. During last season’s training camp, Ryan was asked to sign his team’s logo sticker on the back of ESPN’s tour bus. Instead of just signing his name, the brash Ryan wrote: “Soon to be Champs.”

When asked if such boasts become hollow if the team doesn’t follow through, Ryan became defensive.

“I’m not the smartest guy of all time and the sharpest tack,” he said. “And guarantee? I don’t know. I just know how I feel.”

Ryan added that the team’s 5-3 home record last season was disappointing, and he quipped that their No. 3 defensive ranking wasn’t up to their standards.

“Our fans deserve better, and you know what?” Ryan said. “I think we’re going to figure it out.”

Ryan said he’s not worried about the league’s labor issues, he’s only focused on winning.

“We have a plan for every scenario, and we feel great about our plan,” he said. “I can comfortably say we’re making no excuses. We’re just going to find a way to get it done.”
Posted by Unknown at 5:46 PM