The Magic Of Oz Synopsis 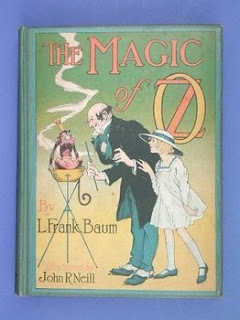 Synopsis:
In this tale of magical intrigue, Ruggedo is once again up to his old tricks, seeking revenge on Ozma and Dorothy and trying to conquer the Emerald City. In his wanderings after being deposed as the Nome King and deprived of all his magical powers, he encounters a young Hyup boy, Kiki Aru, who has learned how to cast transformation spells. Led by Ruggedo, they hatch a wicked plot to enlist the animals of the Gugu Forest to overpower the people of Oz and claim the throne for themselves.
Meanwhile, in the Emerald City preparations are underway for Ozma's birthday. In the search for new and unusual gifts, Trot and Cap't Bill are led by the Glass Cat to the far north of the Munchkin Country in search of the Magic Flower. They become trapped on the island which houses the flower, surely to die if help does not quickly arrive.
While this is happening, Dorothy has determined to give Ozma a Surprise Cake, so named because it is to be filled with twelve dancing monkeys. This quest to find such an entertaining cake filling turns into another great adventure in Oz. In this most enchanting tale, they must deal with the Nome King and Kiki Aru, and find a way to rescue Cap't Bill and Trot.
Posted by Unknown at 8:53 AM