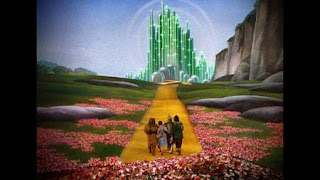 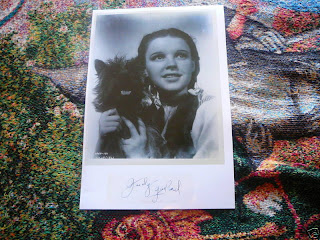 The studio is examining two existing "Wizard of Oz" projects, with an eye toward giving one of them a modern gloss and moving it toward the screen.

One project, called "Oz," currently lives at Warner's New Line label. It's being produced by Temple Hill, which is behind a little franchise called "Twilight," and has a script written by Darren Lemke, a writer on the upcoming "Shrek Forever After."

A second "Wizard of Oz" project, set up at Warners proper, skews a little darker -- it's written by "A History of Violence" screenwriter Josh Olson and focuses on a granddaughter of Dorothy who returns to Oz to fight evil. "Clash of the Titans" producer Basil Iwanyk and his Thunder Road Pictures are behind that one. ("Spawn" creator Todd MacFarlane is potentially involved in a producerial capacity, to give you some idea of the tone.)

While the idea of a new "Wizard of Oz" movie is said to be in the development, let's-bat-this-around stage, it's been advanced seriously enough on the lot that representatives for some of the top directors around Hollywood have been briefed.

The Judy Garland-starring "The Wizard of Oz" from 1939 -- we could give you the refresher on witches, tin men, Dorothy and everyone else, but really, do we need to? -- has been given alternative treatments before. There was the 1978 black-themed film adaptation of the stage play "The Wiz." And of course about six years ago came the Broadway adaptation of Gregory Maguire's "Wicked," an alternative story of girls, witches and Emerald City politics. The property proved a huge stage hit, prompting a film version that's in development at Universal and "Wanted" producer Marc Platt.

Audiences are likely to respond to the idea of a new silver screen "Wizard of Oz" with gusto ("at least the first one was good," said one colleague we told) or with horror, precisely because the original is such a classic.

But for Warners, there's plenty of appeal in trying to take the story of Dorothy & Co. back to the big screen. For one, there's the bonkers $210 million global opening for "Alice," which shows that if you're trying to create a mega-blockbuster, one smart way to do it is to take a title people know and update it for the effects era. And there's a neat symmetry, since the Technicolor version of the classic film did for color in the movies what a lot of people say that "Avatar," "Alice" -- and now, perhaps, "Wizard" -- could do for 3-D in the movies.

With its Harry Potter series drawing to an end, Warners also likes the idea of a franchise, and "Wizard of Oz" and the many books L. Frank Baum wrote featuring many of the same characters (all of which are in the public domain) fit the bill nicely. And let's not forget the property's strong, young female protagonist, hugely in vogue now in the post -Twilight" and -"Alice" eras.

There could still be questions about the project's title (the book's "The Wonderful Wizard of Oz" is in the public domain but the movie's "The Wizard of Oz" is not; it's owned by MGM, whose library is partly owned by Warner Bros.). And then there's the matter of whether filmmakers would make the movie with musical elements, as the original, of course, did. Those questions aside, it could be the moneymaking formula.

Follow the yellow brick road. It's strewn with CGI, tent poles and 3-D. And, of course, a little green.