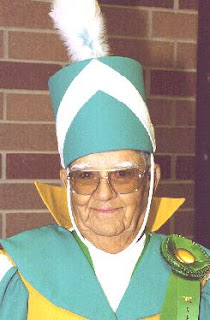 The Associated Press
February 28, 2009
PFLUGERVILLE, Texas - Clarence Swensen, who played a Munchkin soldier in the 1939 classic "The Wizard of Oz," has died. He was 91. Swensen died Wednesday, a funeral home in Pflugerville confirmed. He had being in poor health since suffering a stroke in 2005, the Austin American-Statesman reported. In the late 1930s, Swensen joined The Stanley R. Graham All Midget Circus troupe, which performed at the Texas State Fairgrounds in Dallas. It eventually led to an offer from Metro-Goldwyn-Mayer to play a Munchkin, earning a salary of $700. Swensen had regularly attended Wizard of Oz festivals. He was among seven of the surviving actors who played the inhabitants of Munchkinland present when the Munchkins received a collective star on the Hollywood Walk of Fame in 2007.
Posted by Unknown at 9:01 AM