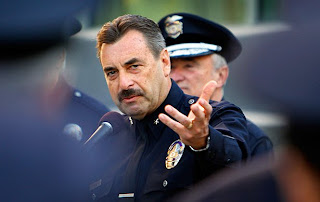 LAPD Chief Charlie Beck: L.A. won't be guided by Arizona immigration rules
April 30, 2010 | 6:32 am
With as many as 100,000 people expected to convene downtown Saturday to rally in support of immigrant rights, Los Angeles Police Chief Charlie Beck went out of his way to make clear that his officers are guided by a different set of rules than the controversial state law recently passed in neighboring Arizona.

“Because of the ongoing issues in Arizona, I wanted to make something perfectly clear,” Beck said. “Special Order 40 is the mandate of this department. …That is how I will police this city as long as I am the chief of police.”

Beck was referring to the agency’s long-standing policy that prohibits officers from initiating contact with someone solely to determine whether he or she is in the country legally. It has drawn the periodic ire of critics who argue for a tougher stance against undocumented immigrants.

Beck and other chiefs before him, however, have said the policy is an important tool, as it encourages illegal immigrants who witness crimes to assist police without fear of being deported.

Arizona’s tough new legislation makes it a state crime to be in Arizona illegally and requires police to check suspects for immigration paperwork.


The legislation also bars people from soliciting work or hiring day laborers off the street.

Anger over the law has inflamed passions on both sides of the immigration debate and caused LAPD officials to increase their predictions for the number of people expected to turnout for the annual demonstration.
MARK SHAPIRO RESPONSE POSTED IN LOS ANGELES TIMES
NO wonder California is in a mess..Now you got the police, who are supposed to uphold laws, ignore federal law. I guess he worries about his career than what he was hired for. Why dont the police ignore other laws like speeding, marijuana, theft, murder, etc. All the Arizona law is , is federal law, which means the police have to HAVE A REASON for stopping someone and only if the person turns out to be here illegally, then the police HAVE A FEDERAL RIGHT TO UPHOLD THE LAW. Last time I checked, there is a procedure in place for a person wanting to be in this country but it appears that procedure doesnt mean anything and the law APPLIES TO ANYONE HERE ILLEGALLY, NOT JUST SOMEONE FROM MEXICO. The united states, during world war two, turned back Jewish Refugees from Germany on a ship because they were considered illegal immigrants. The ship then went to cuba who turned them down and then had to go back go Germany, where all were sent to a concentration camp, to their death.The ones who will be protesting on cinco de mayo will be those who are breaking the law, simple as that, and who want all the benefits without paying into it. Go to Mexico and you will see you have no rights and even cannot own land.
Posted by: MARK SHAPIRO | April 30, 2010 at 07:08 AM
Posted by Unknown at 7:11 AM