JOHN LENNON TOILET UP FOR AUCTION THEN SELLS FOR $14,700 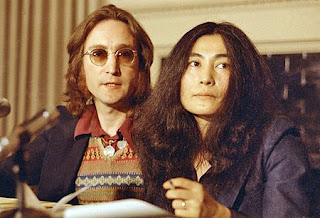 A porcelain toilet used by John Lennon between 1969 and 1972 is among the 303 lots going up for auction Saturday at the 33rd annual Beatle Week Festival in Liverpool.

"The toilet might be worth something, and it might not, but it is certainly one of the more unusual items we've sold," auction organizer Steven Bailey told the Daily Telegraph.

Likely having more significance to collectors: a rare mono copy -- as in, not stereo -- of the 1968 release "Two Virgins," recorded by Lennon with Yoko Ono, and featuring full frontal and backside nudity ...

... of the couple on the front and back of the album, a feature that required the record to be sold in a brown paper wrapper back in the day.
Another item of interest to non-collectors: A harmonica that once belonged to Julian Lennon is up for bid. According to the auction catalog notes, John gave it to the seller's father, begging him, "Take it home, please, I'll tell Julian it's lost, he drives me potty with it."

LONDON — Lennon, who was murdered in New York in 1980, had the porcelain lavatory removed from Tittenhurst Park in Berkshire, southern England, where he lived from 1969 to 1971, and replaced with a new one.

The builders who took away the white and blue lavatory were told to "put some flowers in it or something," according to the auction catalog.

Builder John Hancock stored it in his shed for 40 years until he died recently and the lavatory was sent for sale, British media reports said.


The toilet was among Beatles memorabilia sold at auction as part of the Beatle week festival in Liverpool, the group's native city in northwest England. The pre-auction estimate was 750 to 1,000 pounds.

Anne-Marie Trace, who works at the Beatles Shop in Liverpool which organized the sale, said the high price paid had taken the organizers by surprise.

"I think it's the most unusual item we've ever had in our auction," she told Reuters.

The buyer was not identified but Trace said it was likely it was "going overseas."

With this in mind, how much would the toilet paper be worth. Elvis Presley's barber did well by selling locks of his hair.
Posted by Unknown at 7:25 AM