THOMAS EDISON AND THE PHONOGRAPH 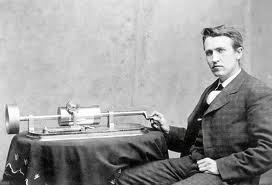 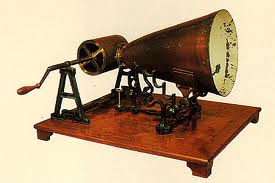 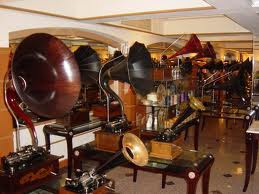 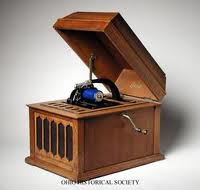 The phonograph was developed as a result of Thomas Edison's work on two other inventions, the telegraph and the telephone. In 1877, Edison was working on a machine that would transcribe telegraphic messages through indentations on paper tape, which could later be sent over the telegraph repeatedly. This development led Edison to speculate that a telephone message could also be recorded in a similar fashion. He experimented with a diaphragm which had an embossing point and was held against rapidly-moving paraffin paper. The speaking vibrations made indentations in the paper. Edison later changed the paper to a metal cylinder with tin foil wrapped around it. The machine had two diaphragm-and-needle units, one for recording, and one for playback. When one would speak into a mouthpiece, the sound vibrations would be indented onto the cylinder by the recording needle in a vertical (or hill and dale) groove pattern. Edison gave a sketch of the machine to his mechanic, John Kreusi, to build, which Kreusi supposedly did within 30 hours. Edison immediately tested the machine by speaking the nursery rhyme into the mouthpiece, "Mary had a little lamb." To his amazement, the machine played his words back to him.
Posted by Unknown at 9:26 AM