OFF TO SEE THE MUNCHKINS

About 700 patrons visited Hollywood Palms on Saturday to watch "The Wizard of Oz" and meet three of the original Munchkins.


new Jerry Maren, Margaret Pellegrini and Karl Slover stand behind Ted Bulthaup, president of Hollywood Palms and Blvd. Bulthaup was a major force in getting the Munchkins a star on the Hollywood Walk of hss-Naperville, where three of the four surviving actors who played Munchkins in The Wizard of Oz made an appearance.

"It's a once-in-a-lifetime experience for us to meet them," Finnegan said. "We don't know how long they'll be around."

Karl Slover, 92, Jerry Maren, 90, and Margaret Pellegrini, 88, worked Saturday's crowd for hours, mingling with fans and moviegoers. The three Munchkins signed autographs and photos for attendees of all ages.

Although meet-and-greets are nothing new for the trio, they still enjoy interacting with fans of The Wizard of Oz. Slover especially enjoys his trips to Naperville.

"I think it is wonderful seeing a place really in love with all of this," Slover said. "I enjoy doing this type of stuff."

The Munchkins were in Naperville because Hollywood Palms was showing The Wizard of Oz on its largest screen. About 700 people bought tickets to attend the theater's four showings of the 1939 classic.

Many of the moviegoers came with family members stretching three generations. Dianne Bastian attended the movie with her daughter, Michelle, and granddaughter, Angelina Harmony. Bastian, who lives in Riverwoods, was born two years after the release of The Wizard of Oz.

"This has been a movie through my lifetime," Bastian said. "I'm thrilled to share these moments through the generations."

Elizabeth Maren, Jerry's wife, said she sees the most joy from the young children who attend the meet-and-greets. She said the children know all the words to the songs and can repeat moments of dialogue from memory.

The trip to Naperville also gave Pellegrini the chance to meet new family members. The Munchkin has two children, but a large number of grandchildren and great-grandchildren.

"I just saw a couple of nephews who I've never seen before," Pellegrini said. "It was exciting. At least I learned about who died and who's still alive."

Maeve Deloughery brought her 7-year-old and 6-year-old children to meet the Munchkins and see the movie. She said the meet-and-greet was the main attraction of the day, and she found it amazing that some of the original cast members are still alive.

"It puts it all in perspective," Deloughery said.

Not everyone who attended the event waited to meet the cast members. Kris Kaminshi, of Batavia, didn't want to stand in the additional line with her 5-year-old twins. But Kaminshi, her children and her mother were still excited for the chance to see The Wizard of Oz in a movie theater.

"I've only seen it on TV," said Marilyn Barry, Kaminshi's mother. "This is going to be a real fun experience." 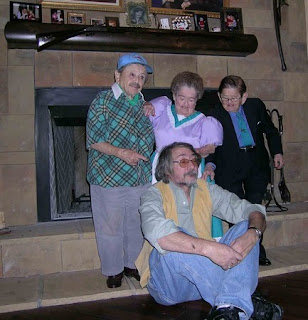 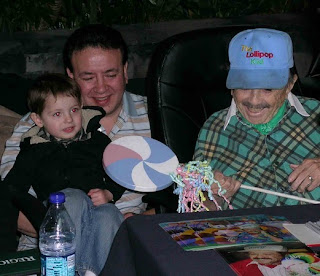 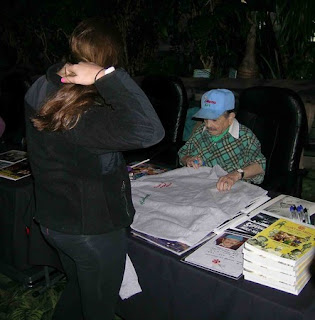 2. MARGARET PELLEGRIRI . LADY MUNCHKIN (I CAN'T MAKE OUT THE SPELLING)

I WENT EVERY YEAR SINCE THEY STARTED THE WIZARD OF OZ WEEKEND IN CHITTENANGO, NY. I LIVE 7 MILE AWAY. THEY WOULD AUTOGRAPH ANYTHING WHEN THEY FIRST STARTED COMING TO CHITTENANGO. I HAVE SEVERAL THINGS WITH THEIR AUTOGRAPHS ON THEM. THERE IS ONLY 2 THAT COME NOW. ALL THE OTHERS ARE EITHER TOO OLD OR DEAD. MARGARET WAS THE YOUNGEST. 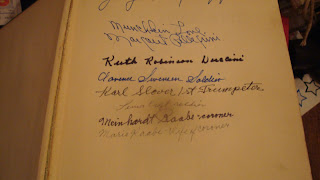 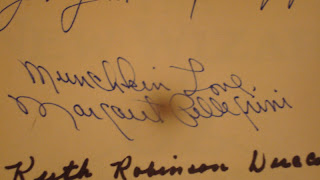