Newspaper article by Dwyre stating that Zenyatta had her nose in front near the finish line and then Blame came back on to win by a nose..Look for yourself and no matter how many times you view the finish, Zenyatta NEVER got her nose in front and lost by a neck and not by three inches as this writer reported and did so only to enhance the image of Zenyatta. 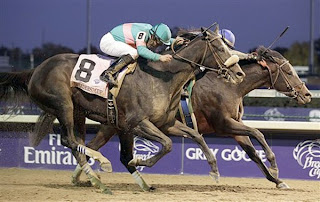 AS THE TIMES WRITER FALSELY REPORTS,,THAT IS NOT A NOSE FINISH BUT A NECK

The 6-year-old mare loses by a nose to Blame, but she shouldn't be forgotten in horse-of-the-year voting.

The leaves are off the trees in Kentucky, and the bloom is off the rose in horse racing.

Zenyatta lost. Everybody's equine darling gave it her all and came within three inches of the storybook finish, the 20-0 record.

It would have been a perfect retirement package for this 6-year-old marvel. But 19-1, plus the memory of how hard she tried, how close she came and how much she did for a sport that needed her so badly, still deserves a pretty nice pension.

Get sports scores and updates, delivered to your mobile phone. Text SPORTS to 52669.

When she came charging down the home stretch of fabled Churchill Downs, a chill in the air and the last glimmer of daylight about to disappear, it looked as if she would do it one more time. She had won this Breeders' Cup Classic last year, also against the best horses in the world, also the same way.

Why not once more? Didn't all those fans who stood all day at the paddock fence, holding their Girl Power signs and waiting for their moment to snap her picture, deserve this? Shouldn't a higher power have willed her past the spectacular colt, Blame, in those last 10 yards? Wasn't it time that horse racing, a sport in dire need of more front-page pictures and more moments on SportsCenter, got a break?

There was a crowd of 72,739, waiting to explode. The Twin Spires would have shivered and the Richter scale might have read a 2.3. As the huge mare streaked down the home stretch, after staying way behind as usual and giving everybody a heart attack by starting her dash at the last conceivable moment, it felt as if all 72,739 were sprinters in starting blocks.

On your mark, get set, explode …

But this time, she didn't make it. One camera angle showed that she actually caught Blame a few steps from the wire, but then Garrett Gomez got the last bob and Zenyatta was beaten. One can only imagine how confused she must have been when they led her off to the barns, not the victory circle.

On Saturday at Churchill Downs, a pitcher shut down Joe DiMaggio in Game No. 57. Casey was at the bat and struck out again. Edwin Moses hit the last hurdle, Rocky Marciano got caught with a left uppercut and went down.

For the Zenyatta connections, the thrill of 19 previous victories will not immediately ease the agony of a three-inch defeat. Perspective will come in a few days, maybe weeks. This was a horse race, not a vote on civil rights or taxes, nor a rescue of Chilean miners.

An attempt at perspective came in their first wave of interviews immediately afterward.

Trainer John Shirreffs said, "I was just happy with everything Zenyatta has done. She ran her heart out."

Co-owner Jerry Moss said, "I thought she'd get there. She just missed. She lost to a great horse."

Moss' wife, co-owner Ann, had the most creative reaction.

"I was hoping she'd stick her tongue out," Ann Moss said.

But later, when asked to come for a formal interview, the Zenyatta connections declined.

Jockey Mike Smith, along for the ride in 16 of her 19 trophy dashes down the home stretch, took it the hardest, blaming himself for starting her too late on her final run. He got teary-eyed during his post-race news conference, and he didn't need to.

if one is looking for blame,, mike smith is correct and honest for simply look at the video when he was hitting zenyatta left handed forcing her to the middle of the track losing two to three lengths until he hit her right handed again to get her to go in again and by that time , it was too late..zenyatta clearly was the best horse in the race and I congratulate smith on his honesty.
Posted by Unknown at 10:24 AM