We start with the baseline look at Walton's numbers. Walton is averaging just under 9 minutes a game, and in those 9 minutes, he's scoring 1.7 points per game on a heroically bad 36% eFG (or if you prefer 37.6% TS). He is near his career averages for rebounds, assists, and turnovers per 36 minutes, so his poor play is really just a matter of being a bad shooter. How bad a shooter? Only one player in the league has shot worse from the field in more minutes than Luke, Jared Jeffries, coming through with a stunningly terrible 30.9% TS in 511 total minutes on the season (Luke has played 452). Of the other players below Luke, only two have cracked the 200 minute mark on the season. 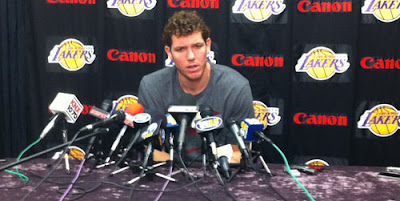 Luke Walton at news conference explaining his 1.7 points per game average to the media

And how about those wonderful catchall stats, those bastions of player comparison, PER and Win Shares? Walton rates a PER of 5.7. A 15 PER is considered average, and a 25 PER is considered a borderline MVP candidate, so it could aptly be said that Luke Walton is a borderline MVP candidate of suck. However, there are plenty of players playing semi-significant minutes who are worse by that measure. The leader in the clubhouse is Jarron Collins, who has a PER of 1.6 in 181 total minutes played. Or, if you don't think he's played enough minutes to qualify, Quinton Ross and Stephen Graham (both of the New Jersey Nets, by the way) have PERs of 3.7 and 3.9 in 353 and 819 minutes respectively. Just based on sheer number of minutes played, let's give Graham the nod as the worst player in the league by PER's measure.
Posted by Unknown at 8:46 AM