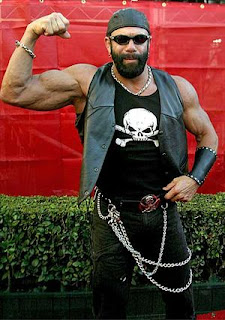 Macho Man Randy Savage died Friday morning in Florida after reportedly suffering a heart attack at the wheel, crossing the median and crashing his Jeep Wrangler into a tree. The former pro wrestling star was 58.

Second wife Lynn Payne was a passenger during the crash and suffered minor injuries, Florida Highway Patrol told TMZ, which first reported the news. Wrestler Lanny Poffo confirmed the death of his brother, born Randall Mario Poffo, to the website.

[Updated, 12:05 p.m.: Lanny Poffo told TMZ that Randy had suffered a heart attack; the highway patrol report says Savage "lost control for unknown reasons," according to the St. Petersberg Times, and that a heart attack could not be confirmed until an autopsy was done.]

The couple, married last May, recently celebrated their one-year anniversary. Savage died of his injuries at Largo Medical Center in Largo, Fla. Both were reportedly wearing seatbelts.

"He had so much life in his eyes & in his spirit, I just pray that he's happy and in a better place and we miss him," fellow wrestler Hulk Hogan said Friday on Twitter. "We miss him a lot. I feel horrible about the ten years of having no communication. This was a tough one."

"I feel so fortunate that I had a second chance to marry my first love, here where it all began," Savage said a year ago, after his Lido Beach wedding to Payne, whom he'd met there decades before.

He was back on the wrestling scene in a fashion with the release of a wrestling all-stars video game early this year, promoting the game in a video embedded below.

Savage, who announced the release of a Macho Man action figure -- not his first -- at Comic-Con in July 2010, was known for his catch phrase "Ooooooh yeaahhh" and his affiliation with Slim Jim snacks. See the Comic-Con announcement below.

In addition to his pro wrestling success -- including multiple reigns as WWE (then WWF) and WCW champion -- Savage appeared as Bone Saw McGraw, the wrestler Tobey Maguire's Peter Parker faces off with in "Spider-Man" (2002), among other occasional acting gigs, and released a rap album, "Be a Man" (2003).

As Randy Poffo, he played minor league baseball in the St. Louis Cardinals and Cincinnatti Reds systems in the early 1970s. Chicago White Sox manager Ozzie Guillen was also among those expressing condolences Friday.
Posted by Unknown at 1:04 PM