50-1 MINE THAT BIRD WINS KENTUCKY DERBY 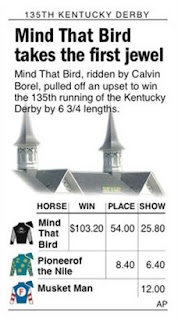 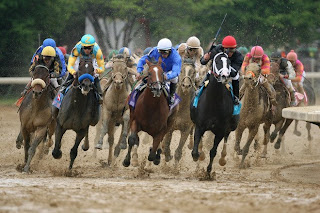 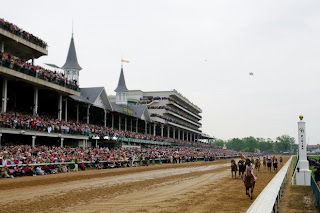 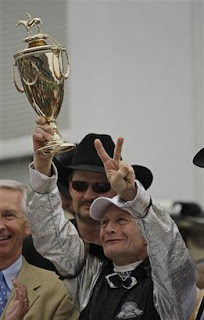 AP - Apr 30, 7:50 am EDT 1 of 99 Horse Racing Gallery LOUISVILLE, Ky. (AP)—Mine That Bird dug up a miracle, stunning the field to win the Kentucky Derby with a dynamic stretch run through the mud Saturday at Churchill Downs.

The 3-year-old gelding and jockey Calvin Borel found room along the rail deep in the stretch then pulled away for a 6 3/4 -length win to give the 50-1 long shot one of the biggest upsets in the 135-year history of the race.

It was the largest margin of victory in the Derby since Assault won by eight lengths in 1946. Barbaro won in 2006 by 6 1/2 lengths.

The Derby win was the second in three years for Borel, who used a similar stretch run to send Street Sense to the winner’s circle in 2007.

“Calvin did a super job,” winning trainer Chip Woolley said. “I just can’t say enough about the way things went for us. Calvin picks a spot, every thing fell together. We were really lucky to get through there.”

Mine That Bird joins Giacomo, who won in 2005, as one of the most unlikely victors in the Run for the Roses.

Pioneerof the Nile held off Musket Man for second, but neither was a match for the unheralded horse from New Mexico, who became the ninth gelding to win the Derby and just the second in the last 80 years. Funny Cide won in 2003.

Friesan Fire, who became the favorite after I Want Revenge was scratched earlier in the day, finished 18th in the 19-horse field.

Borel thrust his right arm in triumph as he crossed the wire, and Woolley hobbled to hoist the trophy. The trainer from New Mexico broke his right leg in a motorcycle accident over the winter and drove his stable’s star 21 hours to Churchill Downs.

“They’ll know who I am now,” Woolley said from underneath his massive black cowboy hat.

Trainer Bennie Woolley Jr. hitched Mine That Bird to the back of his pickup and drove to the Kentucky Derby from New Mexico. With an inspired ride on the rail from Calvin Borel, it all added up to one of the greatest upsets in 135 years of America’s most famous horse race.

“Those cowboys,” trainer Bob Baffert said, “they came with a good horse.”

Mine That Bird went off at 50-1 odds Saturday, but that was only one measure of how little attention he garnered before pulling away in the stretch to score a 6 3/4 -length victory at Churchill Downs, the second-biggest stunner in Derby history. The margin was the largest since Assault won by eight lengths in 1946.

“All I asked him was to lay the horse back and be patient, and he did that magically,” Woolley said.

That should have been no surprise since Borel used the same rail-hugging ride to win the Derby two years ago with Street Sense.

“I learned by Street Sense being so patient with these 3-year-olds,” Borel said. “They can only go so fast, so far. When I hollered at him, he just went on.”

Pioneerof the Nile was second. Musket Man was another nose back in third.

Most of the pre-race storylines belonged to high-profile trainers like Baffert, who was recently elected to the Hall of Fame and whose colt Pioneerof the Nile was making his debut on dirt after racing on synthetic surfaces out West.

But the cowboy in the dark glasses and big black hat outfoxed Baffert and the likes of Bill Mott (12th with Hold Me Back), Nick Zito (17th with Nowhere to Hide), and D. Wayne Lukas, last with Flying Private.

Woolley was no kinder to sentimental favorites Larry Jones and Tom McCarthy, two home-state trainers whose feel-good stories also dominated the headlines for most of the week.

Jones’ horse, Friesan Fire, the 7-2 wagering favorite of 153,563 fans, was 18th in the 19-horse field. A year ago, Jones lost his filly Eight Belles, who ran a gallant second to Big Brown, then broke down after the finish line and had to be euthanized on the track.

Jones blamed Friesan Fire’s poor showing on the muddy track and getting clipped on one of his legs out of the gate, drawing blood. The trainer said it may have jeopardized his chance of running in the May 16 Preakness.

“Beating one horse was better than running second and what happened last year,” he said.

McCarthy, a 75-year-old retired high school principal who paid only $20,000 for General Quarters, captured the public’s imagination with his one-horse stable. But the horse finished 10th and never found his footing in the slop.

“He came back to the barn choking in mud,” McCarthy said. “One eye was completely packed shut and his one nostril was completely shut with mud. He coughed twice and it popped out.”

Also leaving empty-handed was Sheik Mohammed al Maktoum of Dubai, whose duo of Regal Ransom and Desert Party failed to achieve his goal of winning the Derby after nearly a decade and millions of dollars spent trying.

AP - May 2, 7:40 pm EDT
The majority of the field prepped for the Derby on dirt tracks, although other horses were trying it for the first time after coming off synthetic surfaces.

Earlier, I Want Revenge became the first morning-line favorite to be scratched on Derby Day after inflammation was detected in the colt’s left front ankle. The injury wasn’t believed to be career-threatening but worrisome enough to prompt trainer Jeff Mullins and owner David Lanzman to withdraw.

Mine That Bird got squeezed coming out of the starting gate, but Borel took a firm hold and wrestled the horse to the rail while they were in last place.

They were 12th and going strong with a quarter mile to go, after working their way around Atomic Rain. Borel quickly angled Mine That Bird back to the inside with three-sixteenths to go and shot the gelding through a tight spot approaching the eighth pole.

Once free, Mine That Bird quickly accelerated toward an improbable victory.

“I salute Calvin for his terrific ride,” said trainer Todd Pletcher, whose Derby losing streak extended to 0-of-24. “It’s an amazing story. It just shows you how special this race is. Anything can happen.”

“I’m feeling like I never have before,” he said. “I was just blown away.”

He met up with a tearful Borel, whose mind was on his parents and paid them tribute by crossing the finish line with his whip pointing to the overcast sky.

“If they could only be here to see what I accomplish in my life,” he said, his voice choking.

Borel became the first jockey since 1993 to complete the Oaks-Derby double, having ridden Rachel Alexandra to an eye-popping 20-length victory Friday.

Woolley joined a parade of trainers who won with their first Derby starter, the sixth time in seven years it has happened.

Mine That Bird, the son of 2004 Belmont Stakes winner Birdstone, became the ninth gelding to win the Derby and just the second in the last 80 years, joining 2003 winner Funny Cide.
Posted by Unknown at 5:28 PM