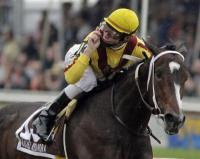 The horse becomes the first filly to win the race in 85 years.
By Bill Finley

The filly did it. Rachel Alexandra won the Preakness.

Rachel Alexandra, who was pitted against 12 of the best males in the sport, had the class, talent and speed to do what no filly had done in 85 years. Holding off Mine That Bird's late run, Rachel Alexandra won Saturday's middle leg of the Triple Crown by one length.

"I think she's the greatest horse in the country," said the winning jockey Calvin Borel, who took off the Kentucky Derby Mind That Bird so he could stick with Rachel Alexandra. "That's colts, fillies, boys, whatever. She's an amazing filly."

Adding to the magnitude of Rachel Alexandra's win, Borel contended that she didn't run her best. The veteran rider said his mount didn't care for the Pimlico racing surface and likely would have done even better had she had.

"My filly was kind of struggling in the last quarter mile," he said. "She went to reach out and the ground was breaking out from underneath her."

Borel's decision to bail on Mine That Bird, which made him the first

"I would have taken a lot of heat had she not run well," said Jackson, who also teamed with Asmussen to win the 2007 Preakness with Curlin.

Rachel Alexandra broke sharply from the gate and headed toward the lead under Borel. She appeared to be going comfortably, but Big Drama stuck to her flank while racing on the inside. By the top of the Pimlico stretch, Big Drama was done, and Rachel Alexandra was about to open up by four lengths on the field.

But Mine That Bird, the stunning winner of the Kentucky Derby at odds of 50-1, was in the midst of the same move that carried him to victory two weeks earlier at Churchill Downs. Sitting last early under the replacement rider Mike Smith, he started to pick up steam on the far turn and was picking off horses one by one.

After getting out of a brief traffic jam on the far turn, Mine That Bird had a clear run and just one horse to catch. He had no excuses. Rachel Alexandra was simply the better horse.

"I thought I did," Smith said when asked if he thought he had a chance to catch the winner. "Hats off to her. She's a talented, talented mare. Anyone else would've caved in."

For Mine That Bird, there was honor in defeat. Many dismissed his win in the Kentucky Derby as an inexplicable fluke. Saturday, he ran every bit as well.

"I'm thrilled to death with the race my little horse ran," said the trainer Chip Woolley. "Everything was going according to Hoyle, until the turn when he was fanned a little wide. I thought we had a chance at the eighth-pole. But you have to give that filly credit."

Rachel Alexandra, who became the fifth filly to win the Preakness, paid $5.60 for a $2 win bet. She covered the mile-and-three-sixteenths in 1:55.08 over a track that was listed as fast despite a shower that hit Baltimore about 15 minutes before the race.

Musket Man, third in the Kentucky Derby, finished third again, a half-length behind Mine That Bird.

"My horse ran well, but we got beat by a great one," said Derek Ryan, the trainer of Musket Man. "She's a filly for the ages."

The Kentucky Derby runner-up Pioneerof the Nile, the second choice in the wagering Saturday, was the primary disappointment. He finished 11th.

The Triple Crown tour heads to Belmont Park for the Belmont Stakes, where a rematch between Mine That Bird and Rachel Alexandra could be the main attraction. The connections of Mine That Bird have already committed to the June 6 race. Jackson was less definite, saying no decision would be made until he and Asmussen were able to see how she came out of the race.

No filly has ever won two legs of the Triple Crown.
Posted by Unknown at 2:35 AM