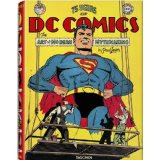 Over the past several decades, my bookshelf has filled up with publications that cover the long history of the Comic Book and the big two publishers. This newest tribute to the history of DC Comics, '75 Years of DC Comics: The Art of Modern Mythmaking', quite literally, crushes them all. It will also crush your lap and test your strength if you try to hold it up to read it! This tomb is MASSIVE! Nearly sixteen inches tall, 12 inches wide, 3 inches thick and weighs a metric ton! Well, perhaps not quite that much but it will feel like it after holding it for a short period of time!


The hardcover comes shrink-wrapped in a sturdy cardboard slipcase, matching the artwork on the wraparound cover. The box even conveniently comes with a side handle. Although you will need both hands to carry this monster around.

Yes, this is a very pricey book. As one who has a collection of like publications, I can assure you this book is worth every penny. Inside, the rarity of images and artwork along with the high production values, the quality of the print and page stock is well above the norm. For example, for each era of comic history (The Golden Age, Silver Age, Bronze Age, etc), that chapter begins with a two page spread highlighting the name of the era with thick, high gloss, corresponding color foil pages. Each era also includes a four page, pull-open timeline highlighting key events in both the fictional DC Comic universe and the real world of the comic book industry.

The author, Paul Levitz, a man who has spent his entire adult life working for the company, first as a young freelance writer in the 1970s, then later as publisher until 2010, was the right choice to chronicle this retrospective. If he had not seen it all, he certainly heard it all. I really enjoy how the text, the ongoing historical telling throughout the book is laid out for the reader...a grand intro for each era then as one or two paragraph antidotes accompanying the images or photos. For example, here's a cover of a very significant Green Lantern issue in the 1970s and why it is so considered, while next to it will be a short bio and tribute to a particular creator who worked on said issue. In fact, the creator tributes in this book are part of the true joys of reading through DC's history. That list is long and deep and for once a book of this kind goes to great lengths to credit more than just the typical top 20 or so names from the company's storied past. Beyond the names most adult fans of the genre already know about (The Bob Kanes, Jack Kirbys and Carmine Infantinoes) we find tributes to writers and artists less well known but just as important to the success of DC Comics and the Comic Book industry in general over the decades (Will Eisner, Sheldon Mayer, Jack Cole, Mort Weisinger, Curt Swan, Wally Wood, Gil Kane, Bernie Wrightson, Alex Toth), including many of the modern era's top talent (Alan Moore, Neil Gaiman, Marv Wolfman, George Perez, Jose Luis Garcia-Lopez, Mike Grell, Frank Miller, Bruce Timm, Alex Ross, Darwyn Cooke, Jim Lee, Geoff Johns) . The list of reference is long!

Running the business of DC Comics over the decades covers territory far beyond the comic book itself. Inside you will also find just as many rare images and stories about DC characters in TV, film, animation, toys and games, parades, commercials, stage productions and many other forms of marketing in the past 75 years.

This hardcover clearly cost a pretty penny to produce and import. As a tip for any fan on the fence about pulling the trigger on this big purchase...I would not bet this edition will be available for a any significant amount of time. Once it is sold out, it is very likely to become a collectible prize and rise in value. Amazon's introductory price is a bargain. In fact I would say Amazon is losing money on the shipping cost of this book alone.