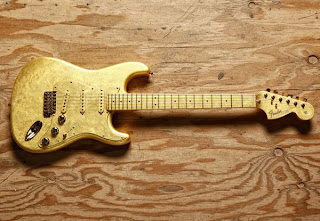 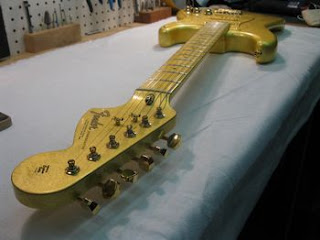 How Prince's all-gold Fender Stratocaster came to be

What: One-of-a-kind Fender Stratocaster, fully gold-plated from the top of the headstock to the bottom of the electric guitar’s signature solid body

Where: He’ll introduce and play his gilt instrument during a string of shows in December in New York and New Jersey

When: Tuesday, Wednesday and Friday at the Izod Center in East Rutherford, N.J., and Sunday and Dec. 29 at Madison Square Garden in New York

Why: Prince told his friends at Fender that he’d had a dream in which he played a gold Stratocaster. For his upcoming “Welcome 2 America” performances — his first East Coast shows since 2004 — he wanted something special and asked if such a guitar could be made. Fender execs turned to their designers at the Fender Custom Shop in Corona, Calif., where master guitar builders specialize in delivering unique instruments, for superstar musicians as well as amateurs with the desire, and the money, for something out of the ordinary.

In this case, Fender execs gave the assignment to Yuriy Shishkov, a Russian-born guitar maker. Coincidentally, only about a week earlier during a tour of the Custom Shop, Fender execs stopped at Shishkov’s work station and asked about the gold-leafing process he was working with for another customer’s order. “I mentioned that I had never built a guitar that would be completely gold leaf. I was asked, ‘Why you never did it?’ I said, ‘Nobody ever asked for it.’” A week later, Fender’s entertainment marketing director, Del Breckenfeld, came to him and said, “I think you have a customer for your gold-leaf guitar.” Prince’s gold Strat will be auctioned off after his East Coast dates, with proceeds benefiting the Harlem Children’s Zone, a community organization that serves more than 17,000 children.

How: “Gold leafing is so thin, it doesn’t change much in the tone of the instrument,” said Shishkov. “It’s thinner than any other finish you would put on a guitar; even lacquer finish is thicker than gold leaf.” The challenge? Applying gold leafing to the wood neck, frets, fret board, body, pickup covers, tuning pegs and the other parts is entirely done by hand, and Shishkov said the trick comes in twisting and turning his hands and fingers to get each piece of leafing in the right place while the adhesive used to bond it to the guitar’s surface is still tacky, yet without getting it stuck all over his hands.

“There’s only so much rotation you can do with your arms,” he said. “It’s interesting how it all came together,” said Shishkov, who started his career building guitars for himself, in a small underground cinder block workshop in the Soviet Union, which frowned on its citizens making any product the Soviet government didn’t make and approve. “Now I can bring my dream guitar to life.”
Posted by Unknown at 8:23 AM