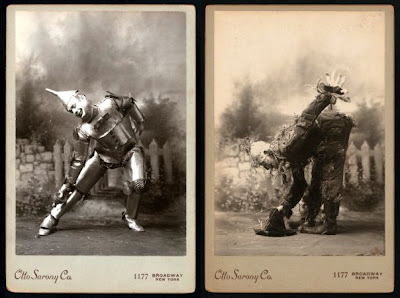 
Fred Stone (1873-1959) lived a life characterized by a love for performing and a passion for taking risks. By the age of ten, he was working with the circus and soon moved up the entertainment ladder to medicine shows, minstrel shows, variety acts, and musical comedy. His outstanding career in theatre and film spanned more than fifty years and included many memorable performances, among them the original Scarecrow in the 1903 stage production of The Wizard of Oz and Katherine Hepburn's father in the 1935 film Alice Adams . For many years he was the most consistent box-office attraction in the American theatre. Along the way he developed a range of useful talents; he was a dancer, an acrobat, an ice-skater, lariat thrower, and tight-rope walker. Another significant quality that distinguished Fred Stone was the intense loyalty of his lifelong friends, including legendary humorist Will Rogers and well-known novelist Rex Beach, who remarked, "To my way of thinking, the biggest thing about Fred is not his genius as an entertainer and his hold upon the affections of the American pubic, nor is it the fact that he made good with but few advantages; it is the fact that in spite of his enormous success he has remained a simple, honest, and charitable man. He is the Peter Pan of our day."

Fred Stone was a lifelong actor and risk-taker. It is fitting that a theatre space devoted to challenge, growth, and experimentation bears his name. 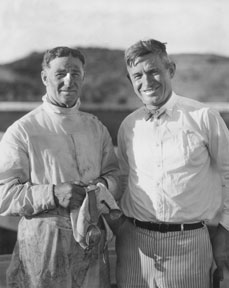 
The Marvelous Land of Oz was also influenced by the story and vaudevillian tone of the stage play.[3] The character of the Wizard was in the book a good man though a bad wizard but in the play, the villain of the piece; this is reflected by the evil part he is described as having played in the back story of this work.[4] The two armies of women, both Jinjur's and Glinda's, were so clearly intended as future chorus girls that even reviews of the book noted the similarity

hi- hoping you can help- as you seem quiote knowledgable in the original ...Oz 1902 production.

I have a water color ptg. of David Montgomery dated 1902-03 as the Tin Woodsman. It relatrs directly to the post card on your site- facial features are alike as well.

hi- hoping you can help- as you seem quiote knowledgable in the original ...Oz 1902 production.

I have a water color ptg. of David Montgomery dated 1902-03 as the Tin Woodsman. It relatrs directly to the post card on your site- facial features are alike as well.