.....FROM LOS ANGELES TIMES, OCTOBER 14, 2010...It is, without doubt, the most stomach-churning sequence among many groan-inducing scenes in "Jackass 3D," the shock stunt documentary that reaches theaters Friday. Stephen "Steve-O" Glover is strapped into a porta-potty containing 50 pounds of steaming excrement and catapulted 120 feet into the air via twin bungee cords. Hilarity and dry heaves ensue.


To hear it from the documentary's director and producer, the original idea for the stunt — dubbed "Poo Cocktail Supreme" — was very different. "We were going to have just one bungee and knock [the portable bathroom] off a cliff or something," recalled "Jackass 3D" director Jeff Tremaine, describing what would have amounted to a giant septic yo-yo.

"But us being top physicists, we reverse-engineered it to have the bungees shoot the porta-potty into the air," said the movie's producer Spike Jonze. The Oscar nominee, who co-created "Jackass" in 1999, elucidated the group-think involved: "Somebody has an idea and everyone else tweaks it."


The sequence is rendered even more revolting thanks to 3-D effects that shower the audience with virtual feces. But it also encapsulates everything that has made the "Jackass" franchise immensely popular over a 10-year run that spans a hit MTV reality series, a video game and now a trilogy of films. The stunt combines needless risk, intentional self-harm and ritual humiliation to achieve high-concept/lowbrow slapstick of the first order.

The third film stands as a testament to the franchise's continuing bankability, even while its staying power comes as no small shock to founding Jackass and breakout star Johnny Knoxville ("The Dukes of Hazzard"). 2002's "Jackass: The Movie" was shot for about $5 million and domestically grossed $64 million, while 2006's "Jackass Number Two" (um, get it?) cost $11.5 million to produce and took in nearly $73 million at the box office.

For all its expensive 3-D bells and whistles, the third film cost $20 million, Tremaine said.

"We didn't even think this [stuff] was going to make it on television," Knoxville said. "I still feel like I'm getting away with something by getting it into movie theaters."

But the new film marks a maturation process as well. Although all the marquee Jackasses are still in the mix, after a protracted battle with drug and alcohol addiction, Glover, 36, is now 2 ½ years sober, mandating a moratorium on the on-set beer consumption that abided during the filming of the first two "Jackass" movies.

Glover says he was on cocaine for most of the first movie and described feeling "excited and scared" to film absent any chemical will power.

"This one was important to me because I really wanted to prove to myself that sobriety hasn't turned me into a lame, boring wimp," he said. "In another sense, it could be argued that whatever dignity I've managed to scrape together in the last 2 ½ years, I've really discarded."

And contrary to the Peter Pan nature of daredevil antics such as playing tetherball with a beehive, running a gantlet of Taser guns and playing pin the tail on the donkey with a real, very ornery donkey, Chris Pontius, 36, Jason "Wee-Man" Acuña, 37, and Knoxville, 39, are no longer lost boys. They're men creeping up on middle age.

The real game-changer, though, is the sequel's adoption of 3-D effects that very literally bring another dimension to such knuckleheaded stunts as Knoxville jumping off the top of a pine tree dressed as Santa Claus or even the super-slo-mo depiction of Acuña getting slapped across the face with a large fish.

Paramount, which is distributing the movie via its MTV Films division, suggested the sequel be filmed with the kind of high-tech 3-D cameras pioneered by James Cameron for such movies as "Aliens of the Deep" and "Avatar." But Knoxville was initially reluctant to embrace the new technology for fear of having to rein in stunts to fit the cameras' technical parameters. Or that the interference of crew members from outside the "Jackass" fold would effectively tamp down the action.

"I was very negative," said Knoxville. "I didn't want to worry, 'Oh, you can't get within 10 yards of the camera and you can't go outside this line.' That doesn't work with us. And we'd have a new 3-D crew. We've been together 10 years. Outsiders, we're leery of."

A test using the cameras persuaded everyone involved, however, that shooting in 3-D — as opposed to tacking on three-dimensional effects in post-production — could be the kind of spontaneous and mobile process to which the "Jackass" crew is accustomed. Special custom rigs were designed that included super-light cameras to accommodate their run-and-gun style and a high-definition Phantom 3-D camera capable of shooting 1,000 frames per second was procured in the name of several decidedly asinine sequences.

"I'm pretty sure it's the most expensive 3-D camera ever made," said Tremaine. "And we built this thing and then the things we're having ideas like, 'Let's shoot a … [rubber sexual aid] out of a bazooka at the camera.' "

According to Knoxville, between February and August of this year, the cast filmed enough footage for two movies and, buoyed by a new burst of creativity and camaraderie, had no intention of stopping. But studio executives called an "intervention" to halt filming.

The news uncorked a wellspring of emotion for Knoxville — a guy more likely to get knocked on his butt than to wear his heart on his sleeve. "There are a few times guys cry in the movie. But that was the only time I cried," he said.

"Because I love it," Knoxville said. "This is what we do. We don't make any plans. We don't know if we'll ever do another movie. There's all these shot ideas, all these ideas that are written. Will they sit there forever?"

Under his breath, the stuntman added: "I'm pretty emotional."

IN GLOVERS OWN WORDS FROM THE ARTICLE: 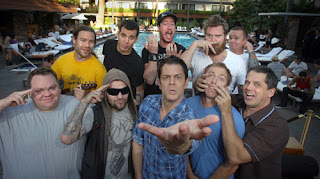 
But the new film marks a maturation process as well. Although all the marquee Jackasses are still in the mix, after a protracted battle with drug and alcohol addiction, Glover, 36, is now 2 ½ years sober, mandating a moratorium on the on-set beer consumption that abided during the filming of the first two "Jackass" movies.

Glover says he was on cocaine for most of the first movie and described feeling "excited and scared" to film absent any chemical will power.

"This one was important to me because I really wanted to prove to myself that sobriety hasn't turned me into a lame, boring wimp," he said. "In another sense, it could be argued that whatever dignity I've managed to scrape together in the last 2 ½ years, I've really discarded


The real jackass is the producer who brags about using cocaine and I hope the police or District Attorney reads this for the last time I checked the law, which was two minutes ago, it reads thusly:

Cocaine and crack are Class A drugs - illegal to have, give away or sell. Possession can get you up to seven years in jail. Supplying someone else, including your friends, can get you life and an unlimited fine.

ARTICLE FROM 2008 ON STEPHEN GLOVER'Jackass' Star Steve-O Hospitalized For Observation After Friends, Family Become Alarmed By His Behavior


Friends, family became concerned for the stuntman's life after he said in e-mails that he was ready to die.

Steve-O has been hospitalized for observation, sources close to the stuntman confirmed to MTV News on Thursday (March 13).

On Sunday, the "Jackass" star was planning to execute a stunt where he would take a 25-foot fall onto concrete, a fall he hoped to break with cardboard boxes and trash cans, so long as his friends showed up to provide them. "50 Cent got shot nine times at once and survived, and he is forever a legend," Steve-O (real name: Stephen Glover) wrote to his e-mail list. "I betcha I break more than nine bones if nobody comes with something to catch me, because, mark my words, I will fall!" In separate e-mails, he wrote repeatedly, "I'm ready to f---ing die."

But it wasn't an injury from this stunt that landed him in lockdown at Cedars-Sinai Medical Center on Sunday, after being taken there by Johnny Knoxville and Dimitry Elyaschevich, according to their mutual friends. Rather, it was concern over his recent behavior that precipitated it. "He's in the hospital now," one of his friends told MTV News. "Not for injury, for observation." His friends estimate that he'll be in the hospital for 14 days.

A week before the stunt, Glover had been arrested for allegedly vandalizing his neighbor's property, and a felony drug charge for possession of cocaine during the incident was added this week, his arraignment for which was scheduled for Thursday. As Glover was not available to enter a plea, an attorney went to court on his behalf to explain the circumstances and ask for a continuance, so the arraignment was pushed back until March 26.

It was Glover's arrest a week ago that precipitated this situation, however. As a result of the vandalism charge and the subsequent media attention, Glover was evicted from his apartment and decided to do the stunt as a last hurrah, to take advantage of the clearing from the loft. While planning that stunt, Glover made references to dying and suicide in his e-mails, causing his friends and family the most concern, especially on the heels of his girlfriend rejecting a marriage proposal, which he also wrote about. "These last e-mails definitely had something to do with it," another friend said, "but he's been headed towards this for a few months."

"My family is convinced that I've got bipolar disorder," Glover wrote in November. "I don't know if I agree, but I've come to terms with the fact that I'm somewhat f---ed in the head. ... I agreed to go to a psychiatrist for a professional evaluation, to try and figure out what specific category of nutjob I fall into. I've decided that I want to make a rad project out of finding what the f--- is wrong with me. I sure hope this psychiatrist is down with me having my evaluation filmed."

No word on whether Cedars-Sinai is allowing Steve-O to document his lockdown, as a rep for the hospital could not confirm his admittance, citing patient confidentiality, but regardless, his friends predict he'll be fine in a few weeks. "Once he dries out in there," one friend said, "he'll be back to happy old funny Steve-O."
Posted by Unknown at 7:57 AM