SCRIPT for the 1937 reissue of the 1931 Hal Roach Studios classic Beau Hunks. 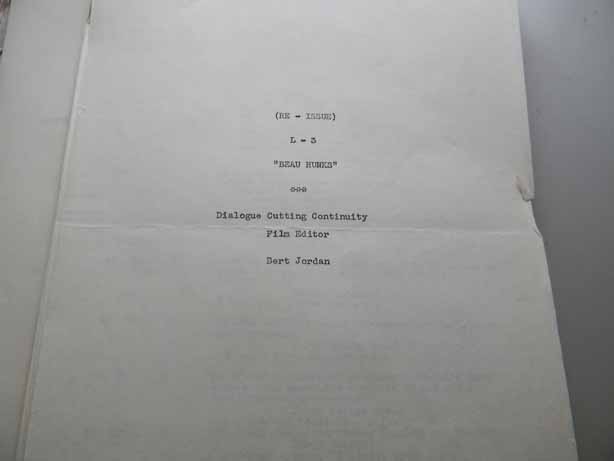 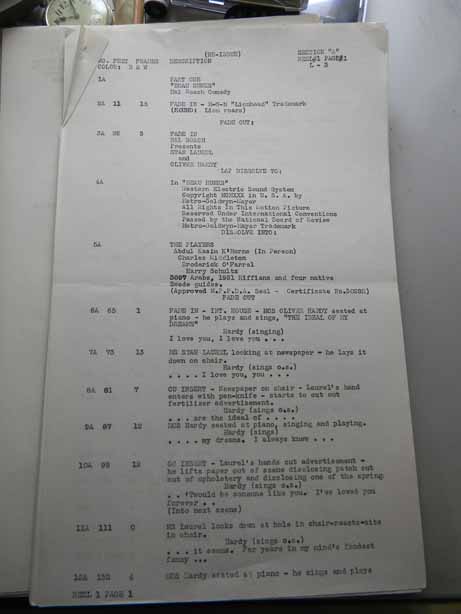 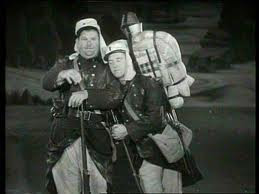 Beau Hunks is a 1931 movie starring Laurel and Hardy and directed by James W. Horne. Beau Hunks is both a reference to Beau Geste and a pun on the mild ethnic slur Bohunk (a portmanteau of "Bohemian" and "Hungarian."). At 37 minutes long—four reels—it is the longest L&H short.

PLOT
Stan Laurel and Oliver Hardy join the French Foreign Legion after Ollie's sweetheart Jeanie-Weenie (only ever seen as a photograph) rejects him, as it is the only place where Ollie can forget her. When they arrive at the barracks in Algeria, they discover that not only are the other soldiers trying to forget lost loves, their lost loves all happen to be the one and the same woman Ollie is trying to forget: Jeanie-Weenie! On an expedition to Ft. Arid, a fortress besieged by native Riffian tribesmen, the duo get cut off from the rest of the regiment in a sandstorm and reach the fortress before the others. Surprisingly, the boys defeat the Riffians by themselves and the leader of the Riffians is revealed as another one of Jeanie-Weenie's conquests.

The French Foreign Legion scenario was repeated in Laurel and Hardy's 1939 feature The Flying Deuces.

James W. Horne as the Chief of the Riff Raff

Charles B. Middleton as the Commandant

In the opening scene, Ollie warbles on the piano as Stan spreads out a newspaper page on a leather upholstered chair and cuts out a fertiliser ad, accidentally tearing out a section of upholstery as he does so, exposing the springs beneath. After Ollie finishes his song, he announces to Stan that he is going to be married. This hilarious interchange follows:

Ollie: Didn't I just tell you I was going to be married?

Ollie: Why, a woman, of course. Did you ever hear of anyone marrying a man?

Ollie: This is no time for levity

Immediately afterwards, Jeanie-Weenie breaks off the engagement via a bluntly-phrased letter. Ollie stands up from the piano and sits down suddenly on the other chair with the exposed springs, which launch him up to the ceiling, screaming.

On arrival at the Legion's HQ, the boys decide that perhaps life in the Legion is not for them, so they ask to leave on the grounds that Ollie can no longer remember her.

Captain: (To Ollie) Why did you join the Legion?

Stan: He joined to forget!

Captain: (To Ollie) What? You forgot what you came here to forget?! and orders them to stay.

As a tremendous circular climax, the caught Riffian leader is shown to have a locket also containing a picture of Jeanie-Weenie. Stan exclaims: "She's been around the world!", which elicits a horrified moan from Ollie.

The most memorable scene is when Stan and Ollie, defending Ft. Arid, spill barrels of nails on the ground inside the fort and injure the barefooted Riffian soldiers.

Stan: You don't believe me.

Ollie: Yes I don't beli- what do you mean you don't believe me?!

Ollie: She's the sweetest girl in the world, and she's mine, all mine. Well what do you think on it?

Stan: What does 'levity' mean?

Ollie: What are you doing?

Stan: Somebody knocking on the phone.

Ollie: Go to the door!

Ollie: Didn't you read it?

Stan: Yeah but I wasn't listening.

] The Dutch musical groupA Dutch musical ensemble, named The Beau Hunks Orchestra after that film, was formed in early 1992 for the purpose of performing some of the soundtrack music at an Oliver Hardy centennial celebration in Amsterdam. They went on to release a number of recordings of the film music of Leroy Shield and some other composers, notably Raymond Scott.

Trivia
Hal Roach once said that this, of all the L&H films he produced, was his favourite.

Jeanie-Weenie, the woman in the photograph, was actually Jean Harlow.

James W. Horne, in his role as the Riff Raff tribesman, is credited as Abdul Kasim K'Horne in the closing credits.

The film was titled Beau Chumps in the United Kingdom; a pun on Beauchamps.

Marvin Hatley, composer of Laurel and Hardy's famous theme tune "The Cuckoo Song", plays a tribesman.
Posted by Unknown at 8:19 AM