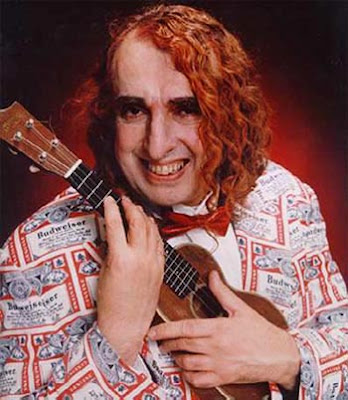 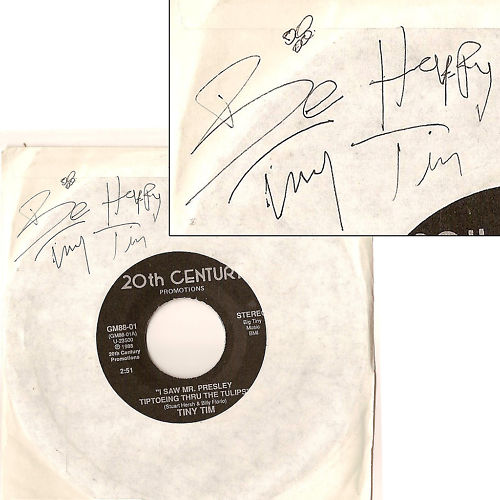 Entertainer. Born Herbert Buckingham Khaury to a Lebanese father and a Jewish mother he became famous for his ukulele playing and falsetto voiced singing. A native of New York City the high school dropout began singing in clubs and participating in talent shows hoping to be discovered. He used several stage names before deciding on "Tiny Tim" which was based on the character in Charles Dickens' "Christmas Carol". His big break came when he was asked to appear on the American variety show, "Rowan and Martin's Laugh-In". The public was enthralled with his unique act and soon he appeared on "The Tonight Show" with Johnny Carson as well as the "Ed Sullivan Show" and the " Jackie Gleason Show". In 1968 he released his first album, "God Bless Tiny Tim" which included is biggest hit "Tiptoe Through the Tulips". The following year he released two more albums including a popular children's album. 1969 was also the year he married his first wife, a seventeen year old known as "Miss Vickie. They were married on "The Tonight Show". The marriage ended in divorce but they did have a daughter together named Tulip. By the 1970s his popularity was declining. He did perform some in Las Vegas and even joined a circus for awhile but he never reached the popularity that he enjoyed in the 1960's. During the 1990s he was making a nostalgic comeback with appearances on the Conan O'Brien and Howard Stern shows. However, in 1996 he suffered a heart attack while performing at the Ukulele Hall of Fame. He continued to tour after that incident and suffered another heart attack a few months later that proved to be fatal. The eccentric entertainer was buried with a ukulele in his hand and a tulip. (bio by: Bigwoo)

Cause of death: Heart attack

Maintained by: Find A Grave