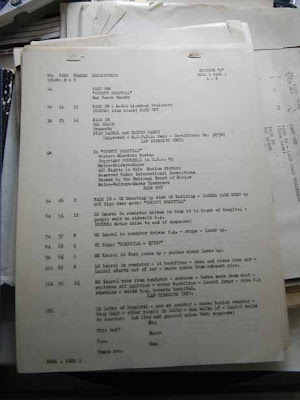 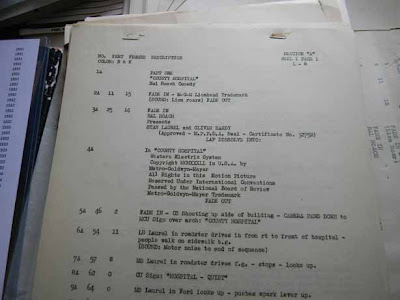 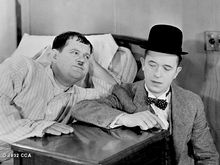 County Hospital is a Laurel and Hardy short film made in 1932. It was directed by James Parrott, produced by Hal Roach and distributed by Metro-Goldwyn-Mayer. Ollie is in hospital with a broken leg, Stan comes to visit and ends up getting Ollie told to leave, on the way home Stan crashes the car.

Plot
Ollie has broken his leg and he is in County Hospital. Stanley comes to visit but gets lost on the way to the room. But he does make it to Ollie's room and tells him he didn't have anything else to do, so he thought he'd come to see him. Ollie thanks Stan somewhat sarcastically for the visit. Stan has also brought Ollie a gift: a bag of hard boiled eggs and nuts. Ollie is not impressed and complains he can't eat them, suggesting that Stan could have brought candy. Stan complains that candy costs too much and Ollie hasn't paid him for the last box.

Stan starts to eat one of the eggs which he seasons with a salt cellar he's brought in his pocket. Then he drops another one into Ollie's drinking water jug. Ollie tells him not to put his hand in the pitcher to get it ("I have to drink that water!"), so Stan retrieves the egg by pouring the water (and the egg) into a glass. Then he pours the water back into the pitcher, catching the egg. In drying the egg, Stan spills the water onto Ollie and Ollie hits Stan over the head with a bedpan.

When the doctor (Billy Gilbert) arrives to check on Ollie, Stan absent-mindedly picks up a weight attached to Ollie's leg harness by a rope. The doctor yanks the weight from Stan propelling himself out the top-floor window. Now the doctor is hanging by the rope; in addition, his weight has lifted Ollie up, suspending him over the bed. The rope snaps and the doctor grabs the window at the last moment. Ollie falls on to the bed breaking it. The commotion brings a number of nurses in to the room. One of them puts a hypodermic syringe on the chair. While the doctors attend to Ollie, Stan manages to get the doctor back inside, but not without splitting his trousers.

Outraged and embarrassed, the doctor first dismisses all the other doctors and nurses attending to Ollie at the moment and then orders Ollie to leave at once. Ollie blames Stan for ruining his peaceful stay in the hospital and tells Stan to get his clothes, still grumbling about Stan's gift of "hard-boiled eggs and nuts!" Stan fetches Ollie's clothes (involving a short comic episode with the closet light bulb) but has a hard time getting Ollie's trousers on. Exasperated and impatient, Ollie tells Stan to get a pair of scissors and cut the leg off, but of course, Stan at first thinks Ollie was asking him to cut off his leg! In exasperation, Ollie specifies he meant cut the leg of his trousers off so he can put them on. Stan cuts the wrong leg off. Ollie is annoyed and asks for the scissors so he can cut the correct trouser leg off: "Hind to front!" Ollie's roommate appears, "all aflutter" because the doctor has told him he can now go back home. He gathers his clothes and it turns out he has put Ollie's trousers on by mistake, which means Stan has cut both legs off the roommate's pair. Then Stan sits on the needle. The nurse returns to retrieve it and, finding it in Stan's rear, laughs herself silly: the syringe contains a tranquilizer, and her supervisor points out that Stan will sleep for a month.

Finally, the boys leave. Ollie wisely offers to drive, but as he can't fit in the driver's seat for his broken leg, he sits in the back seat, leaving the lethargic Stan to drive. The accidental injection begins to take effect on Stan as he starts the car, and proceeds to drive home in a daze. They narrowly miss a number of vehicles, as a panicky Ollie repeatedly tries in vain to nudge Stan awake, shouting, "Why don't you watch THAT!!" (pointing to a car Stan was about to bump into) and "Turn THAT way!!"

They finally crash into two trams and come to a halt. A police officer is on hand and tells Stan to pull over. He tries to, but the smash-up has bent the car into a 90-degree angle and it only moves in a circle. The police officer starts writing a them a ticket.

Billy Gilbert as The Doctor

Belle Hare as a Nurse

Lilyan Irene as a Nurse

Dorothy Layton as a Nurse

Sam Lufkin as a Police Officer

Baldwin Cooke as an Orderly

Ham Kinsey as an Orderly

Frank Holliday as a Visitor
Posted by Unknown at 8:08 AM