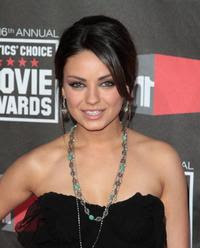 According to published reports, Mila Kunis is currently in talks to join 'Oz, the Great and Powerful' as the Wicked Witch of the West. The film begins production in July and will be released in theatres in 2013.

As previously announced, Sam Raimi is confirmed to direct Disney's highly anticipated Wizard of Oz Prequel, 'Oz: The Great and Powerful'. The deal was confirmed by Creative Artists Agency (CAA). Last January, Raimi left the Sony Pictures production of 'Spider-Man 4'. His absence from the movie leaves room for work on 'Oz'.

The story of 'Oz: The Great and Powerful', follows the future wizard, a circus wrangler in the real world, as he is carried away to the magical land by a tornado. The people who live there mistake him for a powerful being and thus, a legend is born. Studio heads, Rich Ross and Sean Bailey, are predicting major success for 'Oz'; similar to the high-grossing hit, 'Alice in Wonderland'.

Cinematical previously reported: "Scripted by Mitchell Kapner (The Whole Nine Yards), the plot concerns the back story of Oscar Zoroaster Phadrig Isaac Norman Henkel Emmannuel Ambroise Diggs (or O.Z. for short, as the rest of the initials spell out "PINHEAD"). A young circus magician from Omaha, O.Z. ends up ruler of the land also coincidentally called Oz when he mistakenly lands there in his hot air balloon. Apparently this is gaining heat because of the success of Alice in Wonderland while also coinciding with Universal's adaptation of Wicked, which is similarly an origin story inspired more than based upon the original Baum stories."

Sam Raimi has directed several horror films such as the Evil Dead series and Drag Me To Hell. Raimi is perhaps best known as Director of the Spider-Man films. Additionally, he has produced the TV series Hercules: The Legendary Journeys and Xena: Warrior Princess. A musical version of the film Evil Dead opened Off-Broadway on November 1, 2006 at New World Stages. The musical enjoyed a healthy run, closing on February 17, 2007. Several regional theatres continue to perform Raimi's, Evil Dead.
Posted by Unknown at 8:35 AM