After a 6 1/2-year wait as a small craft voyaged through space, planetary scientists finally got an up-close look at Mercury's pockmarked surface this week — at the pale, spidery impact crater named Debussy, at chains of smaller craters around the north pole they'd never seen before and at other heretofore mysterious polar regions. 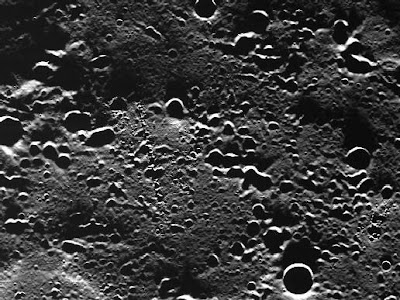 Images taken by the Messenger spacecraft — the first ever to orbit the hot, tiny planet — began arriving Tuesday. The first, received by the Johns Hopkins University Applied Physics Laboratory in Laurel, Md., at 5:20 a.m. Tuesday, captured areas that might host water in the form of ice. It was soon followed by hundreds more, some of which NASA released Wednesday.

The spacecraft, which launched in 2004 and entered orbit around Mercury on March 17, will circle the solar system's innermost planet for a year, mapping out its hot, rocky surface and providing what's anticipated to be a wealth of information never gleaned before during quick glimpses from fly-by missions. 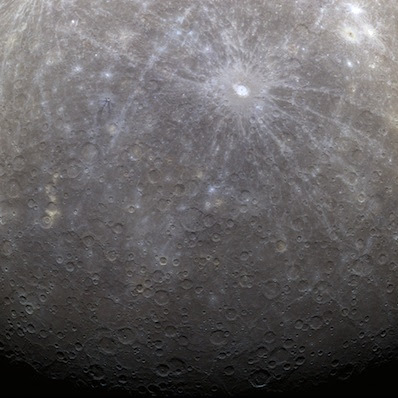 "It's just a wonderful adventure for those of us on the science team that have front-row seats," said Sean Solomon of the Carnegie Institution of Washington, the mission's principal investigator.

Among the mission's objectives: map out the planet's surface (including shadow-veiled areas near the poles), observe its magnetic fields and examine its surface composition.

One of the most intriguing objectives is to figure out whether water ice exists at the planet's north and south poles. "That's a hypothesis we've been aching to test now for 20 years," Solomon said.

Ice might well exist there, he added, even though Mercury resides, on average, slightly more than a third as far from the sun as the Earth does, so temperatures can soar beyond 800 degrees Fahrenheit. Some areas in craters near its poles lie in permanent shadow — perhaps 300 degrees below zero Fahrenheit and probably at least cold enough to keep any ice from escaping the planet's surface, he said. Instruments aboard Messenger should settle the matter. 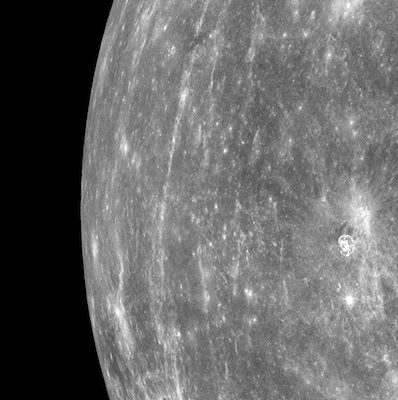 Planetary scientists have strained to learn about Mercury from telescopes on Earth and caught tantalizingly brief glimpses of it from spacecraft whizzing by: Mariner 10 in 1974 and 1975 and Messenger in 2008 and 2009. They know it's uncommonly dense, and rich in metals such as iron. But they don't know how it got so dense nor why it has an active magnetic field, despite its small size, when Mars, a larger planet, does not. They hope that new insights into Mercury could reveal much about how the planets formed in the early solar system.

A whole set of challenges had to be overcome to get Messenger to this point.

For one thing, because Mercury's surface is so hot the spacecraft has to deal with that reflected heat plus 11 times the solar radiation than would a craft orbiting Earth. Since Messenger's orbit is elliptical — 120 miles from the planet at its closest point and 9,000 at its farthest — the spacecraft should have time to cool off when it's far away.

For another, because Mercury is so close to the sun, the solar gravitational force is especially powerful. To resist that pull, the spacecraft had to be loaded with hydrazine fuel — about 1,200 pounds of it, said Eric Finnegan, Messenger's mission systems engineer, or more than half of the spacecraft's weight.

The scientists also had to plot Messenger's course through space with particular care, using several planetary fly-bys — once by Earth, twice by Venus and thrice by Mercury — so that the gravitational pull of these planets could tweak Messenger's course to miss the sun's clutches and be captured by Mercury's gravity.

By Thursday, researchers expect to have acquired 1,500 images of Mercury. In addition, the seven-piece suite of instruments includes spectrometers to analyze the atmospheric and surface composition and measure charged particles, as well a magnetometer to map out the planet's magnetic field.

The spacecraft will orbit Mercury every 12 hours for the coming year, getting information from all sides of the planet, which rotates extremely slowly. Mercury's day is about twice as long as its year, which lasts for 88 Earth days.

Once the spacecraft runs out of fuel, its orbit will decay until Messenger crashes into Mercury's surface.

Been looking forward to this since launch several years ago.