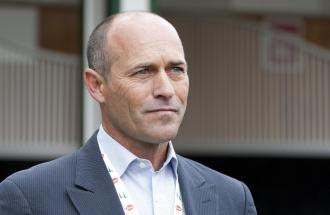 Barbara D. Livingston
Gary Stevens retired from race riding in 2005.
He began the year as down-and-out veteran jockey Ronnie Jenkins on the short-lived HBO series “Luck” and had plenty on his plate the rest of the year with his television responsibilities for NBC and HRTV, but in recent weeks, Gary Stevens decided he needed to get fit, so he has sequestered himself in Washington state, where he has been working out, and, on Friday, breezed horses at the Pegasus Training and Equine RehabilitationCenter.
“I’m fitter now than the day I quit riding,” he said in a telephone interview. “It’s pretty much been a boot camp. I’m working with a physical trainer, doing cardio, seeing a nutritionist who put me on a special diet.”
As someone who will be 50 next March, and retired from race riding in 2005, it certainly can’t hurt for Stevens to rededicate himself to getting, then staying, in shape. But considering that he is getting on horses, the natural question has to be asked of the Hall of Fame rider who came back once before from a retirement – is he thinking of doing it again?
“No,” Stevens replied.
But as the conversation progressed, Stevens became more nuanced in his answers.
“Never say never,” he added moments later.
“I knew I had to get fit,” Stevens said, elaborating. “But one of the reasons I’m up here is because I didn’t want to get on horses at Santa Anita and then have everyone asking me questions every day as to why I was doing it. If I was at Santa Anita getting on horses, even if it was just to get fit for the hell of it, people would ask me questions, and I wouldn’t know what to say, because I don’t even know.
“I’m happy with what I’m doing. There really wasn’t a better place for me to come to do this than Pegasus. Dr. Mark Dedomenico, who owns Pegasus, is a good friend and put me up in a guest house. Two of my best friends, Mike Puhich and Jason Orman, train here. More than anything, it’s just been a great place to clear my head before the start of Santa Anita.”
And what will he be doing when that meet starts Dec. 26?
“I’ve got television with HRTV,” Stevens said. “I hate to be vague. I’m enjoying the month I’ve had up here. The gym opens at 5 a.m., and I’m in there by 5:15 doing cardio. I feel great.”
So much so that Stevens said he went skiing for the first time in five years the other day, a big step for someone whose riding career was curtailed by knee troubles.
Stevens’s wife, Angie, and their daughter, Maddie, were visiting him this week at Pegasus. He said he expects to be back in California just before Christmas.
Stevens retired in 2005, with 4,888 victories, and was immediately snapped up by NBC as the network’s lead racing analyst. That was the second time Stevens retired. He first quit in December 1999, but came back less than a year later, and in 2001 rode one of the best horses of his career, Point Given, who won that year’s Preakness and Belmont and was named Horse of the Year.
Stevens is a three-time winner of the Kentucky Derby, and he was inducted into the National Museum of Racing and Hall of Fame in 1997.