THE ADVENTURES OF MICKEY MOUSE,,,1931..WIZARDOFBAUM 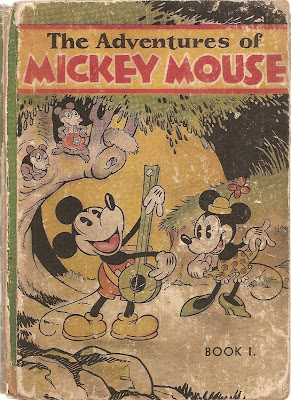 While the significance of The Adventures of Mickey Mouse (1931) stems from the facts that it is the first Disney book published for retail and that it features the pseudo-debut of Donald Duck (see below post), it is also interesting for some other aspects and is overall a very nice book on its own merits.
First of all, The Adventures of Mickey Mouse is ideal stuff for those (like me) who have a soft spot for stories where Mickey is accompanied by a bunch of other vintage characters, as seen in this spread illustration on the reverse of its front cover: 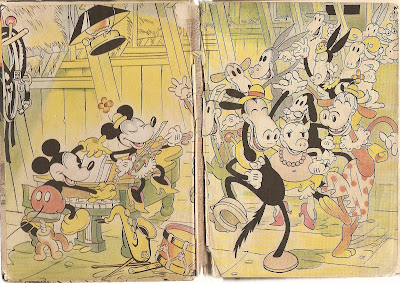 This spread illustration also signals that the book will reflect the tone of the Mickey Mouse cartoons of the era. The setting clearly belongs to a farm building, in line with the 'barnyard' origin of Mickey Mouse. The depicted event is a musical gathering, which was the central theme of a large part of the earliest cartoons.
Below scans are those of the credits page (the image therein will be used in later Mickey Mouse books as well), copyright page and the dedication page: 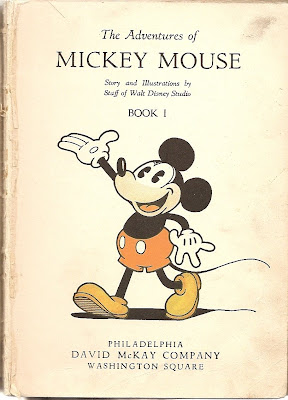 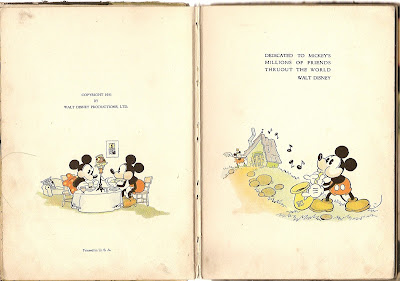 The image on the dedication page (above right) actually contradicts the content of the story featured in the book. In that image, Minnie is seen standing by a house proper to her size; however, in the story, both Mickey and Minnie are portrayed as real-life mice-sized creatures living in "nests": Minnie's "home nest" is said to be "hidden, soft and warm, somewhere in the chicken house" while Mickey "lives in cozy nest under the floor of the old barn". Below image is a scan of the full-page illustration prior to the first text page, showing the interiors of Mickey's nest, perfectly capturing the "cozy" nature expressed in the text: 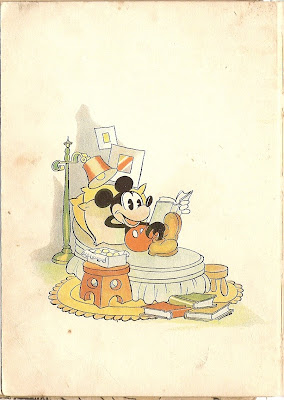 And below image is a scan of an illustration depicting the exteriorsof the same nest, similarly made beautiful by the subtle use of soft-tone coloring, as well as by the simple but very charming props: 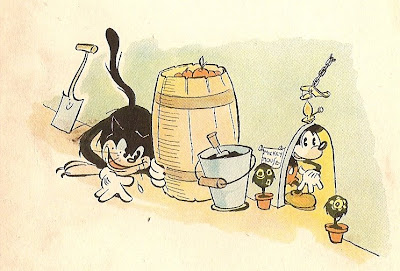 And below are scans of two pages further in the story, where Minnie's nest is depicted (not to mention her patched panty in full view!): 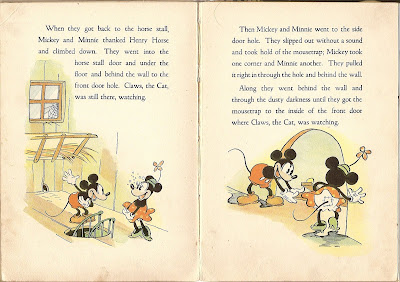 The plot of the story is very simple: Mickey tricks the ever-menacing Claws the Cat into getting caught in a trap he'd set up for Mickey and safely holds a party for his farm friends. These friends include many characters familiar from Mickey cartoons of the era, some of which turned out to be long-lasting and some of which largely faded into oblivion over the years. These are, first and foremost, Horace Horsecollar and Clarabella Cow, who are named here as "Henry Horse" and "Carloyn Cow". It would be interesting track down when these two of Mickey's oldest friends were first named under the names we know them today. Other mentioned characters are Patricia Pig, Donald Duck (see below post), Clara Cluck the Hen, Robert Rooster, Long Dog the Dachshund, George and Gertie Goat.
Patricia Pig is portrayed in several of the illustrations, including the below: 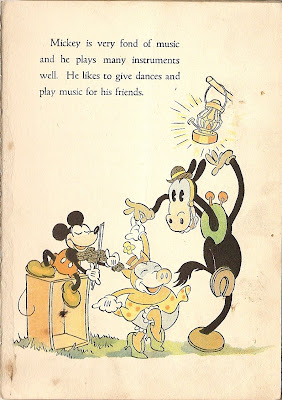 In addition to the early Mickey Mouse cartoons since 1929, Patricia Pig was also featured in Mickey Mouse daily strip and Sunday page comics in the early 1930s. Her comics appearances would become less sparodic in the 1940s and she would disappear from newspaper comics from early 1950s onwards ('though she would be revived in the 1980s).
On the other hand, I can not spot Clara Cluck, or any hen for that matter, in any of the illustrations in The Adventures of Mickey Mouse even though she is mentioned twice in the text. More curiosly, -not counting an unmaned hen in Mickey's Follies(1929)- the hen known as Clara Cluck does not seem to have appeared in Mickey cartoons by then either! So, Donald Duck is not alone in getting a reference in this book prior to a cartoon appearance... Clara Cluck wouldn't appear in newspaper comics in the 1930s despite her highlight performance in the popular cartoon Orphan's Benefit (1934), but she would have her own comics stories in comics magazines after Orphan's Benefit's color remake in 1943.
As for "Robert Rooster", I cannot spot any rooster in any of the illustrations, either. Actually, I am not aware of any Disney character explicitly named as such in any other media, but therewas a rooster in at least two Mickey Mouse cartoons from 1929:The Plowboy and Mickey's Follies.
On the other hand, "George and Gertie Goat" does appear in several of the illustrations. Goat characters had also appeared in early Mickey Mouse cartoons, but I am not aware if they were ever named in that media. A similar goat character named Gideon Goat would appear in Mickey Mouse newspaper comics in the first half of the 1930s before disappearing into complete oblivion.
"Long Dog the Dachshund" also does appear in one illustration, the beautiful one scanned below. He had debutted in the earliest Mickey Mouse cartoon, Plane Crazy (1928) and appeared in the earliest Mickey Mouse daily strips, but could not become a long-lasting character. 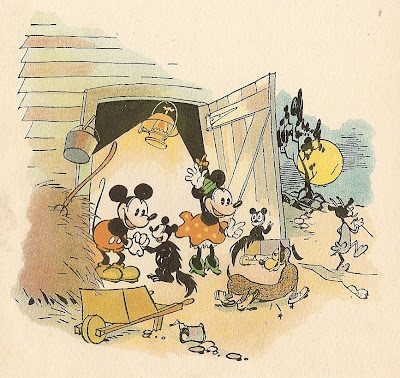